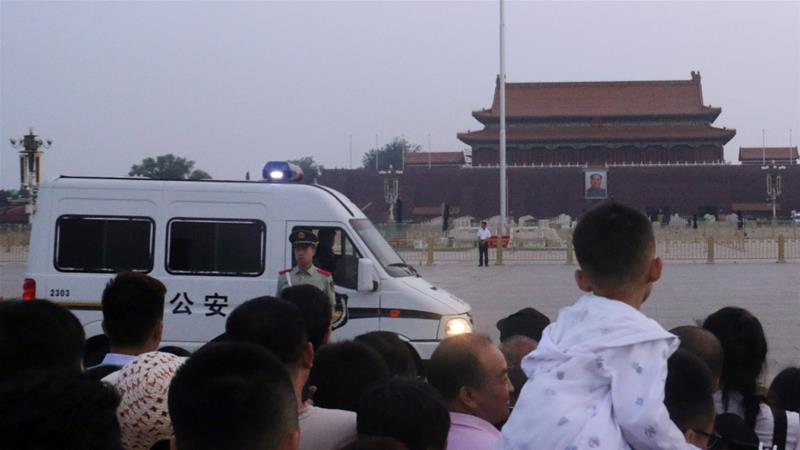 China has voiced its “strong dissatisfaction and firm opposition” towards comments by the United States on the 30th anniversary of the Chinese government’s violent response to student-led protests in Beijing’s Tiananmen Square.

In a statement on Monday, US Secretary of State Mike Pompeo urged Beijing to mark the June 4 anniversary by providing a full account of the bloody crackdown and releasing all prisoners jailed for fighting human rights abuses.

His comments elicited a strong response on Tuesday by the Chinese embassy in the US, which said in a statement that Pompeo’s remarks were made “out of prejudice and arrogance” and grossly interfered with China’s internal affairs.

It added that the Chinese government and people reached a verdict long ago on what it called “the political incident of the late 1980s”, and that China’s “rapid” economic development and “continuous progress in democracy and the rule of law” showed it was following the right path.

“China’s human rights are in the best period ever,” it said.

Thirty years ago, the Chinese government ended a weeks-long standoff with pro-democracy demonstrators by declaring martial law and ordering armed troops into Tiananmen Square to break up the protests.

Beijing has never given a toll on how many died in the violent crackdown in the heart of the capital, but estimates by human rights groups and activists range from a few hundred to thousands.

China at the time blamed the protests on counter-revolutionaries seeking to overthrow the Communist Party.

Over the years, the Chinese leadership has censored any discussion of the protests and crackdown, ensuring that people either never learn about what happened or fear detention if they dare discuss it openly.

But there were rare public acknowledgements of June 4 this year.

In comments made on Sunday during a major Asian security summit in Singapore, China’s Defence Minister defended the crackdown as the “correct” policy to end “political turbulence” at the time.

The nationalistic state-run tabloid Global Times hailed the government’s handling of Tiananmen as a “vaccination” for Chinese society “against any major political turmoil in the future”.

Still, the government stepped up security around the square on Tuesday, while foreign journalists were not allowed to approach the site.

“This is always a very sensitive moment for the Chinese leadership,” Al Jazeera’s Adrian Brown, reporting from Beijing, said.

“They continue to remain unrepentant for the actions of the military 30 years ago, essentially saying if the army hadn’t moved in to Tiananmen Square to clear it from the protesters then China would have been on the brink of civil war and would have never gone on to be the world’s second-largest economy,” he added.