DOHA, Qatar — Christian Pulisic said Thursday that he is “feeling better” after suffering a “pelvic contusion” in the U.S. men’s national team’s Tuesday win over Iran, but did not commit to playing in Saturday’s knockout-round game against the Netherlands.

He also explained what, exactly, a “pelvic contusion” is. After a team spokesman suggested that “it's what it sounds like,” Pulisic said: “No, but at the same time, it's not.”

“Like, I didn't get, like, hit in the balls,” he said with a laugh. Tim Weah and others in the room chuckled as well.

“It was very painful,” Pulisic continued. “You know, that bone is there for a reason, to protect you, I think. And I hit it well. And it was sore, but like I said, I'm getting better.”

Here is Christian Pulisic talking, in full, about his pelvis and his balls pic.twitter.com/cCObl6BP9a

Pulisic suffered the injury while scoring the only goal of the USMNT’s must-win game against Iran. “I took a knee … to a nice pelvis area — it was not nice,” he said Thursday. He stayed down in the mouth of the goal for minutes while receiving treatment. He returned to the game and gutted out a few minutes until halftime, but winced in pain while he moved gingerly. Head coach Gregg Berhalter later said that Pulisic was feeling some “dizziness.” Berhalter removed him from the game, and trainer Harris Patel accompanied him to a nearby hospital.

While en route, Pulisic followed the game on Patel’s phone, “and it was like the hardest thing,” he said. Medics checked his “blood sugar and everything, and it was flying through the roof,” but not because there was anything wrong with him; “it was me stressed watching the game,” Pulisic said.

At the hospital, Pulisic was diagnosed with the “pelvic contusion.” But he FaceTimed with players once they returned to their locker room after a 1-0 win. By the time they’d returned to the team hotel — the luxurious Marsa Malaz Kempinski on The Pearl — Pulisic was there to greet them with a boyish, overjoyed smile. He filmed their arrival on his phone, and embraced Tim Weah and DeAndre Yedlin, among others.

When asked whether he would train on Thursday night, Pulisic said: “I'm gonna go meet now with the team and the medical staff, and make a decision on today. Just kinda see how I'm feeling, taking it day by day right now. But doing everything in my power to be able to be out there on the field Saturday.”

When asked whether there was any chance he might not play on Saturday, he paused for a second, and smiled. “That's a good way to word the question differently,” he said with a laugh. “I'm taking it day by day right now, and I will do everything in my power to work with this medical team and make sure that I can play.” 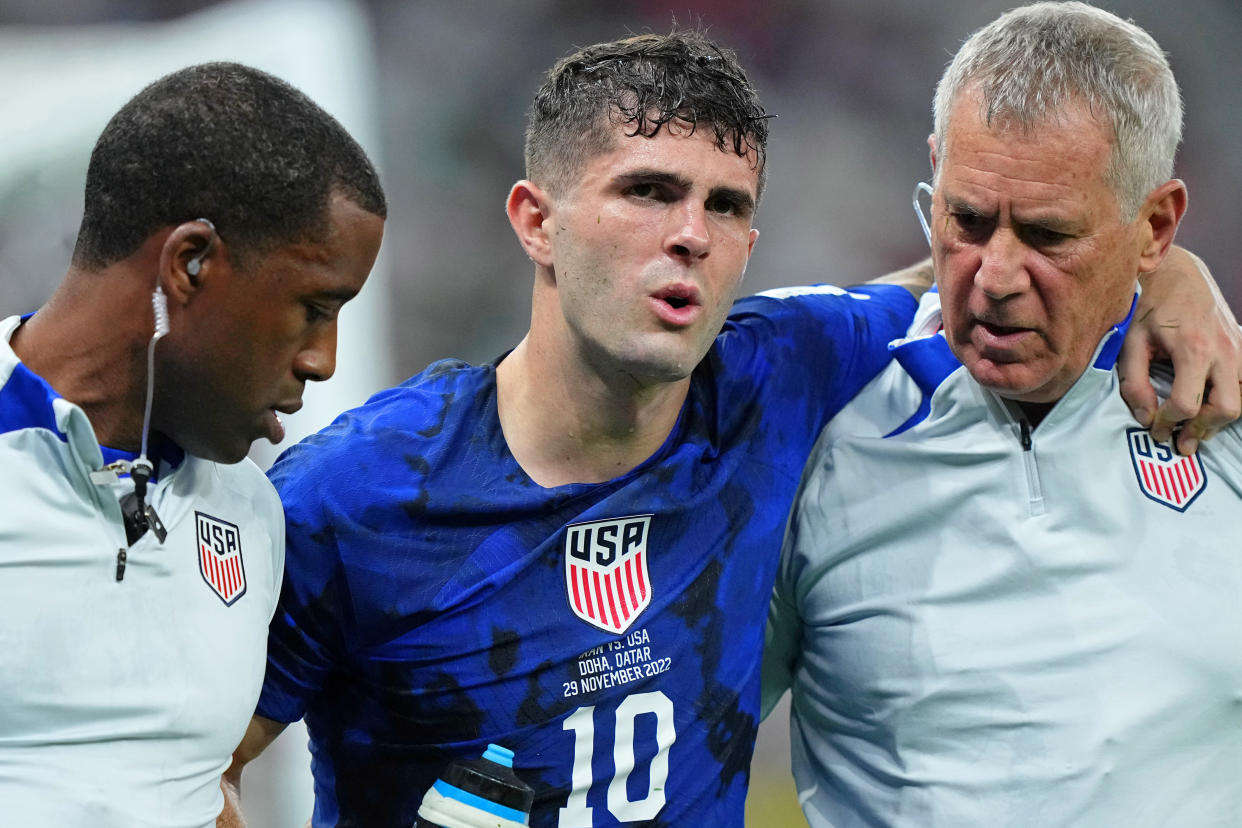 A USMNT spokesman also said that Josh Sargent, who left Tuesday’s game in the second half with an ankle injury, was “day to day.”

If Sargent can’t play, Haji Wright or Jesús Ferreira would likely start in his place up top.

If Pulisic can’t, Brenden Aaronson would be the most analogous replacement on the left wing. Aaronson has started in the past when Pulisic hasn’t been fit — including against Mexico last November in World Cup qualifying — and replaced Pulisic at halftime of Tuesday’s game. Gio Reyna would also be an option, but has only played eight minutes off the bench all tournament.

Pulisic and Sargent will likely remain “day to day” until lineups are announced within 90 minutes of kickoff on Saturday. U.S. Soccer has no incentive to give the Netherlands a jumpstart on preparing as if either player will or won’t start. After initially saying that the first 15 minutes of Thursday’s training session would be open to media, it closed training entirely.