Collection of 180 English silver crown coins dating from reign of Edward VI in the 1550s sells for £331,000 after bidding war

One man’s impressive collection of 180 English silver crown coins spanning over 470 years has sold for £331,000 after a bidding war.

American collector David Hoover amassed the pieces over the past decade who has a fascination with this type of coinage.

He acquired examples from the British Museum and had rarities from the reign of Edward VI in the 1550s through to Queen Elizabeth II.

The top performer was a 1643 Charles I ‘Silver Pound’ struck at Oxford University during the English Civil War which made £11,250.

A 1603 James I crown from the year he ascended to the English throne made £3,750, with another James I coin made from Welsh silver fetching £5,750.

Also in the collection was a 1703 Queen Anne crown struck by genius mathematician Isaac Newton from silver captured at Vigo Bay from the Spanish. It sold for £1,625.

A 1746 George II Crown produced from Peruvian silver captured by Admiral Anson went for £3,000, and a 1877 Victoria Crown struck in the year of her Golden Jubilee made £2,325.

More recent examples were a 1953 Coronation proof crown of Elizabeth II which sold for £400, while a proof silver crown marking Prince George’s birth in 2013 went for £600.

Gregory Edmund, specialist at Spink & Son, said that the staggering figure made from auctioning the collection was thanks to the reawakening of coin collecting thanks to the pandemic.

He said: ‘The impressive collection was amassed with dedication and skill over the past decade by an American collection and included great rarities from the reigns of King Charles I, examples of which are only known from this sale and coins in the British Museum.

‘David advised us that once he had completed the ‘date run’, the remaining few coins became prohibitively expensive and so he had elected to sell at this point.

‘He was very pleased with the results which show the strength and enthusiasm for coin collecting that has been reawakened by the pandemic.

‘The Golden Jubilee of Queen Victoria coin sold for a European record of £2,375. 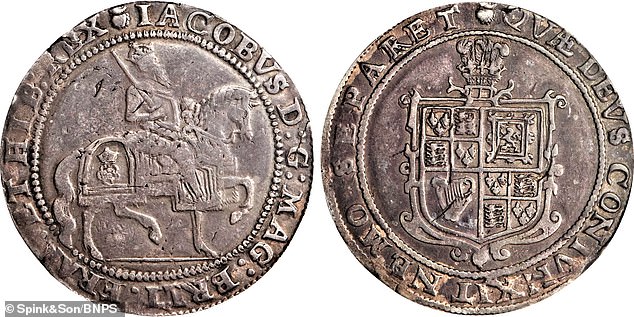 A 1603 James I crown from the year he ascended to the English throne, made from Welsh silver, fetched £5,750 (pictured)