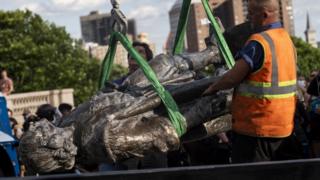 Statues of Confederate leaders and the explorer Christopher Columbus have been torn down in the US, as pressure grows on authorities to remove monuments connected to slavery and colonialism.

A statue of Confederate President Jefferson Davis was toppled in Richmond, Virginia, on Wednesday night.

Elsewhere in the city, a statue of Columbus was pulled down, set alight and thrown into a lake a day earlier.

Anti-racism protests have re-ignited debates over US historical monuments.

Memorials to the Confederacy, a group of southern states that fought to keep black people as slaves in the American Civil War of 1861-65, have been among those targeted by demonstrators taking to the streets after the death of George Floyd in Minneapolis police custody.

Statues of Columbus in Boston, Massachusetts and in Miami, Florida were also vandalised. The one in Boston, which stands on a plinth at the heart of town, was beheaded.

Many people in the US celebrate the memory of Columbus, who in school textbooks is credited with discovering “the New World”, the Americas, in the 15th Century.

But Native American activists have long objected to honouring Columbus, saying that his expeditions to the Americas led to the colonisation and genocide of their ancestors.

The death of Mr Floyd, whose neck was kneeled on by a police officer for nearly nine minutes, has spurred a global protests against police brutality and racial inequalities, led by the Black Lives Matter movement.

Many cities and organisations have taken steps to remove Confederate symbols, which have long stirred controversy because of their association with racism.

Last week, for example, Virginia’s Governor Ralph Northam announced that a statue of Confederate General Robert E Lee would be removed from Richmond.

However a judge has since granted a temporary injunction stopping the removal of the statue.

He tweeted: “The United States of America trained and deployed our HEROES on these Hallowed Grounds, and won two World Wars. Therefore, my Administration will not even consider the renaming of these Magnificent and Fabled Military Installations.”

A @7News photographer was the first one to discover the head had been knocked off the Christopher Columbus statue along the waterfront in the North End. Boston Police were on scene investigating later overnight. pic.twitter.com/YIIHUiPua9

In a pointed exchange on Twitter, Mr Trump demanded that the mayor of Seattle “take back your city” from protesters, whom he called anarchists and domestic terrorists.

In a tweet of her own, Mayor Durkan responded that Mr Trump could make everyone safe by going back to his White House bunker.

Radical Left Governor @JayInslee and the Mayor of Seattle are being taunted and played at a level that our great Country has never seen before. Take back your city NOW. If you don’t do it, I will. This is not a game. These ugly Anarchists must be stooped IMMEDIATELY. MOVE FAST!

A similar backlash against statues of slave owners has been seen in the UK since Mr Floyd’s death.

Black Lives Matter demonstrators tore down a statue of slave trader Edward Colston and threw it into a harbour during a protest in the city of Bristol on Sunday. 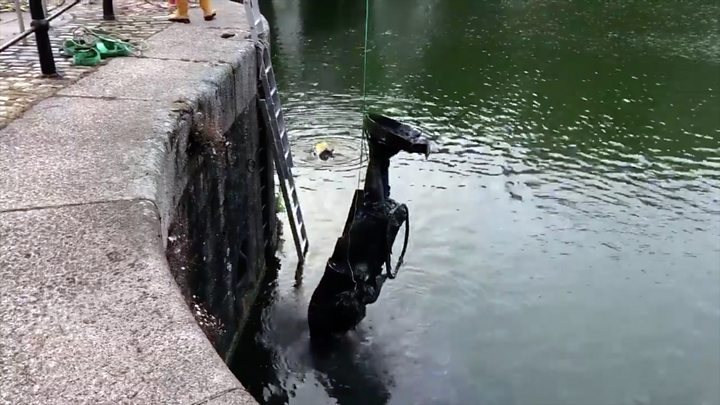 On Thursday, Bristol City Council said it had retrieved the statue, which will be taken to a secure location before becoming a museum exhibit.

Earlier this week, a statue of noted slaveholder Robert Milligan was removed from outside the Museum of London Docklands.

And, during a Black Lives Matter protest in London last weekend, a statue of Sir Winston Churchill in Parliament Square was sprayed with graffiti.