Internet users have a mind of their own — a fact the social media team at BARK knows all too well.

The company, which owns BarkBox, a subscription-based service delivering a “monthly surprise of dog toys, treats, and goodies,” caused quite a stir online last week after releasing a special holiday promotion, including an apparently head-turning item.

The “Thankstuffing BarkBox,” which contains a slew of Thanksgiving dinner staples in the form of plush, chewable dog toys, features items like the “Ducken Stuffed Turkey,” the “Boatload of Gravy” and, most notably, the “Big Honkin’ Pigs in a Blanket.”

That last item — meant to depict a classic cocktail wiener embellished with a pig snout on one end and a pig butt on the other — was featured on BarkBox’s Facebook page on Nov. 6, which is where a few eagle-eyed netizens noticed the backside of the toy bears a shocking resemblance to an adult-entertainment item called a “Fleshlight” (warning: Google at your own risk). 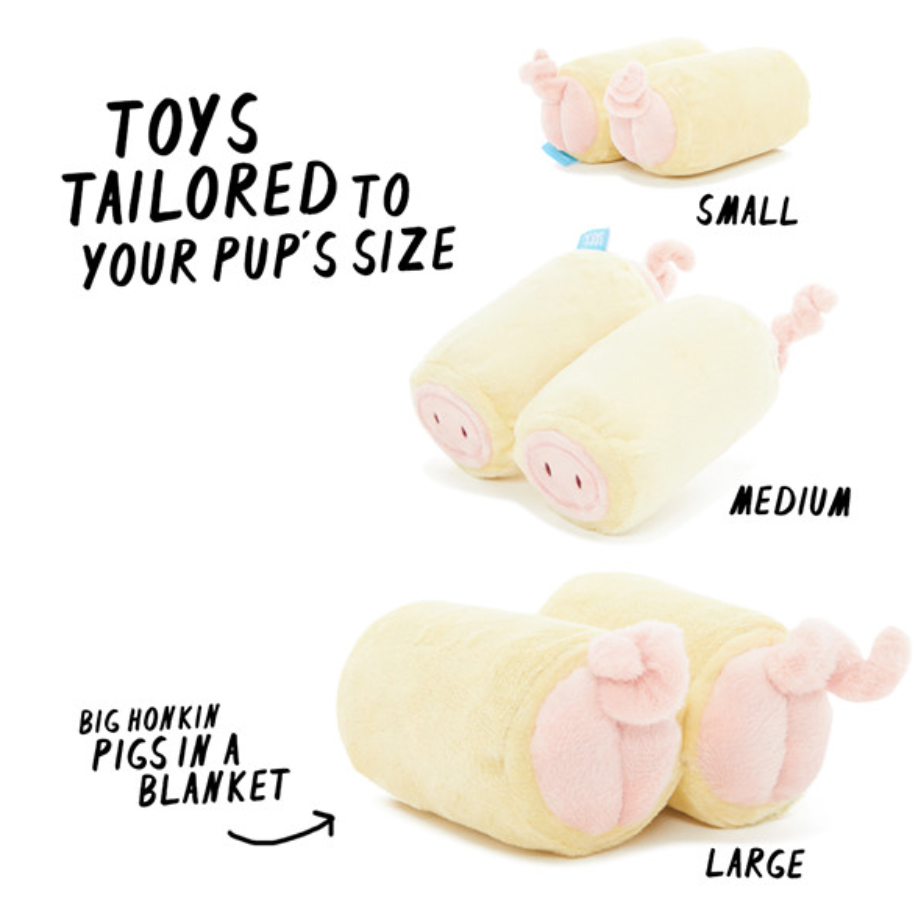 Alexis Nelson, Head of Social Media Marketing at BarkBox, told In The Know she was first alerted to the likeness by a Twitter user, who tweeted the company a screenshot of the item, along with the question, “What’s going on, fam?”

Nelson said she had originally prepared herself for a different type of reaction to the pig toy, which she had seen in person before the promotion went live.

“I mean, the butts are super funny, so, of course, I was expecting people to talk about them,” she said, adding she anticipated that any negative reactions would come from animal rights activists unhappy with the depiction of an entire pig, rolled up and cooked in one piece.

Nelson then began sifting through comments on the Facebook post before realizing the uproar had nothing to do with animal cruelty whatsoever.

“I was hunkering down, ready to say, ‘I’m also a vegan, it’s okay!'” Nelson recalled. “And… that wasn’t what people meant at all.”

After laughing to the point of tears at the user feedback, Nelson said she was spurred to “lean in and join in the fun.” She and her teammates have since delivered dozens of iconic responses to lewd and confused commenters on the original post, which has racked up more than 17,000 comments.

Stacie Grissom, Head of Content at BARK, told In The Know she was thrilled to see a potential scandal instead turned into something “warm and lovely.”

“It just communicates — we’re here and trying to have fun and trying to make your dog happy,” she said of the company’s core mission.

Grissom, who has been at BARK for 7 years, added that the company tends to be playful and a bit naughty with its toy designs, often utilizing “ridiculous little jokes” as inspiration for new items.

“We’ve had two red rocket toys,” she explained, referencing the slang term often used to refer to a dog’s erection. “This would have been a joke we made, but truly, it was an accident.”

After the product went viral, Grissom said she located the person who designed the “Big Honkin’ Pigs in a Blanket” in an attempt to get to the bottom of the matter. Shockingly, the toy’s creator said she was just as in the dark as the rest of the team.

“I actually found the designer who created the toy and she goes, “I know what a Fleshlight is, but I was not thinking about that when I designed this toy,'” Grissom laughed. “We had no idea.”

“I held the toy in my hands three weeks ago and was just like, ‘Yep. Two sets of pig butts,'” Nelson added. “Completely over my head.”

Regardless of any resemblance between the pig toy may bear and an X-rated gadget, internet users simply cannot seem to get enough of it.

“We sold out of the toys in two hours,” Grissom said, adding the company had to drain their Black Friday backstock of the “Big Honkin’ Pigs in a Blanket” in order to keep up with current demand. (Currently, the item is not for sale individually — the only way to ensure you receive one is to order a Double Deluxe Thankstuffing-themed BarkBox).

The experienced social marketer even called the viral ad the best organic social campaign she’d seen throughout her years in the industry.

So, when can fans expect to see the “Big Honkin’ Pigs in a Blanket” fully back in stock?

Although the toy was meant to be a holiday item, Grissom and Nelson say they hope that like some of the company’s cult-favorite dog toys — such as Consuela the Cactus, which previously went viral on Reddit— the Thanksgiving specialty will be available long after the holidays are over.

Judging from the comments on BarkBox’s Facebook page, it seems some of their fans are… excited by that prospect.