A federal government scheme set up to ensure aged care employees did not work in more than one facility after Victoria’s deadly second coronavirus wave has paid grants to just 33 aged care operators.

The funding was established after last year’s aged care COVID-19 outbreak, in which 655 people died. Much of the spread in nursing homes was caused by low-paid casual employees working second or third jobs to supplement their wages. 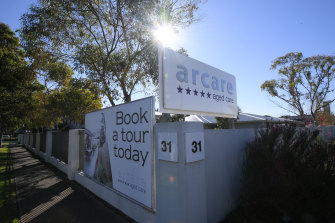 The Arcare aged care home in Maidstone, where a second resident has tested positive.Credit:Eddie Jim

But federal data obtained by The Age shows only 33 grants have been paid to aged care companies that operate about 90 of the state’s 600 Commonwealth-regulated homes. The total amount paid was $12.5 million, a figure described by one prominent sector expert as “very, very small”.

The news comes as a second resident of the Arcare aged care facility in Maidstone tested positive to coronavirus on Wednesday, bringing to five the number of cases linked to aged care in Victoria’s latest outbreak.

The 89-year-old is a close contact of another resident who tested positive along with two workers on the weekend, sending the home into lockdown. One of the employees also worked at the BlueCross Western Gardens centre in Sunshine. A relative of one of the workers has also been infected.

The resident is currently asymptomatic. Both had been fully vaccinated with the Pfizer vaccine.

The grants were established by the Morrison government last July as COVID-19 spiralled out of control in Victorian aged care homes, ultimately infecting 2000 residents. The funding was lifted when the single-facility request was removed but reinstated during outbreaks in January and February, and again last week.

Providers were asked to apply for the grant on behalf of employees but the Health Workers Union, which represents aged care staff, said many of its members had unsuccessfully pleaded with their employers to submit applications.

In a letter to Aged Care Minister Richard Colbeck on Wednesday, the union demanded the process be changed so aged care workers could apply for the funding themselves.

”Whether it be through complacency, lack of incentive, or sheer ambivalence is unclear – employers are simply not making these applications on behalf of their employees,” union secretary Diana Asmar wrote.

Ms Asmar said Commonwealth bureaucrats last year told an aged care taskforce that grant applications were trickling in at a rate of about one per week. She estimated a “minuscule” proportion of providers would have applied for the grant since it was restarted last week.

“Your immediate action is vitally important to help minimise the risk of cross-contamination across private residential aged care facilities by aged care workers during this fourth Victorian lockdown,” she wrote to Mr Colbeck.

Monash University professor and GP Joseph Ibrahim said the $12.5 million given in grants to date was small in relation to the total wages bill for aged care workers.

“[It] sounds big but once you start dividing it across services, it’s very, very small,” he said. 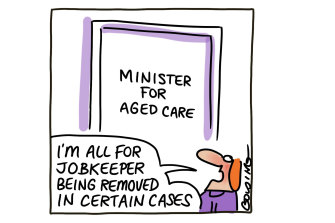 Professor Ibrahim, the head of Monash’s Health Law and Ageing Research Unit, said it was possible the funding would have helped if it was targeted “in the hottest of hotspots”.

“The message it sent to everyone was quite profound – it may have encouraged people not to work across multiple sites. It would have left people in no doubt that you should not be working across multiple homes,” he said.

The union estimates a far greater proportion of the aged care workforce has second jobs. Only about 35 per cent are full-time.

Both Ms Asmar and Professor Ibrahim raised concerns about whether the grant funding was being passed onto employees, with Ms Asmar noting there had been no auditing of the scheme.

The federal Health Department said on Wednesday that new, more virulent COVID-19 variants may lower the threshold for a hotspot to be declared and the single-site payment to be reinstated for future outbreaks. But Mr Colbeck said there was no plan to make the payment permanent and said it would be reviewed once the outbreak in Melbourne was contained.

With Rachel Clun and Melissa Cunningham

Stay across the most crucial developments related to the pandemic with the Coronavirus Update. Sign up to receive the weekly newsletter.