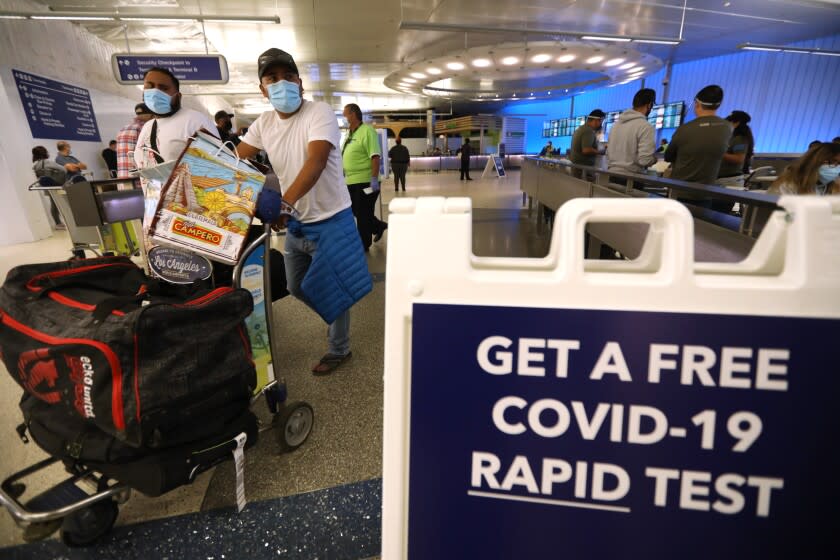 That tally follows 3,730 new cases reported in L.A. County on Saturday — the highest single-day total in months — sparking concerns of another winter surge stoked by holiday festivities. Meanwhile, COVID-19 hospitalizations are on the rise in California as the Omicron variant spreads.

There were 3,557 COVID-19 patients in the state’s hospitals as of Saturday, an increase of roughly 13% from two weeks before, according to The Times’ hospitalization tracker. On Sunday, L.A. County reported that 742 people were hospitalized with COVID-19, and nine people died from the virus.

Businesses in L.A. County are reporting notable outbreaks among workers, including 132 staff members who recently tested positive at SpaceX corporate headquarters in Hawthorne; 85 workers at the FedEx shipping center near Los Angeles International Airport; and 28 staff at Gjelina, a popular Venice restaurant.

California recorded 49 cases of the Omicron variant as of Wednesday, with 38 of those in L.A. County. That's much lower than the 184,700 identified cases of the Delta variant, which remains the state's dominant strain.

Health officials expect the number of Omicron cases to rise, as the variant is believed to be more contagious than Delta and better at evading immunity generated by vaccines or previous infections. Experts say vaccines still offer protection against severe illness and death caused by Omicron.

Although there are early indications that Omicron might cause less severe illness than other variants, hospitals could be overwhelmed if enough people are infected, health officials say. That comes as the system already faces multiple challenges, including significant staffing shortages and increased demand for other healthcare services such as flu treatment and procedures that were put on hold earlier in the pandemic.

Orange and Riverside counties on Friday reported their first documented cases of the Omicron variant. In Orange County, the variant was found to have infected a fully vaccinated man who had recently traveled domestically outside California and experienced mild illness, public health authorities said.

In Riverside County, the variant infected a 41-year-old fully vaccinated man who was tested in L.A. County on Dec. 8, public health officials said.

Outbreaks have forced the postponement of sporting events, including the Los Angeles Rams home game against the Seattle Seahawks scheduled for Sunday, which was moved to Tuesday, and the Anaheim Ducks road game against the Calgary Flames slated for Tuesday, which has not yet been rescheduled.

Nationally, the U.S. Centers for Disease Control and Prevention forecasts that there could be more than 1 million new coronavirus cases recorded the week of Christmas. By contrast, around Halloween, there were 500,000 new weekly cases.