A top-ranked sumo wrestler has tested positive for the coronavirus, officials in Japan have said.

The Japan Sumo Association (JSA) announced on Tuesday that the fighter, who goes by the name of Hakuho, had a PCR test after noticing problems with his sense of smell.

The Mongolian-born star, 35, has won a record 44 top-division titles and is the longest-serving yokozuna (top-ranked sumo wrestler) of all time. 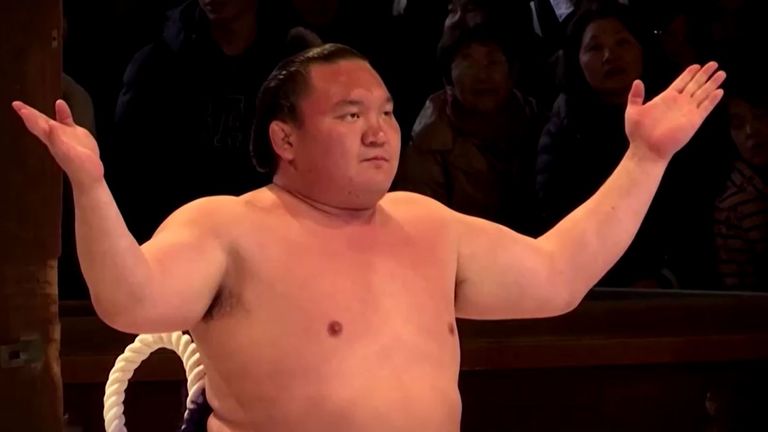 He has been preparing for the New Year Grand Sumo Tournament, which is scheduled to start in Tokyo on Sunday.

There was no immediate report on Hakuho’s exact condition and the organisers have not said whether the tournament will be postponed.

Kimura Motoki, a sumo referee, or gyoji, also tested positive on Monday after complaining of a fever and cough.

Members of Hakuho’s Minato sumo stable will have PCR tests as a precaution.

Hakuho, rated as one of the best the traditional Japanese sport has ever seen, is the first of the top-ranked sumo wrestlers in Japan to test positive for COVID-19.

Wrestling runs in his family. His late father was a silver medallist in wrestling for Mongolia in the 1968 Olympics and also competed in the 1964 Tokyo Olympics.

Hakuho’s positive test follows Friday’s announcement of a cluster of infections a different stable, including eight lower-division trainees and a hairdresser.

Back in May, 28-year-old sumo wrestler Shobushi died due to multiple organ failure related to the coronavirus after he became infected.

Japan, with a population of 125 million, has managed the coronavirus pandemic relatively well, with about 3,500 deaths attributed to COVID-19 from nearly 250,000 cases.

But new cases have been surging over the last several weeks and Prime Minister Yoshihide Suga has been asked to impose a “state of emergency” for Tokyo and three neighbouring prefectures.