CPI inflation rate drops to 0.4% in February with clothes and cars getting cheaper after renewed lockdown – easing fears over rising prices

The inflation rate dropped to 0.4 per cent in February amid the renewed lockdown, figures showed today.

The headline CPI measure fell from 0.7 per cent as the costs of clothing and second-hand cars dipped.

The latest data were well below the expectations of experts, and could ease fears about prices running out of control.

There have been concerns about the economy overheating as restrictions are eased after the government’s huge spending spree to keep the economy afloat during the pandemic. 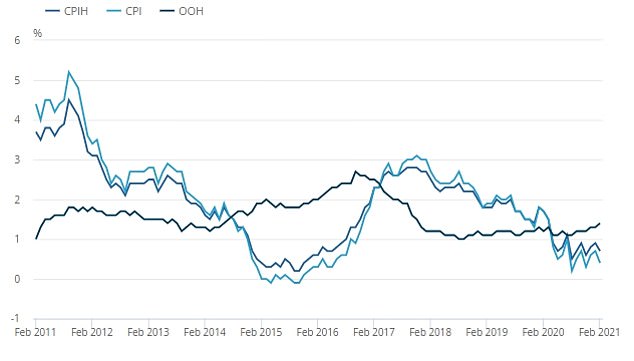 The headline CPI measure fell from 0.7 per cent as the costs of clothing and second-hand cars dipped

‘A fall in clothing prices helped to ease inflation in February, traditionally a month where we would see these prices rise, but the impact of the pandemic has disrupted standard seasonal patterns.

‘Elsewhere there were falls in the price of second-hand cars.

‘However, prices at the pump rose this month, compared with a fall this time last year.’