The growing perception that Britain has lost control of its borders is not just politically toxic for the Government. It actively fuels the problem.

Pictures of migrants successfully crossing the Channel, crowded into unseaworthy small boats or refrigerated lorries, are a magnet for others to attempt the treacherous journey.

Nearly 37,000 entered the UK illegally last year (the ones caught), a figure certain to be surpassed in 2022 without action. With spring arriving and calm seas, they are turning up at a rate of hundreds a day.

Let’s be unambiguously clear. Those arriving clandestinely on our shores did not flee war and terror in France. Many are economic migrants seeking a better life, not the genuinely oppressed. 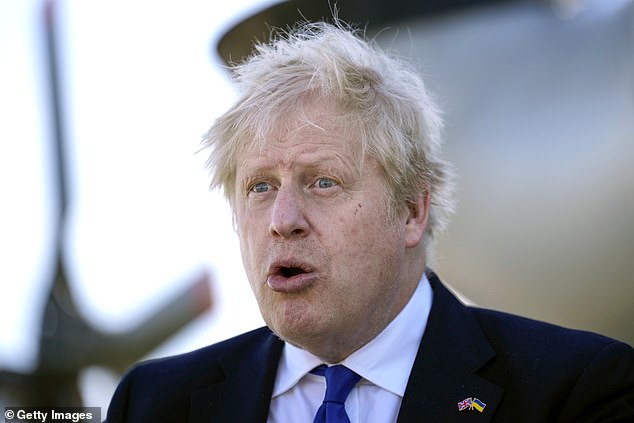 And the truth is, the public are fed up with this state of affairs. It is a security risk, a huge financial burden for taxpayers, a strain on public services, and a kick in the teeth for migrants trying to come here legally.

So the Daily Mail welcomes the Government’s bold and imaginative proposal to finally tackle the crisis after years of hand-wringing and dithering.

Migrants without a bona fide asylum claim will get a one-way ticket to Rwanda. There, they can seek sanctuary – or return home. This is the best way to save lives and beat the evil smuggling gangs. Who will pay extortionate sums to criminals if they may end up 4,000 miles away in Africa?

Of course, 1,001 what-abouts, what-ifs and other questions need answering. Perhaps the scheme, which Boris Johnson admits is no instant ‘magic bullet’, will flop. But it offers at least a sliver of deterrence to illegal migrants.

Predictably, the Left have had a fit of the vapours, branding the Tories ‘cruel’ and ‘evil’. But how compassionate is it to let refugees hand over their worldly belongings to traffickers so they risk their lives – or die – in a leaky dinghy or suffocating truck?

Mr Johnson deserves plaudits for taking on the army of activist lawyers who thwart deportations with a merry-go-round of bogus human rights appeals.

And he has ruthlessly exposed Labour’s policy vacuum on asylum.

Sir Keir Starmer bleats the plan is ‘unworkable’. But what is his alternative? Answer: He doesn’t have one.

With thinly veiled contempt for the public, his party invariably wants open borders. Opposing any kind of immigration control is almost a Pavlovian response.

Offshoring illegal migrants may send a shudder through the fashionable salons of north London, but among ordinary people it is a winner. They are aghast at the illicit armadas arriving daily at Dover – especially after the Brexit promise to take back control of our borders.

If the Prime Minister pursues this policy energetically, and refuses to cave in to manipulative claims by campaigners that it is racist to turn away migrants, he will be handsomely rewarded by voters.