A level crossing in Cambridgeshire has been revealed as the worst in the UK for barrier-hopping and other reckless trespassing incidents.

Shelford level crossing recorded 11 ‘incursions’ in 2020, with one man being knocked to the ground by a head blow from a descending barrier.

Other incidents at Shelford saw devil-may-care pedestrians leapfrog the closed barriers, in some cases to get onto the train platform – without paying – and in others to cross more quickly. 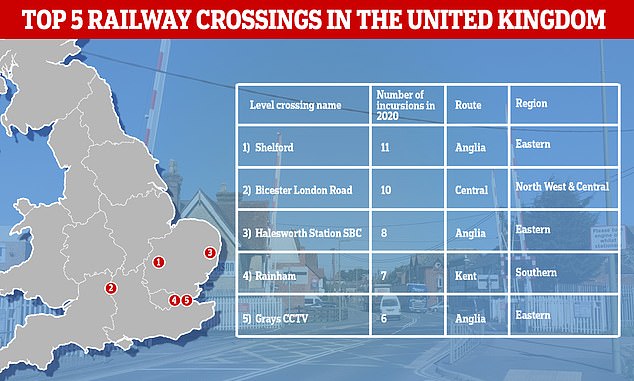 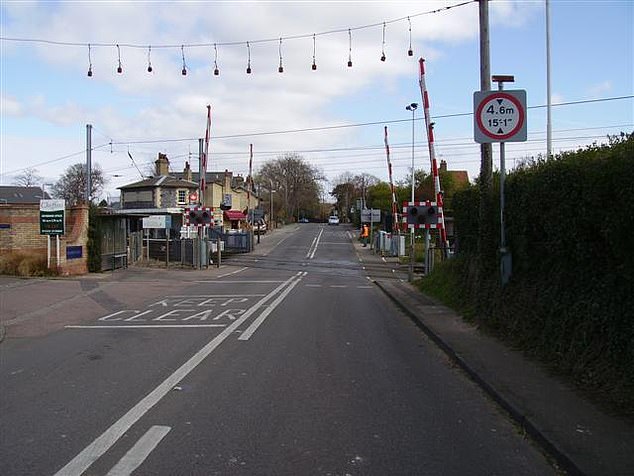 Shelford level crossing, in Cambridgeshire, topped the list of railway crossings in the UK with the most ‘incursions’. Trains rumble down the line at an average 90 miles per hour 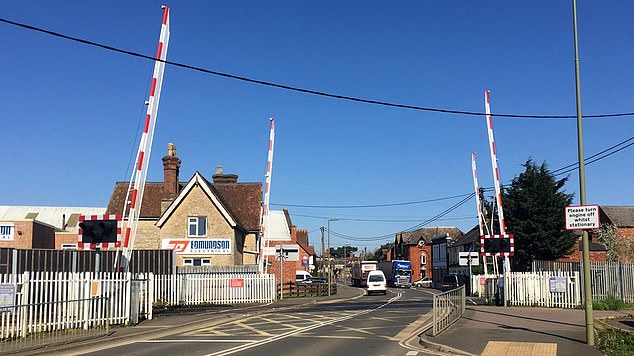 Bicester London Road, the second-worst railway crossing for trespassing, sees 85 trains pass through every day at an average speed of 100 miles per hour

Bicester London Road came in second place for railway crossings with the most incursions, according to Network Rail’s response to a MailOnline Freedom of Information (FoI) request.

One cyclist found himself trapped within the barriers at Bicester London Road in January 2020, narrowly escaping an oncoming train when his presence on the track was flagged up to the conductor by an onlooker.

The trapped cyclist had got off his bike and ‘tucked [himself] tightly into the corner of the barrier’, according to the incident report, meaning the railway attendant failed to notice him.

Another incident on Bicester London Road railway crossing, in May 2020, saw a female stand in the middle of the crossing with her arms out as the barriers came down.

She then climbed over the barriers, before tempting fate a second time, climbing back over and onto the tracks – this time with a male.

The two then disappeared out of the CCTV’s range, heading towards Bicester Village Station.

The male and female were eventually escorted off the track by police, according to the report released by Network Rail in response to an FoI request.

Shelford level crossing, in Cambridgeshire, is crossed every year by 4401 vehicles as well as 871 pedestrians or cyclists, while trains thunder through periodically at an average of 90 miles per hour, according to statistics from ABC Railway Guide.

Risking death for a PHOTO: Outrage as shocking footage shows woman LYING DOWN on railway crossing to pose for a picture

Shocking CCTV shows a woman lying down on railway tracks to pose for photographs despite the dangers.

A woman in a bright jacket can be seen sprawled across the rails at a level crossing in East Sussex while her companion takes pictures.

Footage shows the pair hanging around by the tracks for around 50 seconds shortly before 11.30am on 18 January 2021.

The stunt at the crossing – where trains pass through at up to 70mph – has been branded ‘unthinkably stupid’ by police.

The incident at Tidemills level crossing near Seaford is the latest instance of dangerous behaviour on the railway which could have ended with fatal or life-changing consequences, according to Network Rail.

‘We cannot stress enough the danger that people are placing themselves in when they don’t use a crossing safely.

‘A split-second decision can have life-changing consequences, not only for those involved, but also for their family and friends, train drivers and railway workers.

‘Please, never take chances when using level crossings and if you have any concerns, always contact Network Rail or British Transport Police.’ 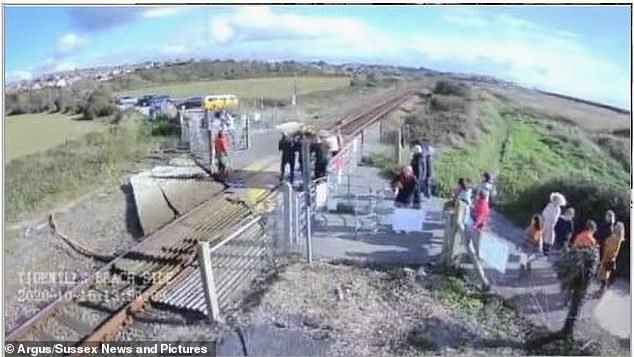 The picture of the procession (pictured) was released by Network Rail to remind people to be more careful at Tide Mills level crossing, near Bishopstone, between Seaford and Newhaven 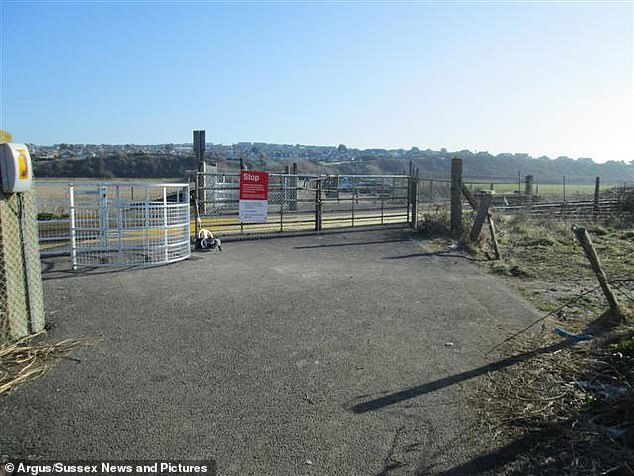 Other dangerous behaviour at Tidemills has included level crossing users filming the emergency stop of an oncoming train.

In another incident, cyclists narrowly missed a train, while large groups of pedestrians have experienced close calls by trying to beat approaching trains.

Cameras have also captured a funeral procession using the crossing.

‘Trains pass through this line at speeds of up to 70mph, so they could quite easily have been moments away from a catastrophic incident.

‘We’ve seen first-hand the consequences of this sort of recklessness and no photo opportunity is worth risking your life for.’