Days of the Raj in color: Stunning photos captured by pioneering US traveler give a rare insight into Indian life in 1895

Fascinating 125-year-old colour photos offer a rare insight to what life was like in India at the end of the 19th Century during the days of British colonial rule.

The British Raj – literally, ‘rule’ in Sanskrit and Hindustani – lasted from 1858 to 1947 and extended over almost all of modern-day India, Pakistan, and Bangladesh.

Remarkable images, taken in 1895, show a woman managing to haul two huge corrugated sheets on her back, native children sheltering their eyes from the fierce sun, and two buskers playing their stringed instruments as shoppers studiously swerve between them.

The striking photos were taken by pioneering American photographer William Henry Jackson as part of an extensive world tour for the World’s Transportation Commission, during which he travelled through Asia, Africa and Oceania.

The tour, set up by railroad magnate Joseph Gladding Pangborn, was initially organised to explore and examine different railroads systems throughout the world, but Jackson took the opportunity to capture the local people, architecture and landscape between 1894 and 1896.

His photos were featured in numerous publications and allowed ordinary people to experience life in countries they could only dream about.

As colour photography was in its infancy all of Jackson’s pictures were on black and white lantern slides. To make the lantern slides look more realistic, certain slides such as these were coloured by hand with dyes and paints.

At the time Jackson snapped his captivating pictures, India been under direct British rule for over three decades. Before 1858, when the crown took over, the country was under the influence of the East India Company.

Throughout its occupation India retained a strong sense of self – but it would still be over fifty years after Jackson’s visit that the country enjoyed independence. 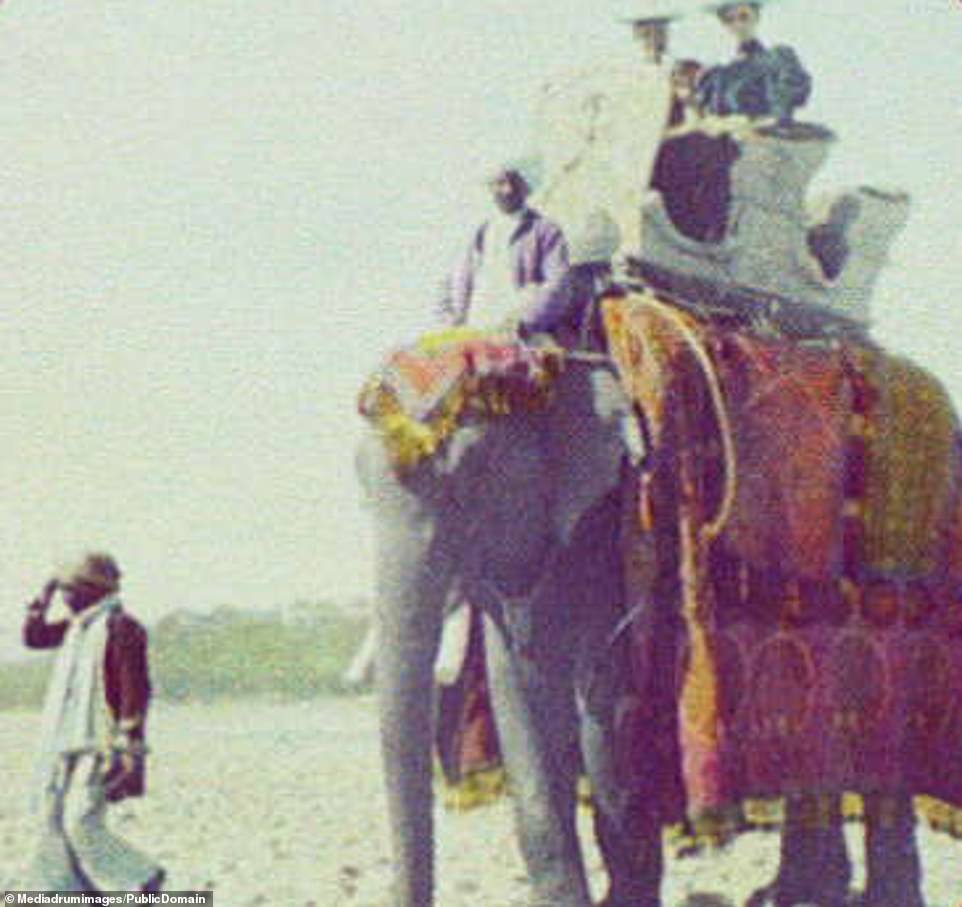 Two women enjoy a walk on the back of an ornately decorated elephant in India in 1895. The photograph is part of a collection taken by American photographer William Henry Jackson as part of an extensive world tour 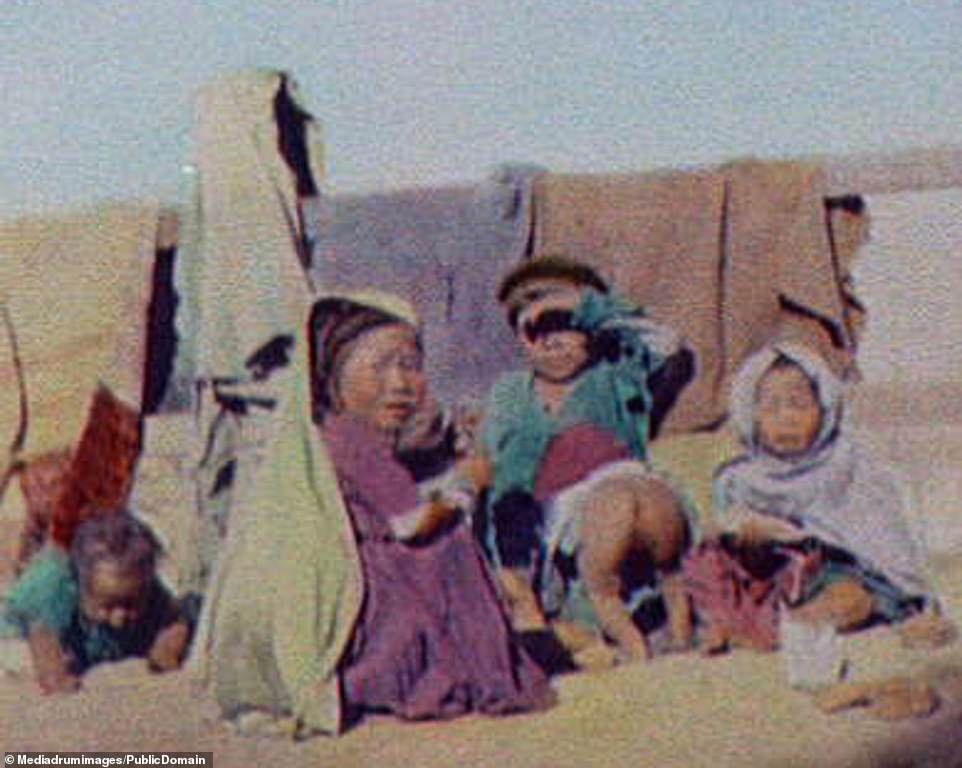 This image taken 125 years ago in India shows five small children sheltering from the blazing sun. The image was coloured by hand with dyes and paints 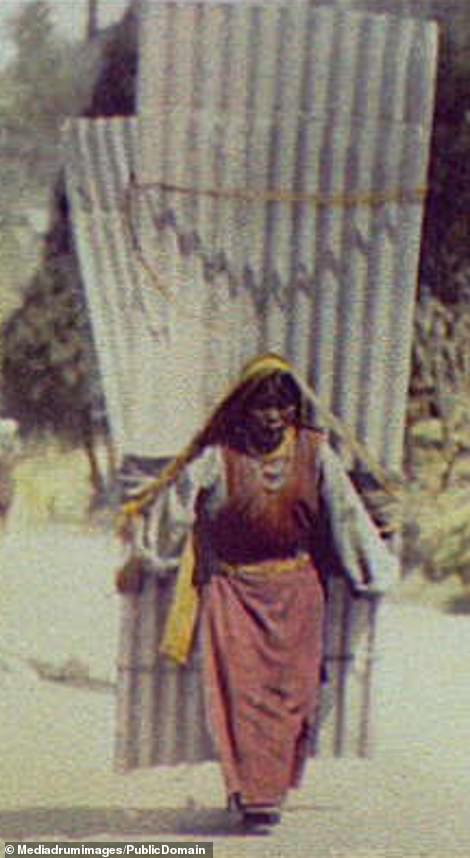 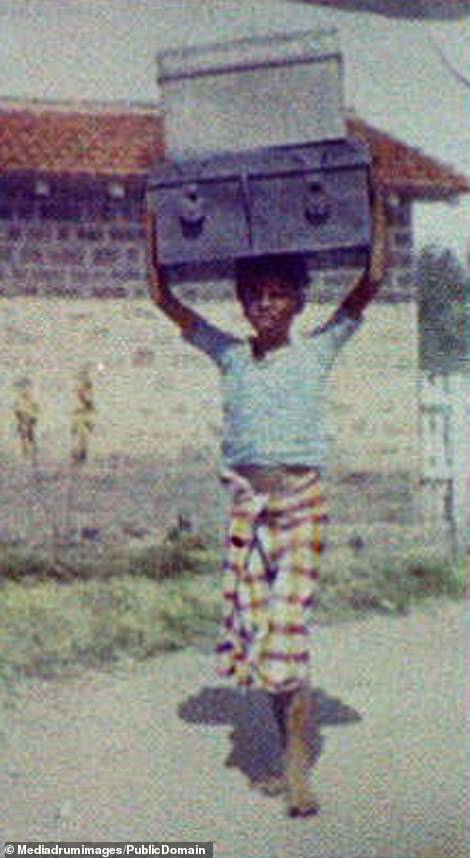 The images taken in 1895, show a woman managing to haul two huge corrugated sheets on her back (left) while a young boy carries two heavy trunks on his head (right) 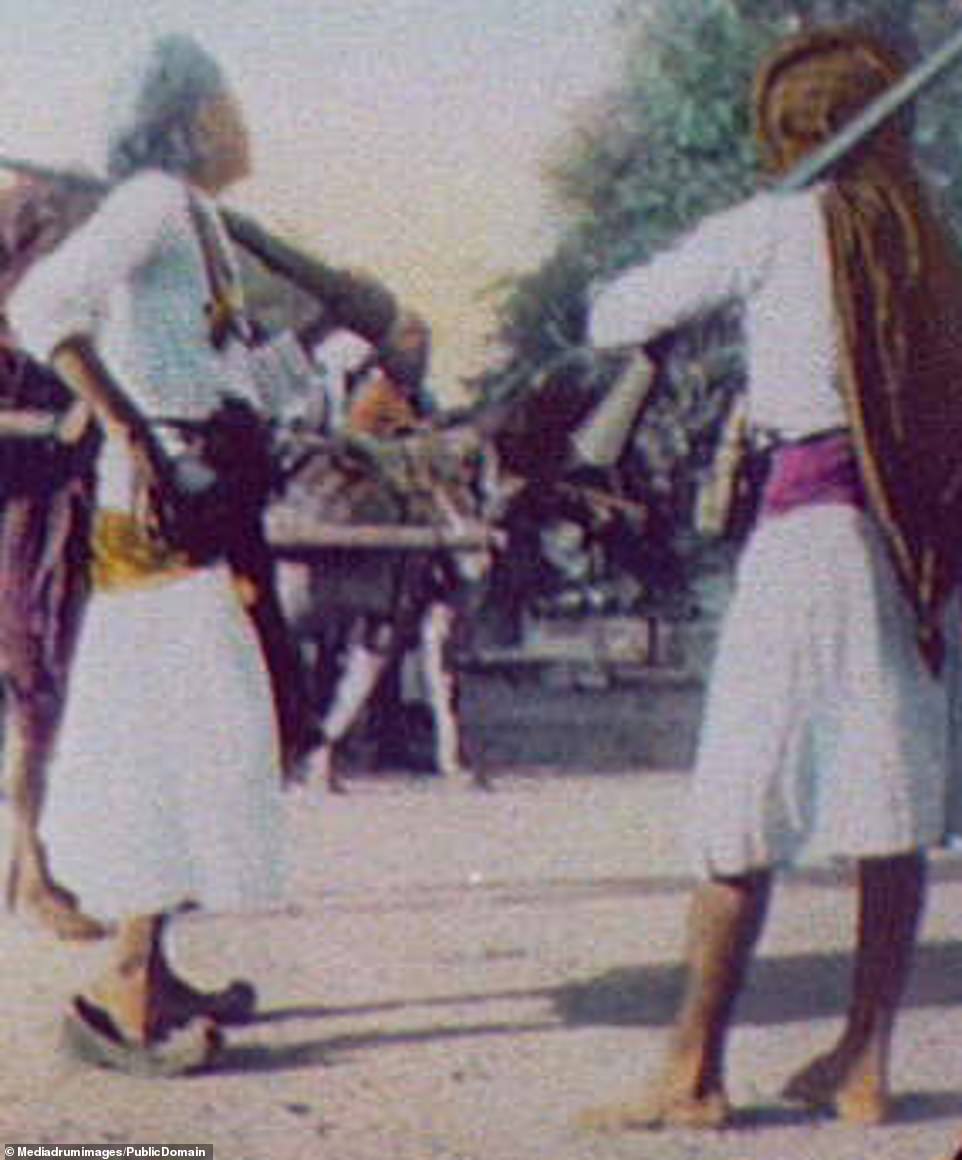 Two huntsmen bear arms in India in 1895. That same year Indian National Congress was founded as a secular political party –  a key turning point in Indian opposition to British rule 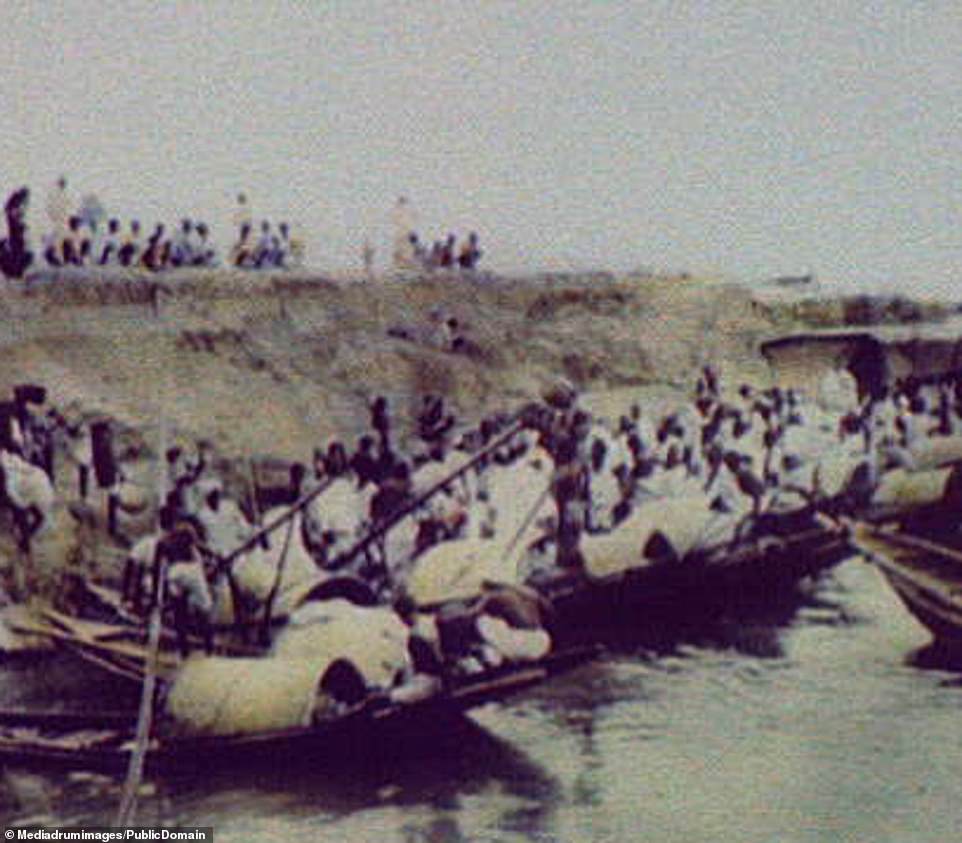 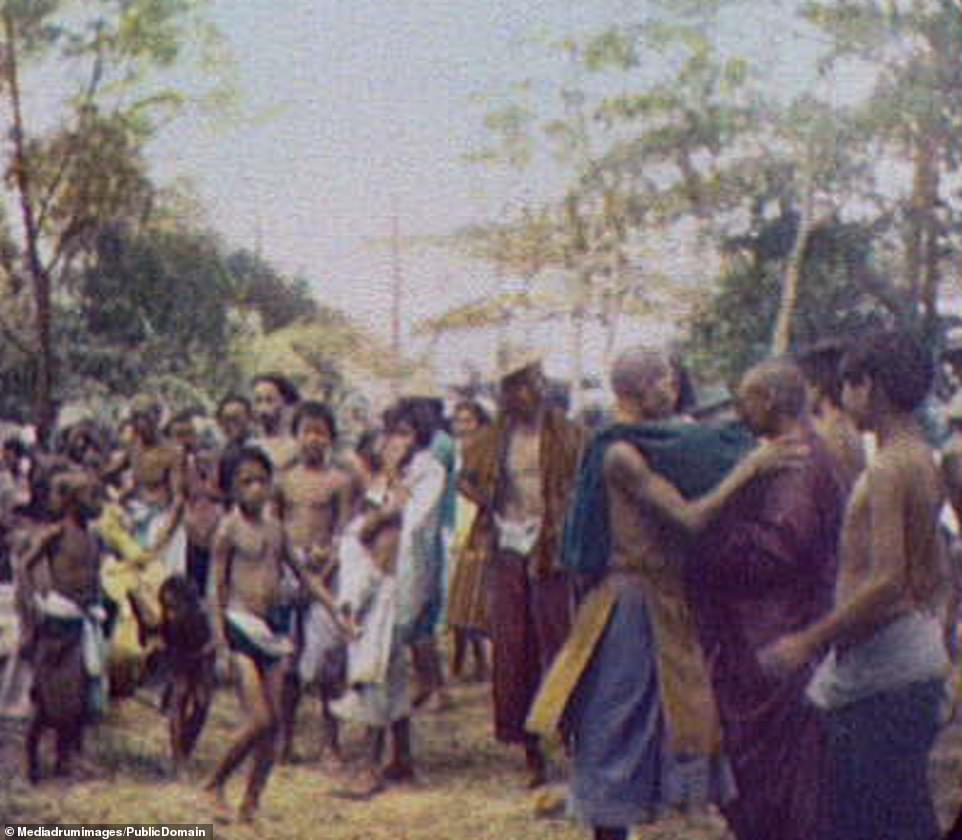 A bouncing crowd enjoying a festival in India. William Henry Jackson’s photographs were featured in numerous publications and showed ordinary people all over the world what life was like in India – an experience they could only dream about 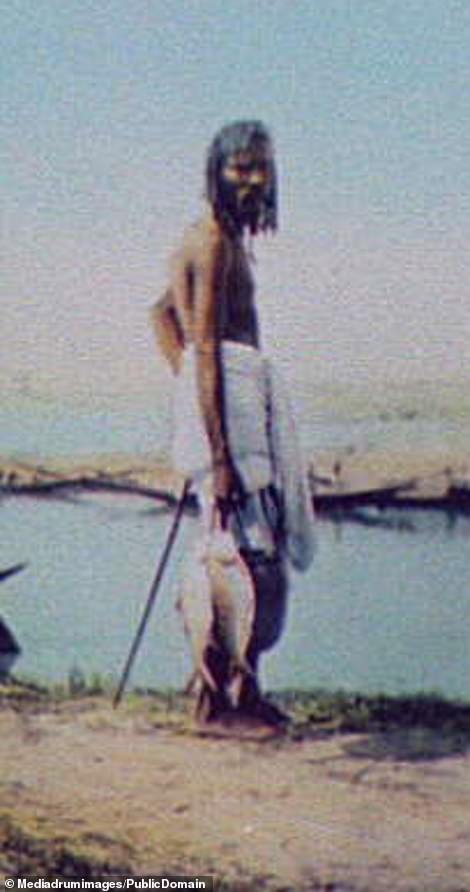 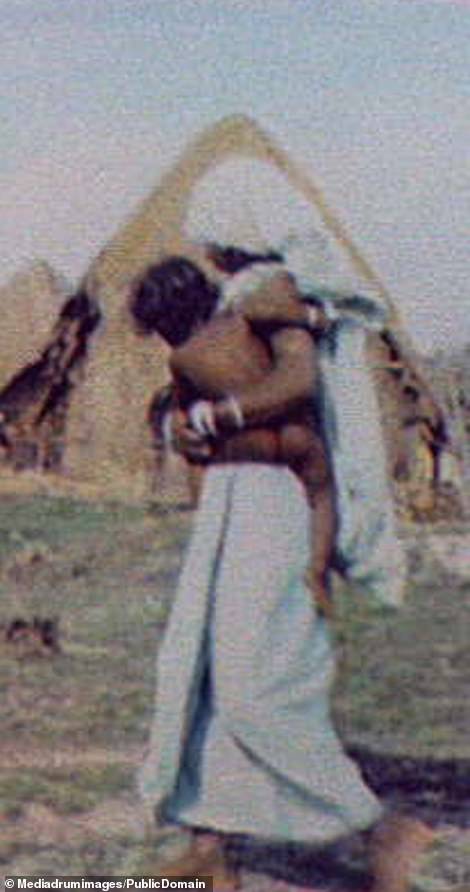 Jackson’s images captured daily life in 19th century India and feature a woman carrying a baby (right) and a fisherman clutching that day’s catch (left). It would still be over fifty years after Jackson’s visit that the country enjoyed independence 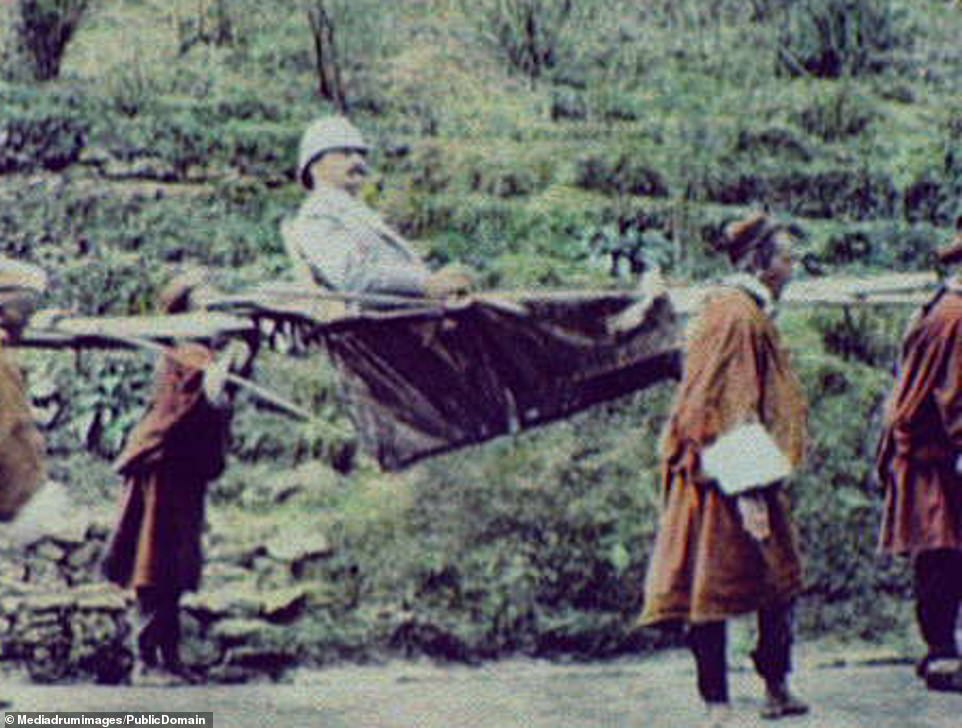 World Tour organiser Joseph Pangborn is carried around by four porters. The ambition of the trip was to research foreign railway systems but photographer Jackson took the opportunity to capture the daily lives of local people across the world while he was there 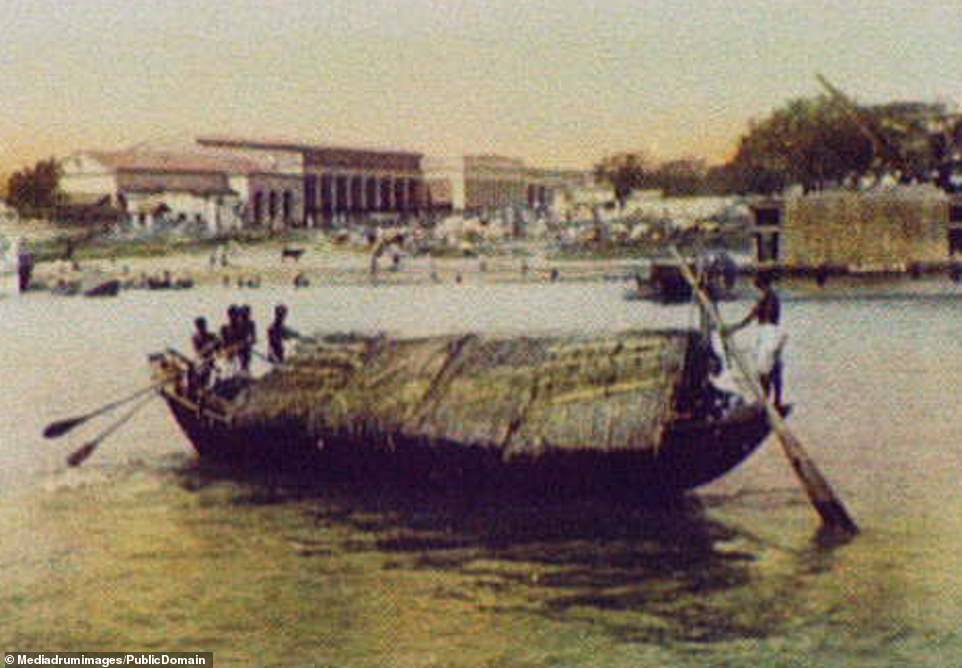 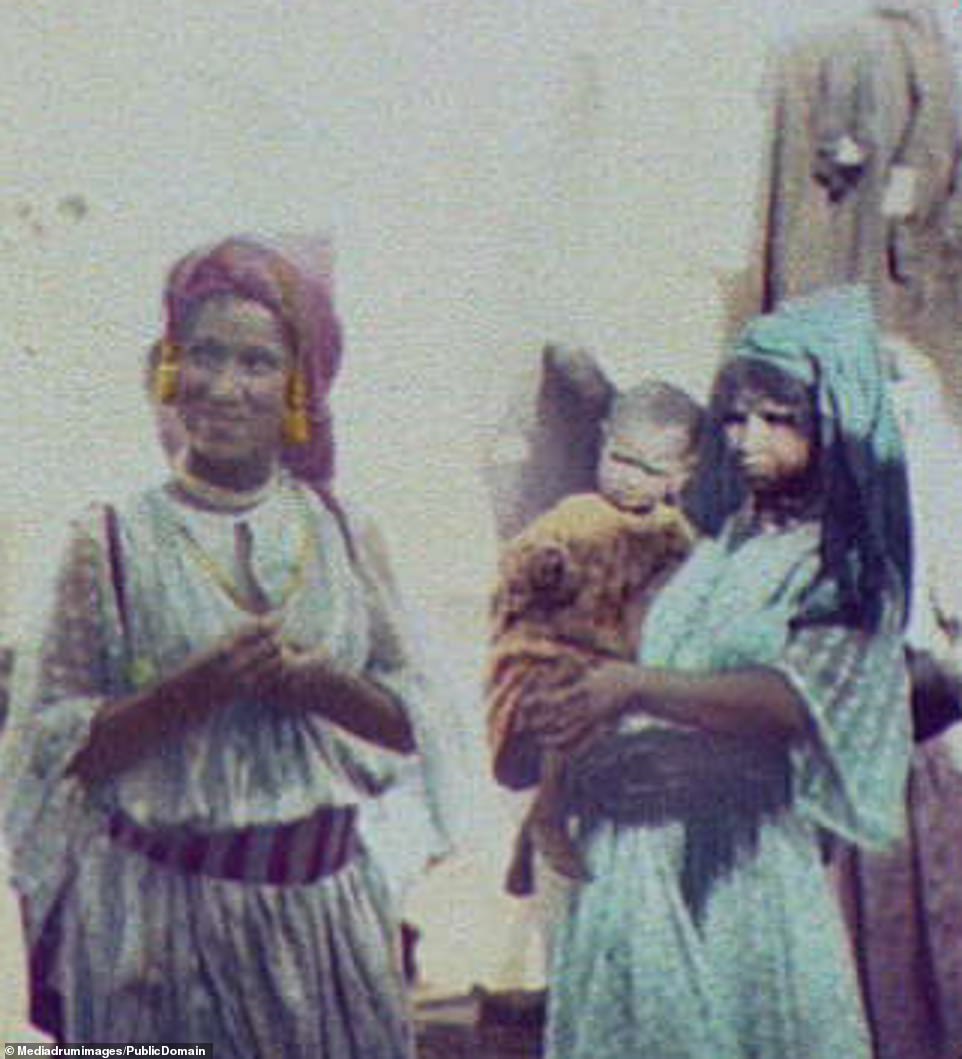 A smiling holds up her young son for a photograph. William Henry Jackson made sure he captured scenes like this featuring local people when he embarked on a world tour, initially to document different railroads systems throughout the world 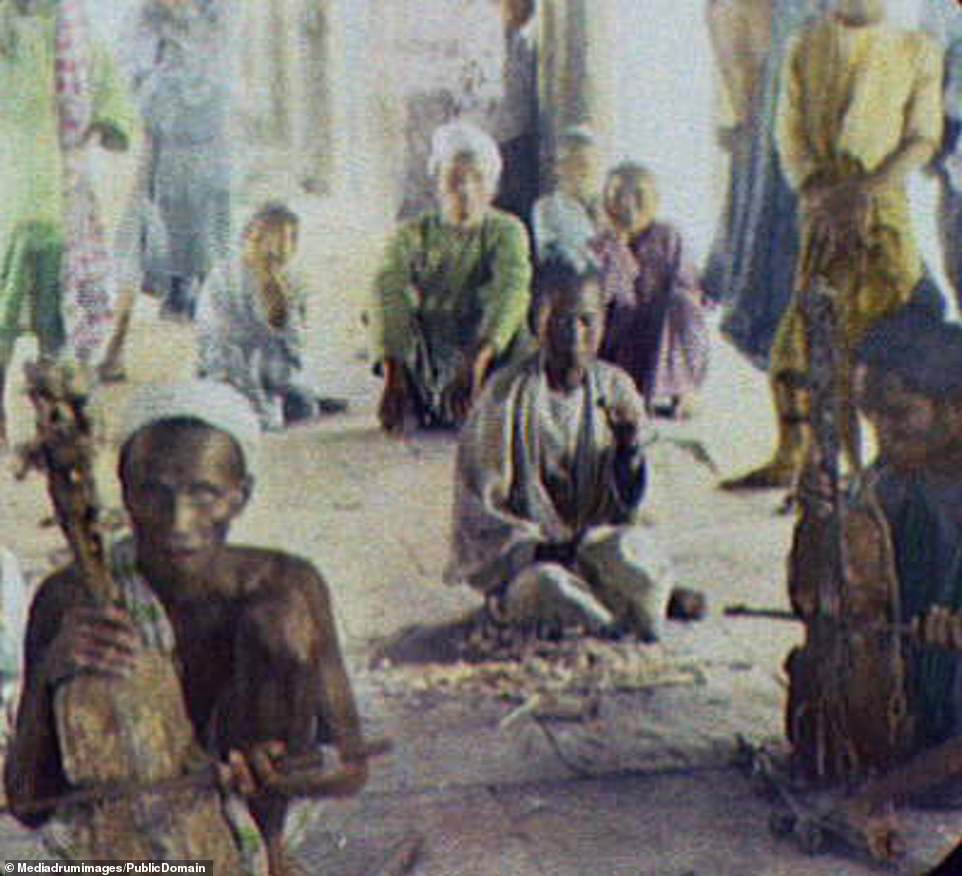 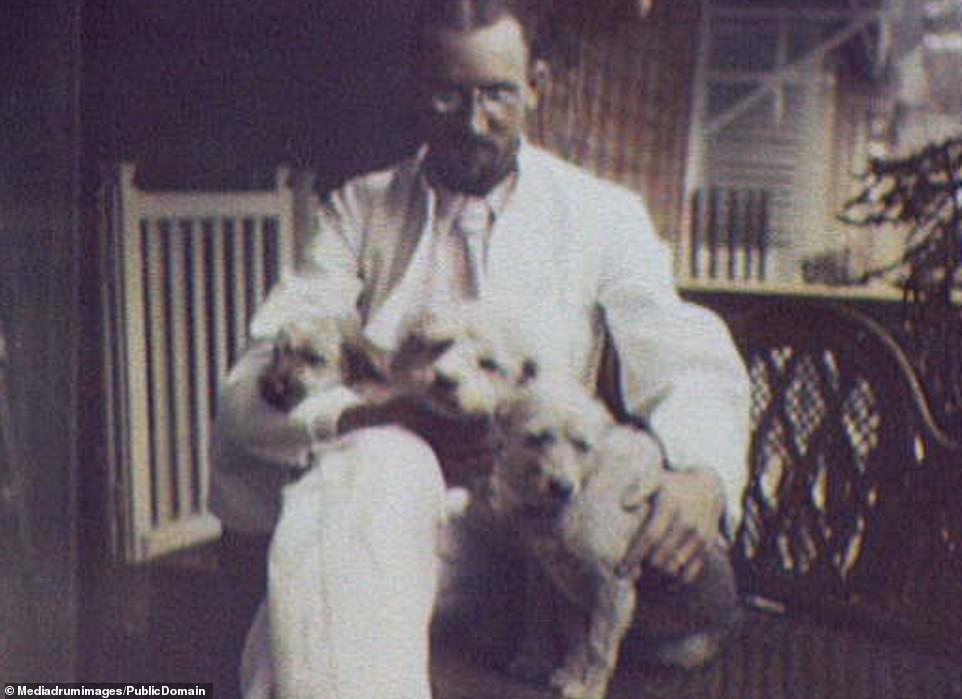 An Indian gentlemen holds three fluffy puppies. Like all of Jackson’s images this photograph would have been taken on black and white lantern slides and hand-coloured later on 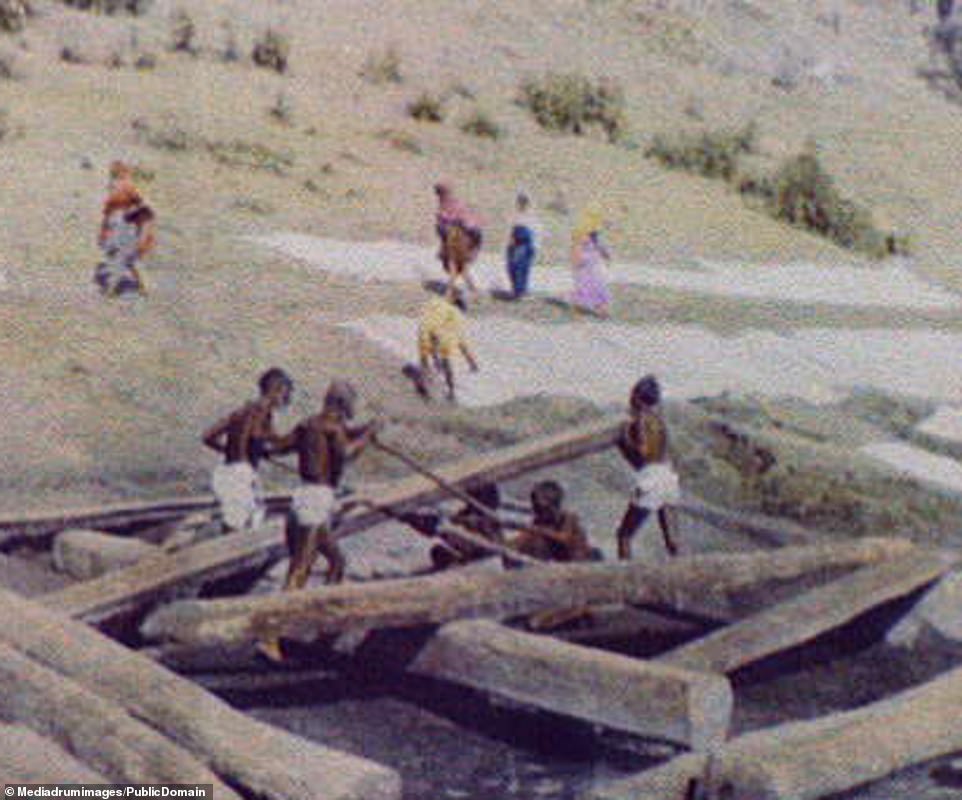 Indian men are pictured toiling away and sawing wood on the banks of the Ganges in 1895. At the time India was under direct British rule and had been for over three decades 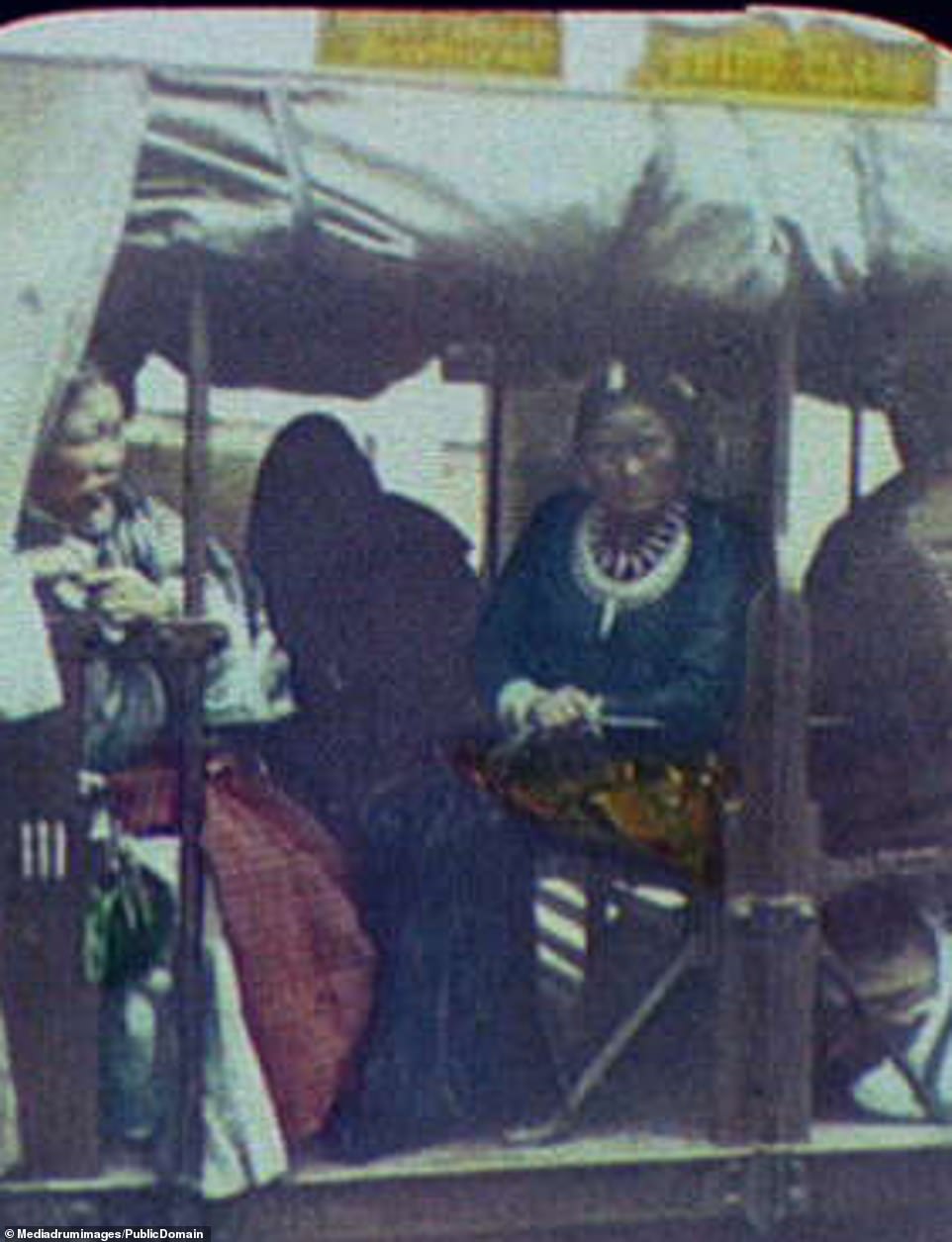 A group of women in traditional dress travel in 1895 train carriage in India. The signs above them reads ‘Native Females’ and ‘Third Class’ 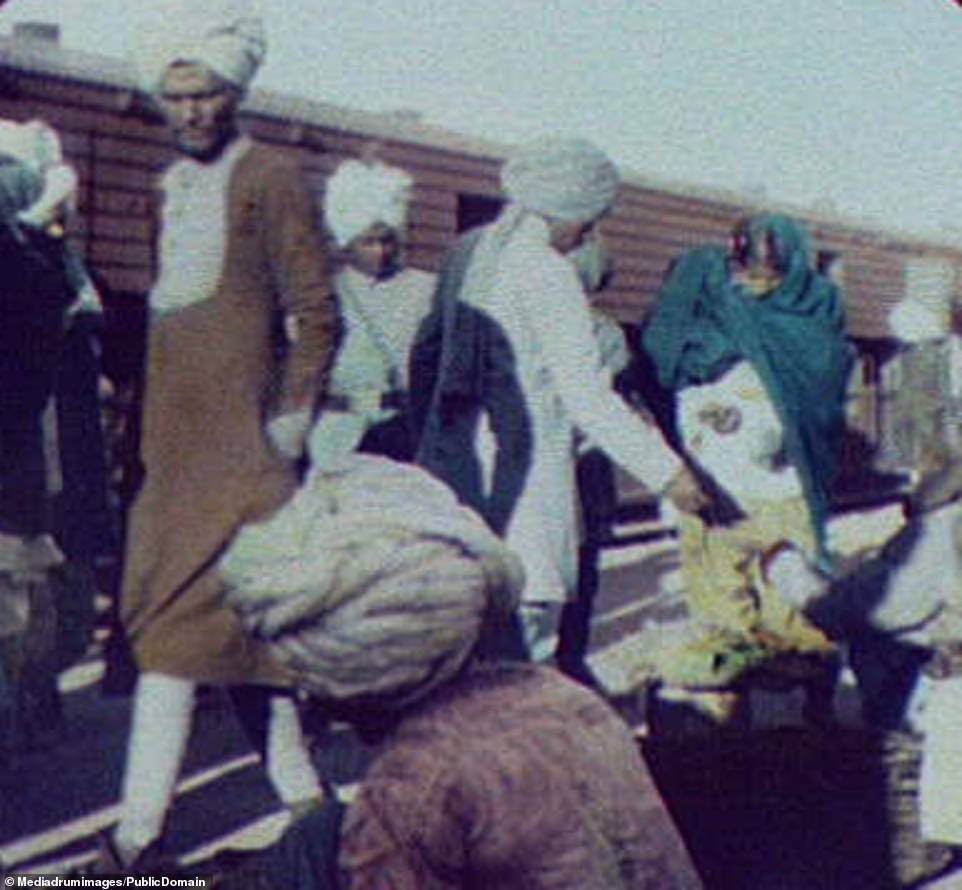 A food vendor enjoys roaring trade at the train station. Under the British Raj in the late 19th century a modern railway system was installed in India which was the fourth largest in the world 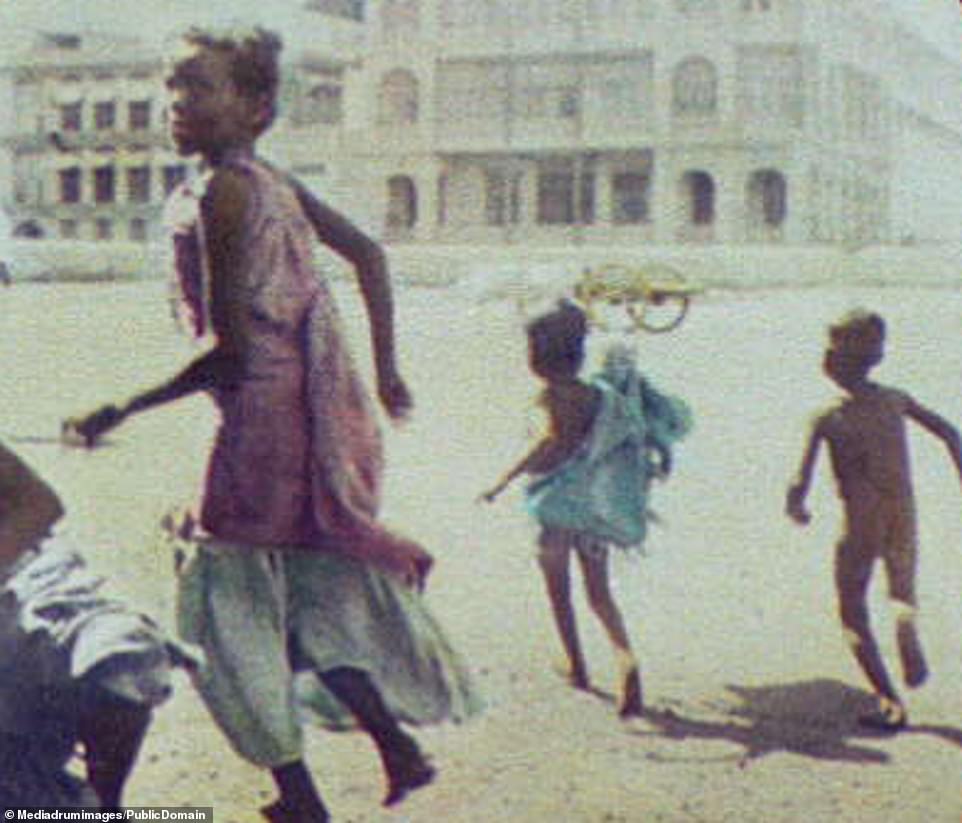 A mother plays with her two young children in this heartwarming scene captured in 1895. Throughout the British Raj India retained a strong sense of self – but it would be over fifty years after this photograph was taken that the country received its independence 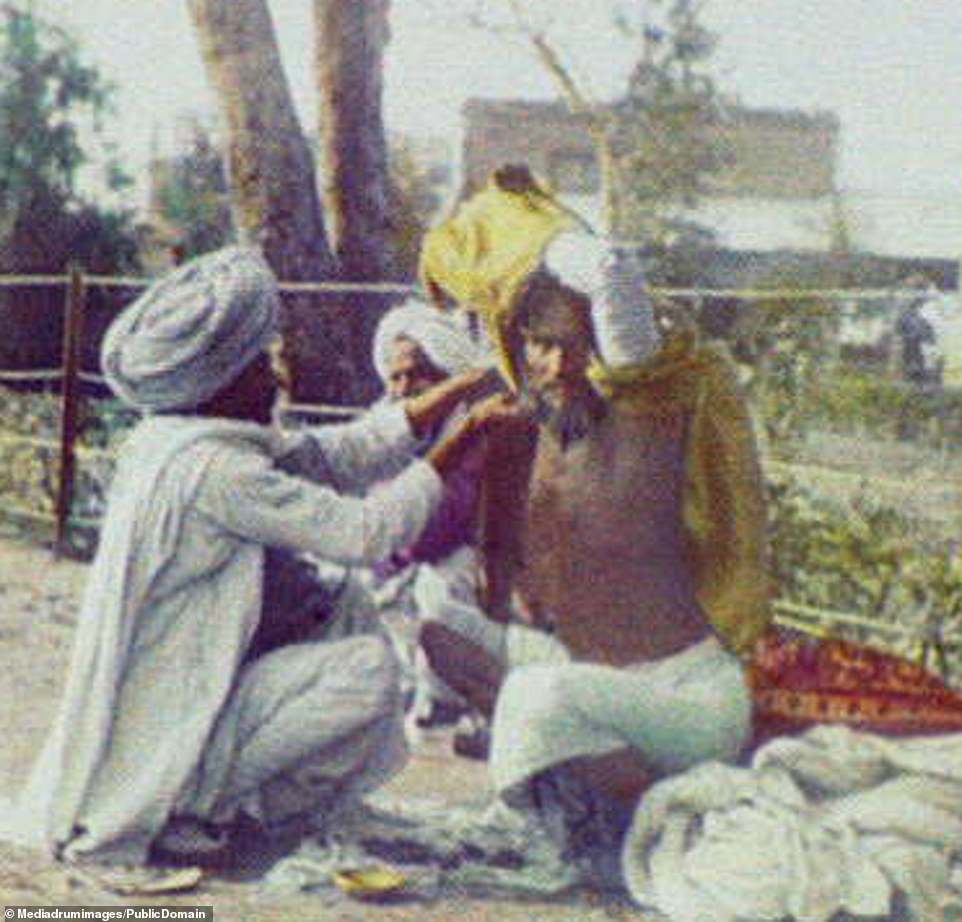 William Henry Jackson captured these three Hindu men sitting down on the road having a discussion in 1895. One has noticed him taking a shot