BAGHDAD/HILLA, Iraq (Reuters) – Iraqi security forces opened fire on thousands of demonstrators who defied a curfew in Baghdad on Thursday and exchanged fire with gunmen in southern cities, bringing to 27 the death toll from three days of anti-government protests.

Two policemen and two protesters were killed late on Thursday in the city of Diwaniya some 160 km (100 miles) south of Baghdad, according to police.

In nearby Hilla one protester was bludgeoned to death, according to police and hospital sources.

Three more died in a district of Baghdad and elsewhere in the capital protesters had set fire to army vehicles, security sources said.

The protests, in which more than 600 people have also been wounded, began over unemployment and poor services but have escalated into calls for a change of government and pose one of the worst security challenges in years in the war-weary country.

They appear to be independent of any political party and seemingly took the security forces by surprise.

“The bullets do not scare us. They do not scare Iraqis. This will all come down over their heads,” said one protester in the capital.

At least 4,000 protesters gathered in Baghdad’s Tayaran Square and attempted to march onto the central Tahrir Square but were met with open fire and heavy tear gas.

Police used live ammunition in the Zaafaraniya district of Baghdad, where three protesters were shot dead, and there were protests in the northwestern Shula district.

Police said protesters had fired at them in the town of Rifae near the southern city of Nassiriya where seven people were killed overnight and another on Thursday. Fifty people were wounded in Rifae, including five police, they said.

Four people were killed in clashes overnight in another southern city, Amara.

Amnesty International called on Prime Minister Adel Abdul Mahdi’s government to rein in the security forces and investigate the killings.

“It is outrageous that Iraqi security forces time and again deal with protesters with such brutality using lethal and unnecessary force. It is crucial that the authorities ensure a fully independent and impartial investigation,” said Lynn Maalouf, Amnesty International’s Middle East Research Director.

A curfew, lifted early in the morning in southern cities, was reimposed immediately in Nassiriya and later in Amara. Curfews have also been declared in the Shi’ite holy city of Najaf and in Hilla.

In Baghdad, the authorities attempted to head off protests by imposing a curfew from 5 a.m. Troops patrolled main roads and public spaces, but by morning sporadic demonstrations had begun, and troops opened fire with live rounds to disperse them. 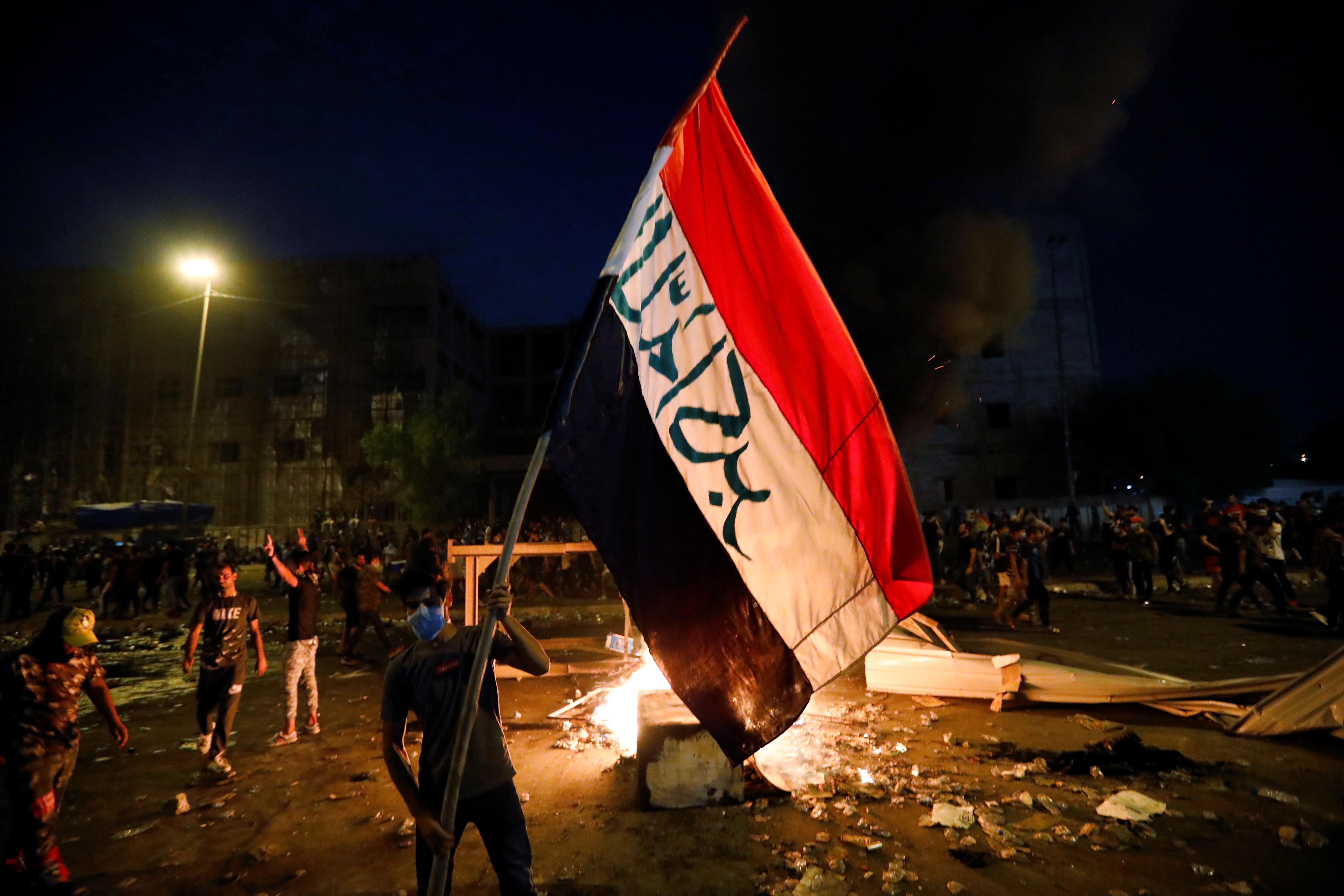 Residents of the capital queued outside supermarkets and food stores to stock up on supplies in case of a sudden rise in prices or further security restrictions by authorities.

Iraq has struggled to recover since defeating the Sunni Muslim hardline Islamic State group in 2017. Its infrastructure has been laid to waste by decades of sectarian civil war, foreign occupation, two U.S. invasions, U.N. sanctions and war against its neighbors.

With the country at last at peace and free to trade, many Iraqis say their government has failed to rebuild the nation.

The demonstrations began in Baghdad on Tuesday and quickly grew and spread to other cities, mainly in Iraq’s south. Police have fired live rounds, tear gas and water cannon to disperse protesters.

Protesters directed their anger at a government and political class they say is corrupt and doing nothing to improve their lives.

“The people are being robbed. The people are now begging on the street. There is no work, you come to protest, they fire at you. Live gunfire,” said a man covering his face in a scarf.

Iraq has the world’s fourth-largest reserves of oil, according to the International Monetary Fund, but much of its population of 40 million lives in poverty and without decent healthcare, education or power and water supply.

The violence began just days before the Shi’ite pilgrimage of Arbaeen, when about 20 million worshippers are expected to journey across southern Iraq on foot for days in the largest annual gathering in the world.

The Iraqi unrest forced neighboring Iran to shut one of the major border crossings used by pilgrims. 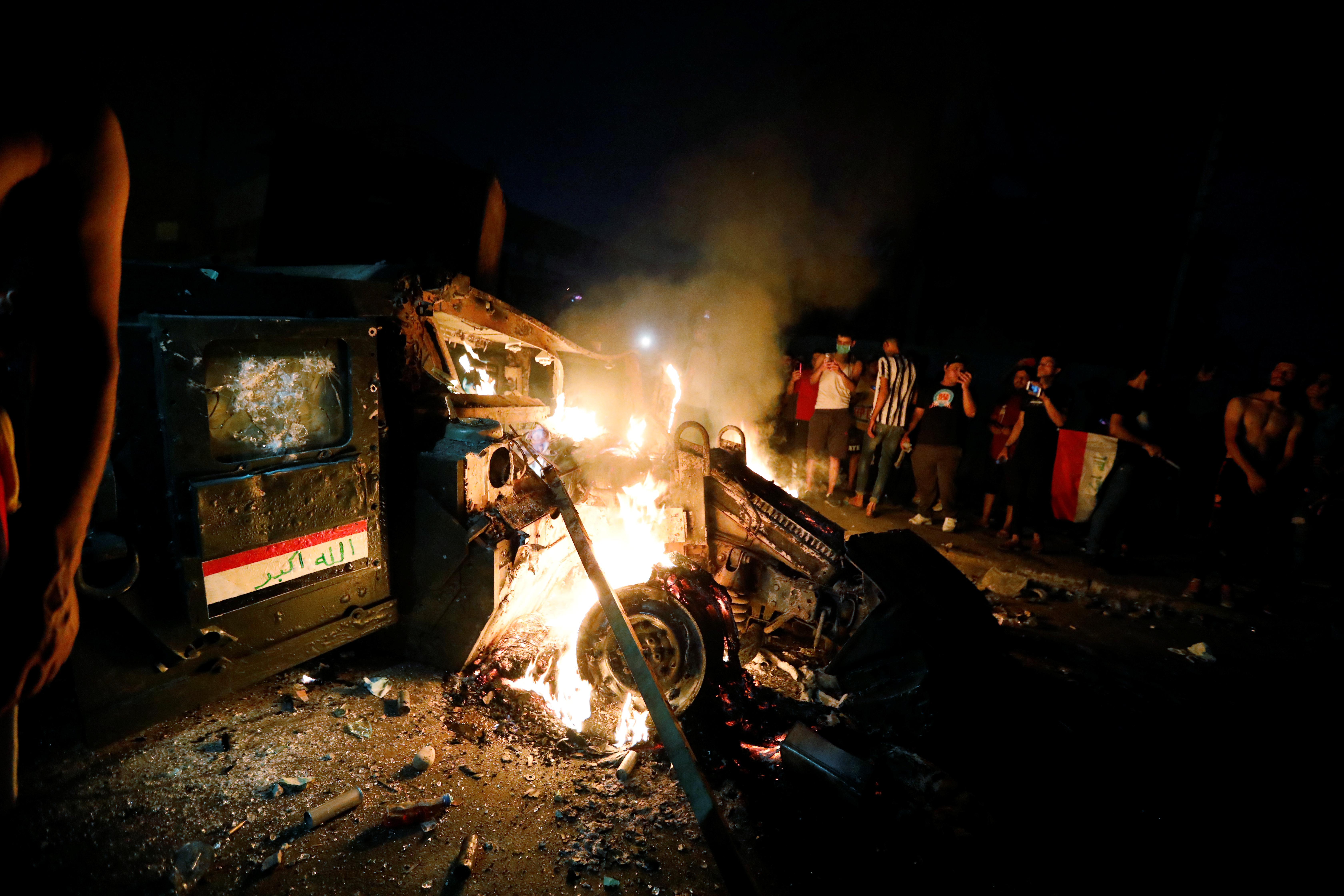 Prime Minister Abdul Mahdi chaired an emergency national security council meeting and ordered Thursday’s curfew in Baghdad. Only travelers to and from the airport, ambulances, some government employees and religious pilgrims were to be allowed on the streets.

He visited the Baghdad Operations Command on Thursday with the defense and interior ministers, state television reported.

Separately, police and medical sources said a couple who had been involved in the Basra protests last year were shot dead in their home late on Wednesday. Security sources said they had received threats from powerful militia groups in Basra last year.