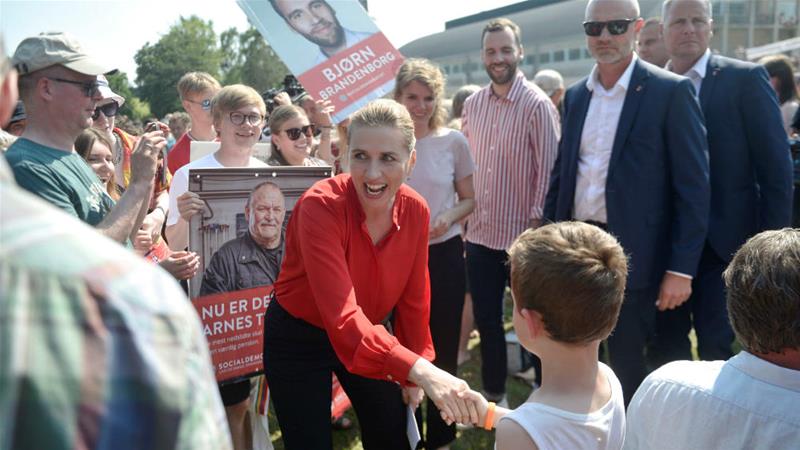 Exit polls in Denmark have shown the opposition is likely to win the most votes in the general election, marking a return to power for the Social Democrats after four years.

The centre-left party, led by Mette Frederiksen, adopted a restrictive stance on immigration and won 25.3 percent of the vote, according to exit polls for national broadcasters DR and TV 2.

It would likely be supported by a “red bloc” of other leftist parties that also made gains, giving the overall bloc 90 seats in the 179-seat parliament. The centre-right bloc was set to win 75 seats.

If the Social Democrats emerge victorious, they have said they intend to form a minority government – common in Denmark’s proportional representation system – relying on the support of other parties to pass legislation.

In the Copenhagen suburb of Varlose, Frederiksen cast her vote and told reporters her party’s tougher immigration policies were winning back supporters.

“Some Social Democrat voters who have been lost in the last few years, who didn’t support our migration policy, are returning this time,” she said.

As Denmark enjoys robust growth, almost full employment and strong public finances, the Social Democrats focused its campaign on climate issues and the defence of the welfare state, promising to reverse budget cuts to education and healthcare.

Analysts believe the Social Democrats would likely cooperate with the right on immigration and with the left on other matters in the Scandinavian country, which is a member of the European Union but not the eurozone.

“Many voters want change. In particular, the ‘millennials’, who can vote for the first time,” Flemming Juul Christiansen, a political scientist at Roskilde University, told AFP news agency.

Prime Minister Lars Loekke Rasmussen’s three-party coalition within the “blue bloc” hasn’t been campaigning together, and none wants to rely on support from the anti-immigration newcomers, the Hardliner Course and New Right.

Voting at a school in Copenhagen, Rasmussen said he was staying “calm”.

“The only count that matters is the one that can be settled when the election is decided tonight,” he told reporters, in remarks reported by AFP news agency.

According to news agency Ritzau, over 60 percent of Denmark’s 4.2 million eligible voters had cast their votes by 4pm (14:00 GMT), on a warm sunny day.

Voter turnout is traditionally high in Denmark. In 2015, 85.9 percent cast their ballots. In comparison, the 2016 US presidential election saw 55.7 percent of eligible voters turning out at the polls.

According to a Gallup poll published in February, some 57 percent of Danes – and 69 percent of 18 to 35-year-olds – think the next government should prioritise climate change.

Some voters at polling stations emphasised the health of the planet was a major concern.

“I think it’s climate that’s the most important, so that’s what I voted for,” said Amalie Falck-Schmidt, 29.

Ahead of the vote, opinion polls suggested the far-right Danish People’s Party, which has informally supported Rasmussen’s minority government, could lose almost half its support, shrinking to 10.7 percent.

For the past two decades, the anti-immigrant party has supported successive right-wing governments in exchange for tighter immigration policies.

But as those policies have now been broadly adopted by almost all other parties, the Danish People’s Party has lost its unique appeal.

The Social Democrats last year announced their own proposal to crack down on immigration, including sending asylum seekers to special camps in North Africa while their requests are processed.

The Danish People’s Party’s slide has coincided with the emergence of two more extreme far-right parties, The New Right and the anti-Muslim Hard Line.

Jibran Sawar, a Danish Muslim who cast his vote with his family in the capital, said he wanted to use his vote to stop the country from taking a “course” that would be detrimental to Muslims.

Sawar added he knew many young Muslims, who did not normally vote, were doing the same.

“They [far-right parties] have actually done something that a lot of Muslim leaders couldn’t do here in Denmark. They’ve united us,” he told AFP.