A Colorado man who had worked as a TV station’s unlicensed security guard pleaded not guilty Friday in connection with a fatal shooting that occurred during a “Patriot Muster” protest last October.

Defendant Matthew Dolloff faces second-degree murder charges in the death of Lee Keltner, 49, a U.S. Navy veteran and participant in a pro-police “Patriot Muster” protest in Denver on Oct. 10.

Dolloff was working as a security guard for Denver station KUSA-TV when a confrontation broke out that led to Dolloff allegedly fatally shooting Keltner, authorities have said.

The security guard was later found to be lacking a Denver license for the job, FOX 31 of Denver reported.

Dolloff has been freed, awaiting further legal action, since posting a $500,000 bond on Nov. 3, according to the station. 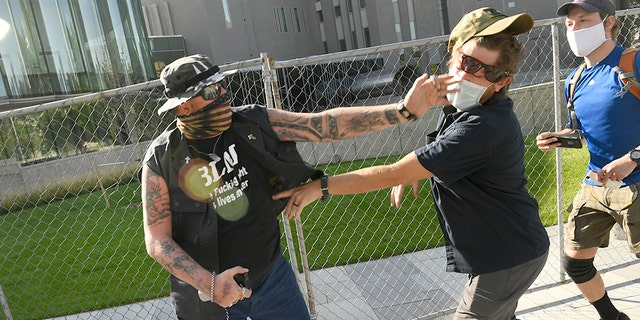 A man strikes another man after a rally in Denver last October. The man at left was supporting the "Patriot Muster" rally. He engaged with the man on the right, hit him in the face and sprayed him with mace. The man at right then shot and killed the protester at left. The man who was killed, identified as Lee Keltner, operated a hat-making business in the Denver area. (Getty Images)

The defendant’s attorney claims that body camera footage and “significant” data from Keltner’s cell phone, newly disclosed by prosecutors, provide evidence that Dolloff was acting in self-defense, FOX 31 reported. The defense plans to file motions in the case, the attorney said.

A bystander tried to de-escalate the argument and Keltner appeared to pull out a can of pepper spray or Mace, according to a cellphone video taken by a KUSA-TV producer.

At one point, Kelter walks out of view of the video and a man appearing to be him gets angry at being filmed. 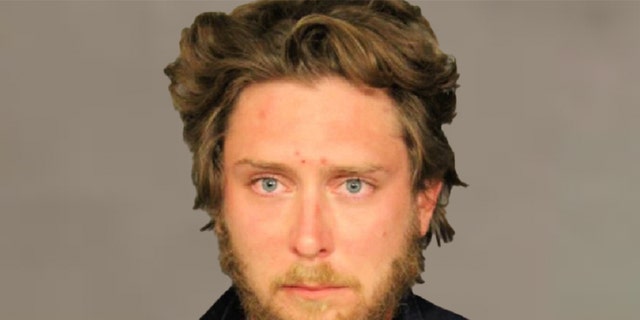 Matthew Dolloff faces a murder charge in the death of Lee Keltner during a Denver rally last October. (Denver Police/Twitter)

“Get the cameras out of here or I’m going to (expletive) you up,” the unidentified man says.

The recording stops for 12 seconds.

Authorities said Keltner then got into a scuffle with Dolloff before slapping him in the face and using the spray on him. Dolloff then allegedly shot him dead. The cellphone video picks up as police secured the scene after the shooting.

KUSA-TV had hired Pinkerton to provide security on the day of the protest, and Pinkerton subcontracted the job to Isborn Security Services LLC, FOX 31 reported. An official with the Denver Department of Excise and Licenses recommended a six-month license suspension for Isborn for hiring Dolloff, according to the station.