Disney (DIS) saw positive news this week when it announced that its streaming service added 7.9 million subscribers, far exceeding analysts' estimates of 4.5 million. The new sign-ups came despite Disney being in conservatives' crosshairs amid its battle with Florida's governor over the state's so-called "don't say gay bill."

The back and forth with Gov. Ron DeSantis has raised the question of whether it represents a one-off battle or a fundamental change in the relationship between corporations and politicians.

In a new interview with Yahoo Finance, U.S. Rep. Kevin Brady, a Texas Republican, suggested the latter is true and that, more broadly, America's corporations are weighing in on social issues when they should be sticking to their lane while engaging with lawmakers.

“We live in a political world and I think businesses do best when they really focus, at least on their relationship with us, on these key issues of the economy,” he said in response to a question about the relationship between conservatives and businesses.

“I think the new paradigm today is that if businesses are engaged in social issues, they are entering a part of politics fairly new to them and I think there will be pushback from parties, depending on where the businesses stand,” he added, during a wide-ranging conversation on Thursday.

Like all media companies, Disney’s stock has taken a hit in recent months following Netflix’s recent announcement that it has lost subscribers. However, Disney has been a relative winner during the recent tough economic climate.

The battle over the ‘don’t say gay’ law

DeSantis has battled with Disney for weeks now following the company’s stance against a new Florida law that bans the teaching of issues related to sexual orientation or gender identity to kids younger than third grade. The dispute heated up last month when the governor successfully lobbied for the Florida legislature to revoke Disney's special tax status in the Sunshine State because of its opposition to the law, which is formally called the “Florida’s Parental Rights in Education Act.”

The DeSantis-Disney drama also comes as corporations across the U.S. face increased pressure to weigh in on social issues, from voting rights to abortion to laws targeting transgender athletes.

For his part, Brady — a key architect of 2017 tax cuts that slashed the corporate tax rate — says he is more eager to have businesses focus on developing the economy over social issues.

“I love it when the business community focuses on helping lifting people up,” says Brady, who has led Republicans on the influential House Ways and Means committee since 2015.

DeSantis says his law, which goes into effect this summer, aims to combat “gender ideology” and seeks to avoid turning schools into "a playground for ideological disputes.” Still, the new law has attracted widespread criticism — and not just from businesses like Disney.

Critics say it would silence LGBTQ+ students and also students who live in LGBTQ+ households, and that it may also violate educators’ First Amendment rights to speak out about gender issues. 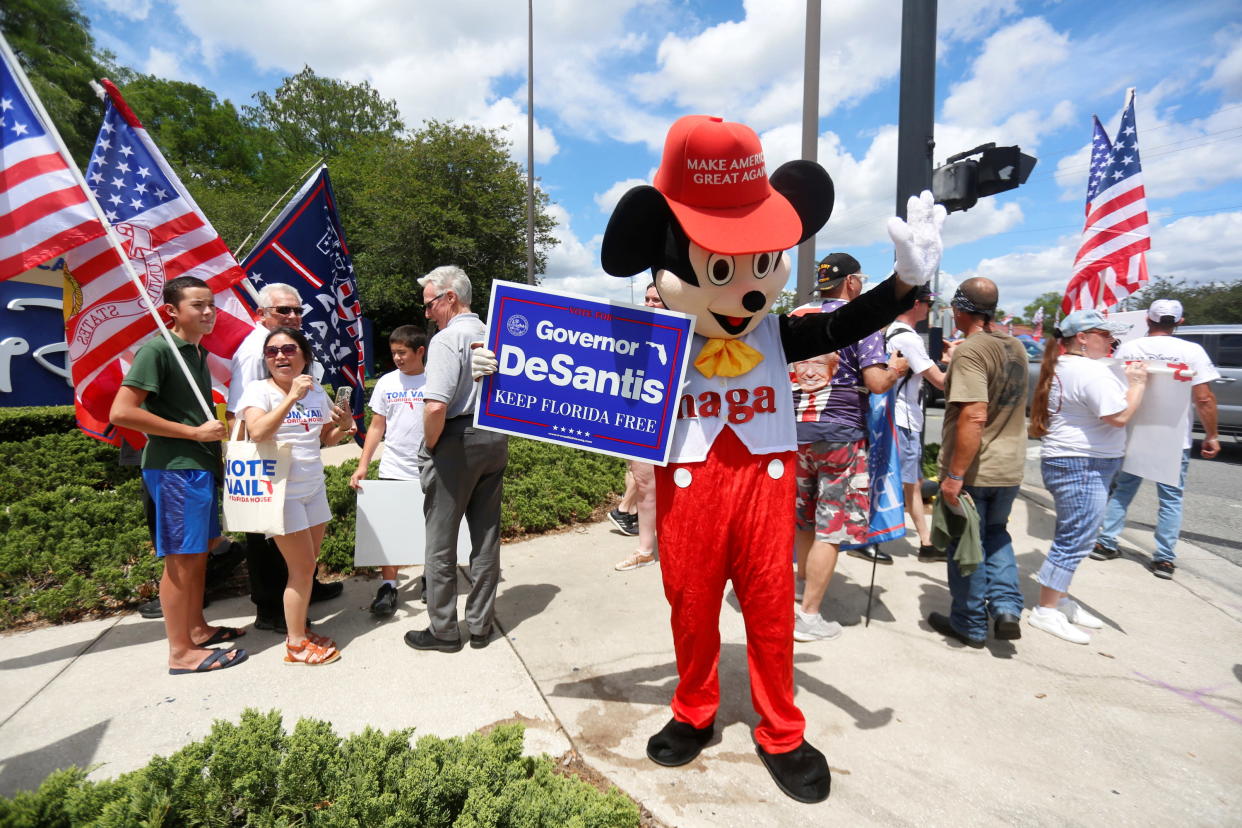 Transportation Secretary Pete Buttigieg, the first openly gay man who has served in a presidential Cabinet, recently criticized the law to Yahoo News, noting that if his own young children grew up in Florida, the law “might stop them from mentioning they had a great time over the weekend with their dads.”

For its part, Disney says the bill "never should have been signed into law" and that the company will work to ensure the legislature repeals the law or courts strike it down.

President Joe Biden has also criticized the law and mocked DeSantis for his actions against Disney.

“Ronald Reagan said, ‘Mr. Gorbachev, tear this wall down.’ Today’s Republicans say, ‘Tear down Mickey Mouse’s house,’” Biden joked at the recent White House Correspondents dinner. “Pretty soon, they’ll be storming Cinderella’s Castle, you can be sure of it,” he added.

The back and forth between Disney and politicians won't likely die down anytime soon. In Washington, Sen. Josh Hawley (R-Mo.) is trying to open a new front in the fight by introducing a bill to strip Disney of special copyright protections, though the Democratic-controlled Senate isn't expected to advance the bill.

For his part, Brady, who worked as an executive at local chambers of commerce before entering the House, says he's “eager to sort of refocus on the opportunities we create for people when we focus on a good economy and rising paychecks.”

Ben Werschkul is a writer and producer for Yahoo Finance in Washington, DC.