Mexico City: US Vice-President Kamala Harris has wrapped up her first official foreign trip but she got more attention back home for something else: her tougher-than-expected words on immigration.

Harris first angered some on the left with her strong statement in Guatemala telling desperate would-be migrants “do not come” to the US border, and warning that they’d be “turned back”. She then created a political dust-up — fanned on the right — with her defensive replies to questions about her failure so far to go to the US-Mexico border.

The blowback swirled amid the Vice-President’s diplomatic debut in Mexico City on Tuesday, a day after her visit to Guatemala’s capital. She met for more than two hours with Mexico’s populist President, Andres Manuel Lopez Obrador, and declared “we are embarking on a new era” in US-Mexico relations, and with the world more broadly. 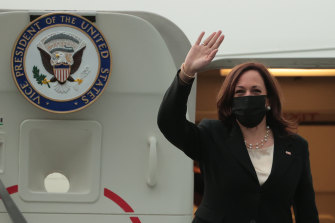 At a later news conference before returning to the United States, she said, “Do I declare this trip a success? Yes, I do.

“It is a success in terms of creating a pathway that is about progress.” Asked whether she would commit to visiting the border, where migrants have converged seeking entry, and do so soon, she replied, “Yes, I will, and I have before”.

In her two stops, Harris pledged millions of dollars in American loans and investment for housing and agriculture in both southern Mexico and northern Guatemala, and $US130 million ($168 million) for improving working conditions in Mexico, including addressing safety issues and child labour. Such projects are key to the focus of Harris’ diplomacy: discouraging residents from fleeing the impoverished region. 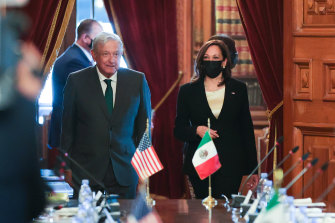 Her two-day trip to Guatemala and Mexico was aimed in particular at curbing the influx of Central American migrants through Mexico to the US border, by addressing the root causes such as poverty and violence that spur their flight. In Guatemala City, she also met President Alejandro Giammattei, community activists and entrepreneurs.

In her news conference, Harris emphasised, “The issue of root causes is not going to be fixed in one trip that took two days.”

But the questions that dogged her, as well as administration officials back at the White House, were from reporters and politicians asking why she had not visited the border as part of her mandate to confront the “root causes” of Central Americans’ migration, and about the criticism of her warning to migrants. 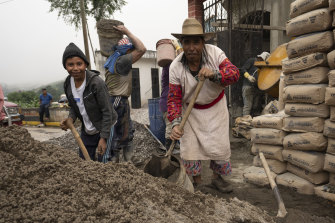 Workers build a house for the family of a neighbour who migrated to the US in the Mam Indigenous community of San Martin Sacatepequez, Guatemala.Credit:AP

Harris especially provoked criticism with her remarks in an interview with NBC News. She bristled when broadcaster Lester Holt pressed her about a border visit. “And I haven’t been to Europe,” Harris responded. “I don’t understand the point that you’re making. I’m not discounting the importance of the border.”

“We made clear that the United States considers Mexico to be a partner on many of these issues,” Harris said, characterising her talks with Obrador as candid and covering migration, human smuggling and drug trafficking.

Before their one-on-one session, Obrador welcomed Harris in a brief ceremony on the central patio of the National Palace. “Mucho gusto,” she responded in Spanish. “It’s very good to see you.”

They were greeted by salutes from uniformed military personnel and looked on as American and Mexican representatives signed an agreement to broaden US-Mexico cooperation on sending development money to the three Central American countries that are the source of most northbound migrants fleeing poverty and violence — Guatemala, El Salvador and Honduras. The text of the agreement was not immediately released, so it is unclear how broad or meaningful it is.

As Obrador showed Harris the spectacular mural by Diego Rivera that overlooks the courtyard and depicts centuries of Mexican history, he responded to a question shouted by a reporter asking whether he would increase security at Mexico’s border with the United States.

“We are very pleased to have her here and we will touch on that subject but always addressing the fundamental root causes,” he said.

He was the only member of either delegation who did not wear a mask.

In addition to meeting with Obrador, Harris spoke with female entrepreneurs and held a separate meeting with labour leaders. She is leading the Biden administration’s efforts to expand organised labour in the United States, and administration officials see Obrador, who has also championed labour rights, as a kindred spirit. Yet some US unions complain that Mexico is not living up to its promises in trade deals to support labour rights.

Administration officials had not expected the meeting with Obrador to be necessarily easy or predictable. In national elections on Sunday, he appeared to be losing sway in the legislative branch, where many of his allies were defeated. The final results are not yet clear.

Obrador has at times taken shots at the United States to win favour with his domestic audience. Just before a virtual meeting with Harris in May, he sharply criticised American aid to an anti-corruption group, even as Harris was emphasising the need to root out corruption in Latin America to stem migration north. The Mexican President has attacked other independent watchdogs and reporters, posing a challenge to the Biden administration given its stated goal of promoting democratic institutions around the world. Yet the leftist leader has maintained favour with the US, including during the Trump administration, for helping with border enforcement.