Immunologist and US physician Anthony Fauci argued against the negative press attention the AstraZeneca vaccine has gotten. While speaking on ABC’s Good Morning America (GMA), Mr Fauci insisted there were vigorous safeguards put in place to ensure that it was safe for the public. He added that the banning of the vaccine in Europe, for a brief time period, has only added to vaccine scepticism.

He insisted, when the vaccine is used in the US it will be cleared by the Food and Drug Administration (FDA) beforehand.

Mr Fauci admitted that it was unfortunate that some of the information in the initial AstraZeneca vaccine was outdated as this has sparked further concern.

ABC GMA host Robin Roberts said: “I don’t have to tell you that people are hesitant when it comes to vaccinations.

“They are hesitant with this one in particular as the vaccine was suspended for a time. 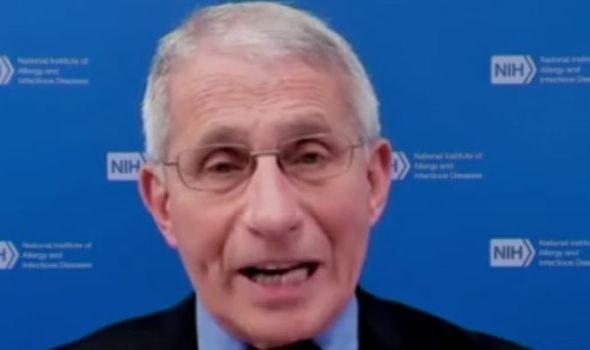 “How do address those concerns especially if this becomes of use in the US?”

Mr Fauci said: “It really is unfortunate that this happened.

“This is really what you call an unforced error.

“The fact is that this is very likely a very good vaccine, this kind of thing does nothing but casts some doubt about the vaccines and contributes to the hesitancy.

“It was not necessary because if you look at the data they are quite good.

“When they put it into the press release it wasn’t completely accurate.”

“We have to keep trying as hard as we can to get people to understand there are safeguards in place.

“I think the data and safety monitoring board picking up this discrepancy was an example of a safeguard.

“At the end of the day, all of this is going to be decided by the FDA.

“They will independently go over every bit of data themselves and not rely on any interpretation from anyone.

“This is including the company.”