Average rainfall over winter will not be sufficient to avoid drought conditions in England continuing beyond spring 2023, the National Drought Group has forecast.

This could lead water companies to impose strict water saving measures, including banning all non-critical use, such as refilling swimming pools and cleaning non-residential buildings.

The National Drought Group is made up of senior decision-makers from the Environment Agency, government, water companies, and farming and environmental groups.

At a meeting on Friday, the group heard that water companies were preparing to implement drought plans over the next six months to improve the resilience of water supplies.

It comes after below average rainfall this year led to drought conditions across the country, with the South and East of England experiencing the worst impacts. 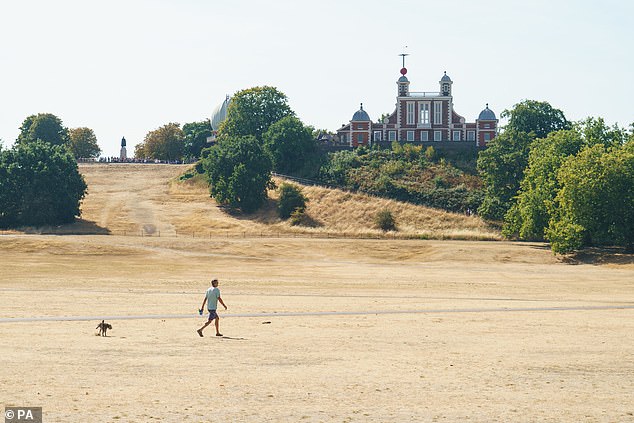 Average rainfall over winter will not be sufficient to avoid drought conditions in England continuing beyond spring 2023, the National Drought Group has forecast (Pictured: Greenwich Park, London, near the Royal Observatory, in August)

Indeed, the Environment Agency (EA) has reported that despite average rainfall in September, much of England remains in drought, with low river and groundwater levels, and reservoir stocks continuing to decrease.

The group heard that if rainfall remains below average over winter, then impending drought or drought conditions will remain beyond spring 2023 in some areas of England, including parts of the South West, South East, East and Yorkshire and East Midlands.

They were also told that even if rainfall returns to average levels, some areas will still see drought conditions.

The projections were presented to the group by the EA, and were made up of contributions by various members, including the water companies.

Those gathered heard that investment in water infrastructure will be needed to ensure long-term water security.

‘Our lives, livelihoods and nature all depend on one thing – water,’ he said.

‘Climate change and population growth mean we need to take action now to ensure we have enough over the coming decades to manage everyday supplies, and more intense drought events.

‘We have a plan to do that and delivering it will require all of us to work together: government, water companies, regulators, farmers and businesses, and each of us as individuals. The Environment Agency is determined to do its part.’

Water Minister Trudy Harrison added that we need to ‘adapt’ to ensure our water supplies are resilient in the future.

‘The record-breaking temperatures, unusually low rainfall and widespread drought the country has experienced this year are a reminder that we need to adapt to ensure our water supplies are resilient and secure in future,’ she said.