Brexit means the Netherlands has 'lost an ally' says expert

The exit poll showed Mr Rutte’s VVD party was forecast to take 35 seats in the Dutch lower house, which would provide him with a clear mandate to form a new coalition Government, The pro-European Union centre-left D-66 party is projected to finish in second place with 27 seats. By the end of Wednesday afternoon, turnout was 57 percent compared to 55 percent during the last election four years ago.

Around 13 million people were eligible to vote and able to choose from dozens of political parties fighting for spots in the 150-seat parliament.

The party, a junior member of Mr Rutte’s current coalition, had made late gains in the most recent opinion polls, predominantly driven by the performance of its leader Sigrid Kaag in televised debates.

The two polls prior to this evening’s latest findings, which were conducted after voting started on Monday, showed Mr Rutte’s party taking around a quarter of the vote. 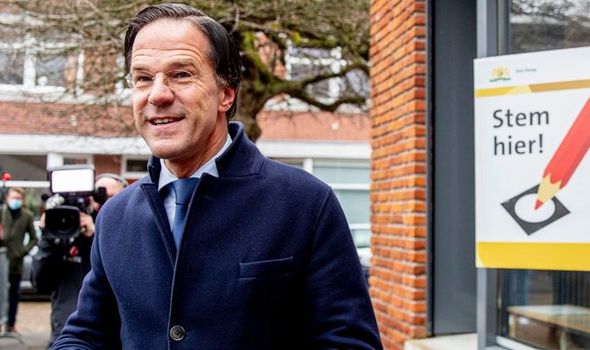 The likelihood is the three party’s aside from the Freedom party will form a new coalition Government with one or two other parties, but this process usually takes several months to complete.

This year’s election seen elderly voters were permitted to use mail-in ballots, with polls opening two days early to allow for social distancing.

The election was widely regarded as a referendum on the Dutch Government’s performence during the coronavirus pandemic, which has seen more than 16,000 die of Covid-related illnesses.

Police have also clashed with protesters opposed to the strict lockdown measures being enforced by Mr Rutte’s Government.

The Prime Minister’s closest rivals have continued to lash out at the Netherlands’ slow vaccine rollout.

During his final debate on Tuesday night, Mr Rutte, one of Europe’s longest-serving politicians who has been in office since 2010, said: “I’ve been taking responsibility for the past 10 years.