Earlier lockdowns DO shrink Covid-19 outbreaks quicker, study shows (and Britain was one of the slowest to introduce the rules)

Earlier lockdown restrictions have been proven to slash the number of Covid-19 cases in a study of 149 countries.

Researchers measured how numbers of Covid-19 cases changed over the course of the pandemic and whether they dropped in the days following strict rules.

They looked at five physical distancing measures; closure of schools, workplaces and public transport, a ban on mass gatherings, and full-scale lockdowns.

The interventions led to a larger reduction in cases when they were implemented early than late – 14 per cent compared with 10 per cent.

It took an average of nine days for countries to recommend social distancing once the first case was detected there. But some countries took far longer.

Britain was one of the slowest to introduce the life-saving lockdown measures along with Thailand, Australia and Canada.

It took 45 days from the first reported case, on January 31, for Prime Minister Boris Johnson to advise social distancing on March 16. The full lockdown didn’t come for another week, starting on March 23.

Cases shrunk by 17 per cent as a result, which was higher than the average but low compared to fast-reacting Andorra where cases dropped by 36 per cent.

The researchers concluded that physically keeping people apart clearly reduced global cases of Covid-19 – which has so far infected 13.3million and killed almost 578,000. 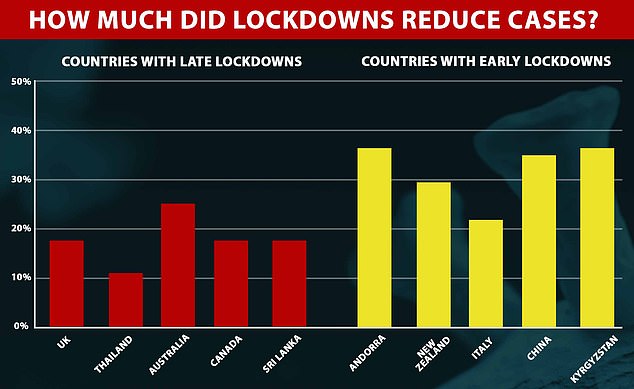 The team of US and UK researchers set out to measure the efficacy of coronavirus-control measures that have become so regimented in everyone’s lives.

A team led by the University of Oxford gathered data for daily reported cases of Covid-19 between January and May 30 in 149 countries or regions.

Nations have responded differently to the arrival of Covid-19, with some quick to ban all social mingling and others tacking a much more relaxed approach.

Dr Nazrul Islam and colleagues measured how the incidence rate of Covid-19 changed before and up to 30 days after implementation of physical distancing measures in each country.

On average, they caused a 13 per cent reduction in daily cases in the 30 days following their introduction, the findings published in the British Medical Journal show.

BRITAIN AND BELGIUM RANK WORST FOR TACKLING THE COVID-19 PANDEMIC

Britain ranks near the bottom of a damning global league table that compares how countries have tackled the Covid-19 pandemic.

Only Belgium fared worse, according to a review of testing, healthcare and death rates that gave 21 OECD member nations a score out of four.

The UK (2.22) was on par with Italy and Spain. Sweden, which controversially bucked the trend and opted against imposing a lockdown, scored higher (2.56).

The Economist Intelligence Unit created an index to assess the quality of responses across more than half of the 37 OECD member nations.

All of the countries — including the US and Australia — received a score of between one and four on three different ‘quality of response’ measures.

These included the number of tests available, provision of non-Covid-19 healthcare and excess deaths, or how many more people died than expected.

Nations were also given a score for three coronavirus risk factors, including obesity prevalence and their percentage of over-65s.

The final risk factor related to international arrivals, based on the number of people who travelled to the country as a share of the population.

Each country got an average score, with excess deaths given the biggest weighting because it was deemed the most important mark.

Analysts behind the report claimed the low scores recorded for both Spain and Italy were ‘understandable’, given they were the first in Europe to be hit.

They said the UK’s response was too slow even though it had ‘time to prepare’, and also blamed a lack of testing capacity and the controversial decision to abandon contact tracing in March.

New Zealand fared the best (3.67). The US — whose performance was ‘not as poor’ as the death figures suggest — came mid-table (3.11), the report revealed.

Banning mass gatherings seemed to make the biggest difference to decreasing Covid-19 incidence, according to analysis of the data.

Research has previously shown that concerts, nightclubs and sports events could be the biggest driver of the disease spreading because all it takes is one highly contagious person to cause an outbreak.

The closure of public transport had the least effect on reducing the Covid-19 incidence when the other four physical distancing measures were in place.

A ban on travel only helped to reduce cases by an additional two per cent in the 72 countries who adopted it.

This is likely because people are generally using public transport less during lockdown anyway.

The data also show that the earlier a country told its citizens to physically distance after the first confirmed case, the larger a reduction in the incidence of Covid-19.

Early lockdown measures led to a 14 per cent reduction in cases compared with 10 per cent in a delayed response, on average.

Some countries took longer to implement measures than the average of nine days, with Thailand (58) and Australia (51) taking the most. Cases there dropped by 11 and 25 per cent respectively.

Canada, Sri Lanka and Britain all took 45/46 days to implement stringent physical distancing rules, which allowed Covid-19 incidence to drop by 17 per cent in each nation.

Prime Minister Boris Johnson announced changes to UK government advice on March 16, advising social distancing and self isolation if someone in your household has symptoms. The virus had been confirmed in York on January 31.

A lockdown was not implemented until March 23, when almost 1,000 infections had been confirmed and thousands more were left untested.

Meanwhile in Andorra, the first set of physical distancing measures came into effect on March 12, 10 days after the first case was confirmed on March 2.

It helped lead to the 36 per cent reduction in Covid-19 incidence in the following 30 days.

Other nations that came with tougher, earlier rules and saw their cases drop drastically include New Zealand (29 per cent), China (35 per cent), Kyrgyzstan (36 per cent) and Italy (26 per cent).

The latest research gives ‘important insight’ into the effectiveness of physical distancing, Dr Thomas May, a research professor at Washington State University said in a linked editorial.

The biggest strength of the study is it uses real data on Covid-19 cases from the past few months, rather than predicting them using modelling.

But Dr May warned to take the findings with a pinch of salt considering countries each report their Covid-19 cases differently.

‘The study’s conclusions are probably correct, but we cannot know this for certain from case data collected so unsystematically by countries around the world,’ he wrote in the BMJ.

‘We must be careful, then, not to mislead or overplay politically convenient findings and risk violating the public trust necessary for an effective pandemic response.’

There have been serious concerns raised about the reliability of testing data coming from some countries.

In the UK as well, the Covid-19 cases only cover those who were able to get a test, which was extremely limited in the early stages of the pandemic.

Even now, people can only get a test if they have symptoms, but it is thought ‘silent carriers’ account for up to half of all infections.