The most serious outbreak of locusts in 25 years is spreading across East Africa with a single swarm covering an area one-and-a-half times the size of Greater London.

Unusual climate conditions are partially to blame for the plague, which is posing an unprecedented threat to food security in some of the world’s most vulnerable countries.

The insects are devouring crops, with Kenya one of the worst countries to be affected. A spokesman for the country’s Intergovernmental Authority on Development (IGAD) said: “A typical desert locust swarm can contain up to 150 million locusts per square kilometre.

“Swarms migrate with the wind and can cover 100 to 150 kilometres in a day.

“An average swarm can destroy as much food crops in a day as is sufficient to feed 2,500 people.” The outbreak of desert locusts, considered the most dangerous locust species, has also affected parts of Somalia, Ethiopia, Sudan, Djibouti and Eritrea, and IGAD warns that parts of South Sudan and Uganda could be next.

The outbreak is making the region’s food crisis worse, the UN Food and Agriculture Organisation (FAO) has warned.

Hundreds of thousands of acres of crops have been destroyed. 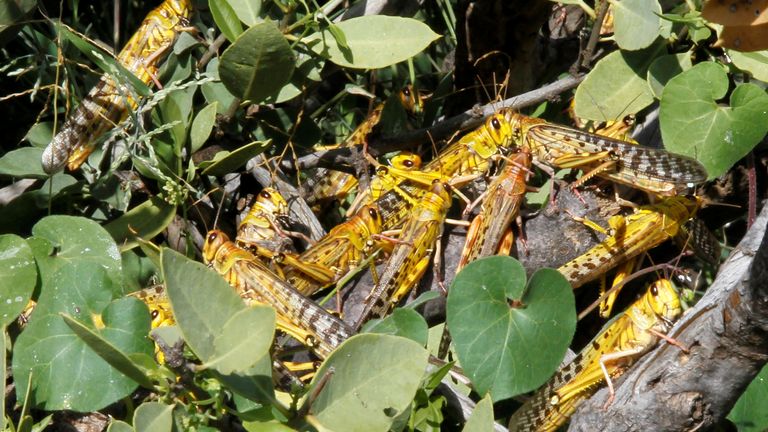 The further increase in locust swarms could last until June as favourable breeding conditions continue, IGAD said, helped along by unusually heavy flooding in parts of the region in recent weeks.

In Ethiopia, officials said they have deployed four small planes to help fight the invasion.