A young child who became the first cross-border case of Ebola in the world’s second-largest outbreak has died, health officials said.

The 5-year-old boy sought medical care at a hospital in western Uganda on Monday evening after he and five relatives crossed into the country from the neighboring Democratic Republic of the Congo, which is struggling to contain one of the deadliest Ebola outbreaks in history. The boy was transferred to an Ebola treatment unit, where he and his family were placed under isolation and tested for Ebola virus disease, according to separate statements from the Ugandan and Congolese health ministries.

Uganda’s Ministry of Health and the World Health Organization, the global health arm of the United Nations, confirmed late Tuesday night that the boy’s laboratory tests were positive.

The child died at the Ebola treatment unit in Bwera on Wednesday morning, according to the Ugandan health ministry.

His 3-year-old brother and 50-year-old grandmother have now tested positive for the deadly virus, bringing the total number of reported cases in Uganda to three. The pair remain under isolation at the same facility, the health ministry said.

“Ebola is a horrific illness that ravages the human body. We’ve been told this young boy was diagnosed after showing severe symptoms of Ebola, including vomiting blood,” Brechtje van Lith, the Uganda director for Save the Children, said in a statement Wednesday. “This first death, of a child, is a sickening reminder of the dangers of this disease. We are particularly concerned about the remaining stigma in some communities around Ebola, which can hinder the efforts of health teams and cause the disease to spread faster.” 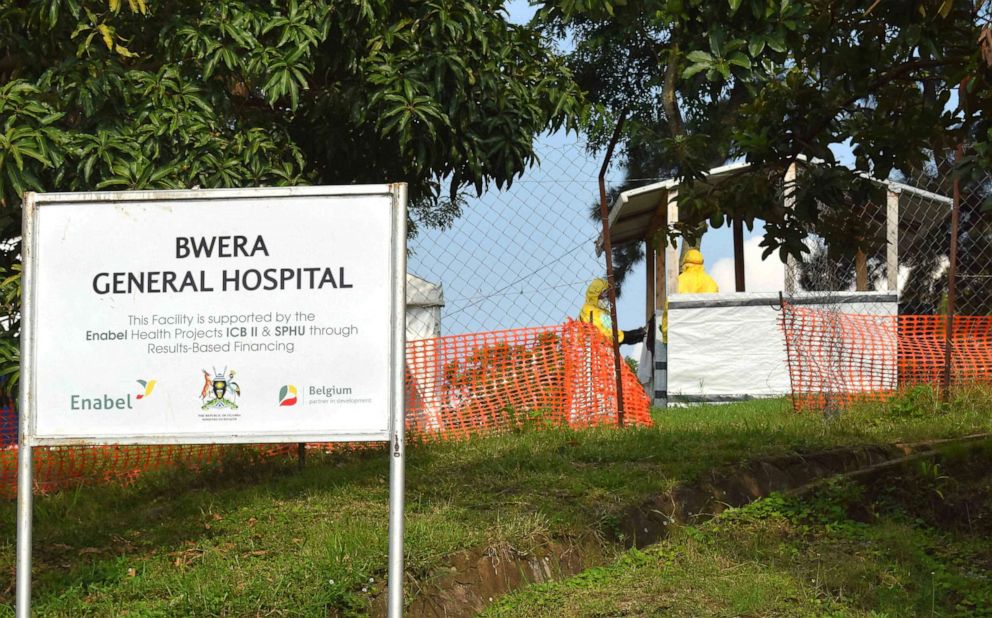 Health officials have identified and are in the process of following up with eight people in Uganda who have been in contact with the family.

“The ministry would like to reassure Ugandans and all other residents that with experience and expertise available in the country and the over 10 months of preparedness, the disease will be contained,” Uganda’s Ministry of Health said in a statement Wednesday. “We appeal to the public to remain calm and vigilant and report any suspected cases.”

It’s the first time that a confirmed case associated with the current epidemic in the eastern Democratic Republic of the Congo has been identified outside the outbreak zone and in a neighboring country. This is also the first case of Ebola in Uganda since 2013, and the first time that Uganda has reported a case of this particular strain.

“This is a sobering development that everyone has been working to avoid, and highlights the complexity of the Ebola outbreak in the Democratic Republic of the Congo,” Dr. Robert Redfield, director of the U.S. Centers for Disease Control and Prevention, said in a statement Tuesday. 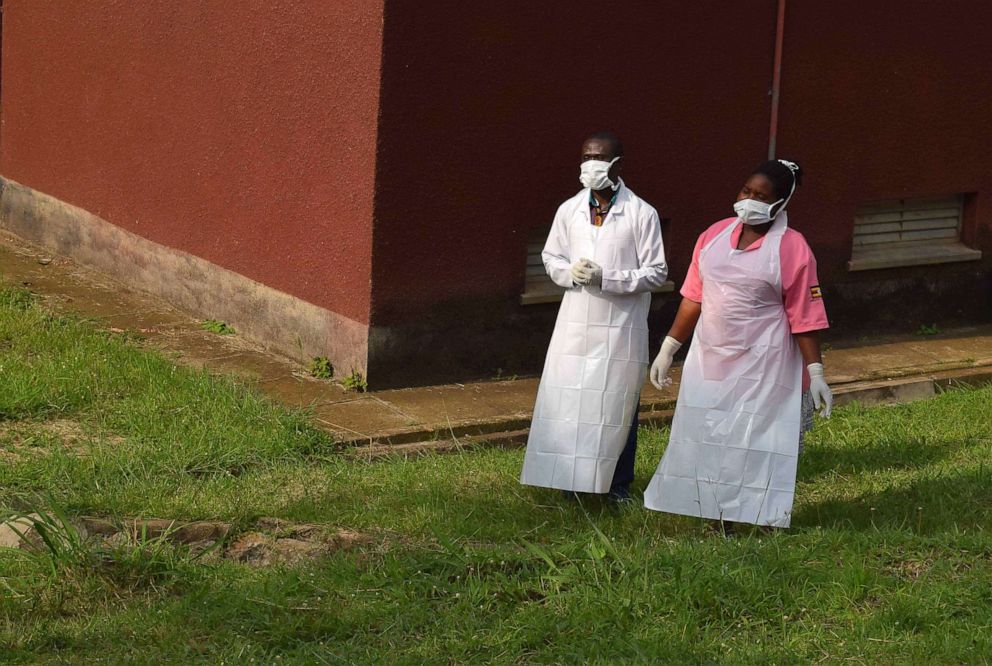 The child’s mother is Congolese and married to a Ugandan man. The family lives in the Kasese district of western Uganda, located near the border with the Democratic Republic of the Congo. The mother had traveled across the border last month with her family to take care of her ailing father, who died from Ebola on May 27, according to the Congolese health ministry.

On Monday, 14 members of this family arrived at a Congolese border crossing attempting to go to Uganda. A dozen of them appeared to have symptoms of Ebola and were transferred to an isolation center at a nearby Congolese hospital for observation, the health ministry said.

But six of the family members, including the 5-year-old boy, apparently got away somehow and crossed into Uganda on foot. Congolese health officials notified Ugandan authorities, who ultimately found the Ebola-stricken child and his family at Kagando Hospital in Uganda’s Kasese district, according to the Congolese health ministry.

The six remaining relatives in the Democratic Republic of the Congo were transferred to the Ebola treatment center in Beni on Tuesday, five of whom were subsequently diagnosed with the highly-contagious virus, the health ministry said.

A cross-border meeting between Congolese and Ugandan health officials was scheduled for Wednesday to discuss the possibility of transferring the other family members to the Democratic Republic of the Congo to continue their treatment in Beni.

The Ebola virus is transmitted through contact with blood or secretions from an infected person, either directly or through contaminated surfaces, needles or medical equipment. A patient is not contagious until they start showing signs of the disease. The virus is not airborne, which means a person cannot get the disease simply by breathing the same air as an infected patient. 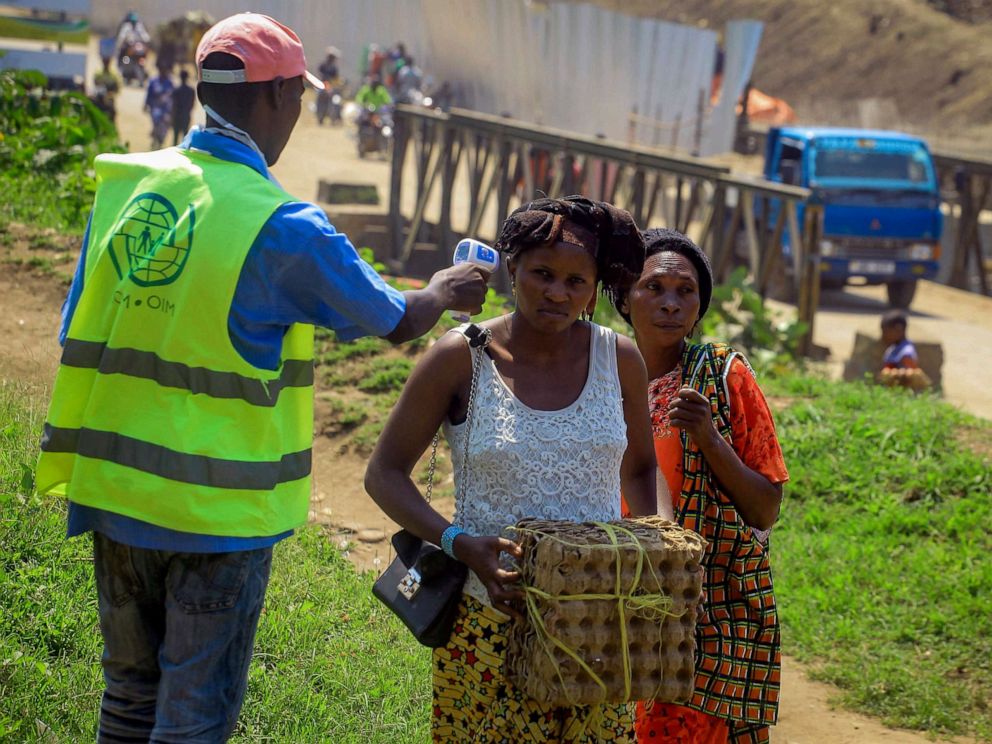 A total of 2,071 people have reported symptoms of hemorrhagic fever in the Democratic Republic of the Congo’s northeastern provinces of North Kivu and Ituri since ‪Aug. 1, 2018. Among those cases, 1,977 have tested positive for Ebola virus disease, which causes an often-fatal type of hemorrhagic fever, according to Tuesday night’s bulletin from the country’s health ministry.

A third of those who have fallen ill are children, which is a higher proportion than in previous Ebola epidemics, according to the World Health Organization.

The current outbreak has a case fatality rate of about 67 percent. There have been 1,396 deaths so far, including 1,302 people who died from confirmed cases of Ebola. The other deaths are from probable cases, according to the Congolese health ministry.

Since Aug. 8, more than 132,000 people have been vaccinated against Ebola in the outbreak zone in the Democratic Republic of the Congo, using an experimental vaccine developed by American pharmaceutical company Merck.

Nearly 4,700 health workers in 165 health facilities in Uganda were also immunized in preparation for a possible imported case during the current outbreak, according to the WHO. 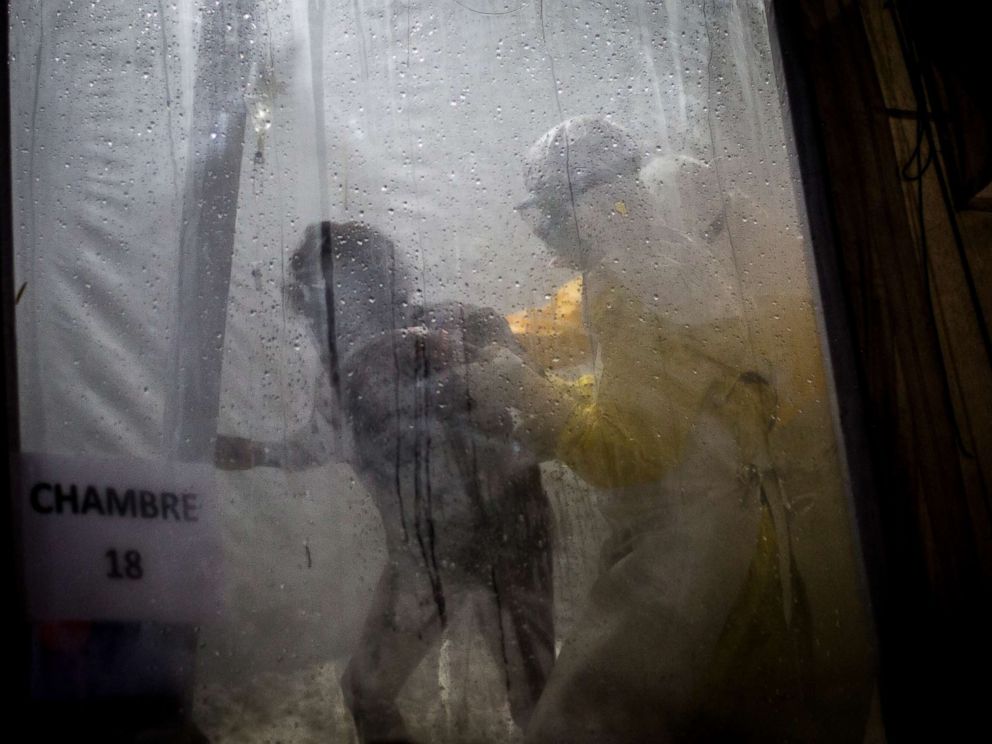 This is the 10th outbreak of Ebola virus disease in the Democratic Republic of the Congo and the most severe seen in the Central African nation since 1976, when scientists first identified the virus near the eponymous Ebola River. It’s also one of the worst outbreaks ever, second only to the 2014-2016 epidemic in multiple West African countries that infected 28,652 people and killed 11,325, according to data from the U.S. Centers for Disease Control and Prevention.

North Kivu and Ituri, the Congolese provinces where people have been infected, are rife with conflict and displacement. Health workers and other frontline personnel have been targeted in sporadic attacks from armed groups operating near the country’s volatile, mineral-rich border with Uganda. This is the first Ebola outbreak in history to occur in an active war zone.

Response teams in North Kivu and Ituri are also grappling with a population that’s very mobile and has never faced an Ebola outbreak before. A quarter of people interviewed in the cities of Beni and Butembo in North Kivu province during a survey last September said they didn’t believe the deadly virus was real, according to a study published in The Lancet Infectious Diseases journal in March.

The WHO has warned that the risk of regional spread remains “very high,” but has twice decided not to declare the current outbreak a public health emergency of international concern, as it did for the West African epidemic. The proclamation would mobilize more resources and command global attention.

WHO director-general Tedros Adhanom Ghebreyesus said that following the spread to Uganda, he will reconvene the emergency committee in Geneva on Friday to again ascertain whether the outbreak constitutes a public health emergency of international concern.