An Czech eco-zealot who caused chaos on the M25 by climbing onto a gantry as part of a Just Stop Oil protest has dodged jail.

The 50-year-old Quaker, who doesn’t live in the UK, was part of an army of climate change activists to cause pandemonium around London.

Springorum attended a 15-minute sentencing hearing at Westminster Magistrates’ Court on Thursday – after taking a 24-hour, 800-mile bus trip from Prague to London.

The protest last month was the second time the activist had brought the M25 to a standstill following a demonstration with Insulate Britain a year earlier. 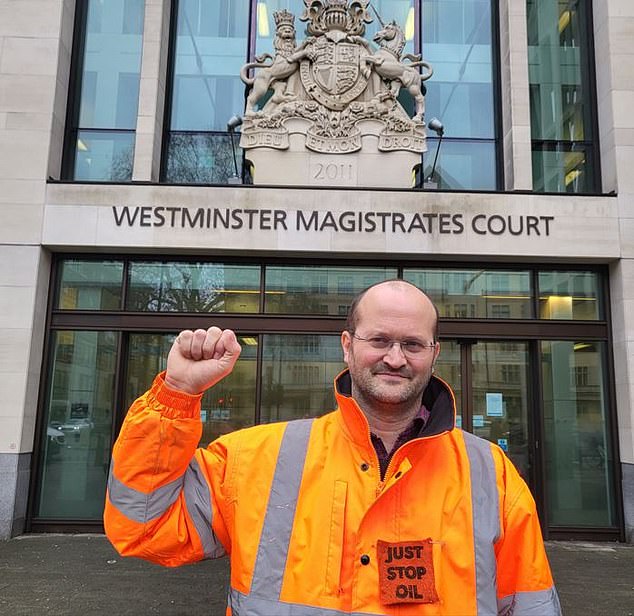 The eco-zealot from the Czech Republic walked free of court after being handed a six-month prison sentence, suspended for two years for closing the M25 for a second time in a year after a protest with Insulate Britain in 2021. He is pictured outside Westminster Magistrates’ Court 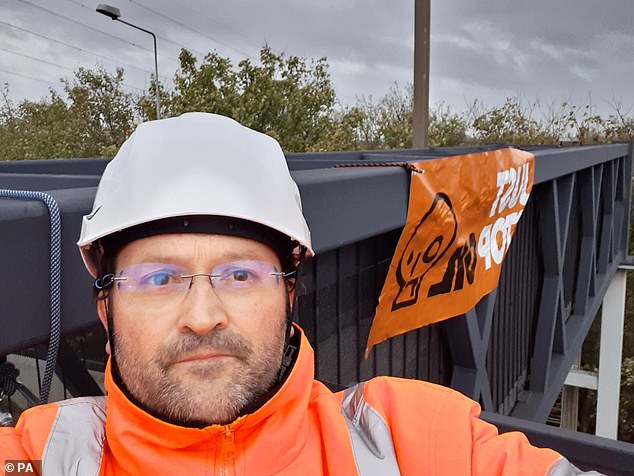 Geologist Arne Springorum helped shut the M25 near junction 13, Godstone, Surrey on November 7 after scaling the gantry above the highway, pictured

But the protestor was allowed to walk free of the court after being given a suspended sentence by magistrates. He had previously pleaded guilty during an earlier hearing, last month.

‘The police officers in this case say that around 7.30am they received reports of protestors climbing gantries, particularly one near junction 13.

‘The motorway was extremely busy at the time. The office went to see the protester who was attached to the gantry and it was this defendant. He held a banner with the words ‘Just Stop Oil”.’

Springorum risked distracting drivers during the protest and objects could have fallen from the gantry to the road below, the court heard.

The nearby slip road and all but two lanes of the motorway were closed by police for more than two hours.

Mr Bryan said: ‘At 10.30am, two hours later, there was an arrest and a protest removal team was called in and he was taken down from the gantry.

‘I think I’m right in saying that the M25 is the busiest motorway in the county and junction 13 is one of the busiest junctions of the motorway, so it caused considerable disruption and danger to motorists.’

The father-of-four, who holds both German and Czech citizenship, was sentenced to six months, suspended for two years. 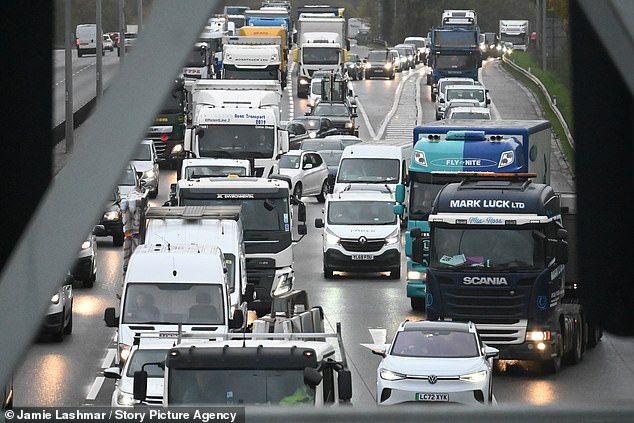 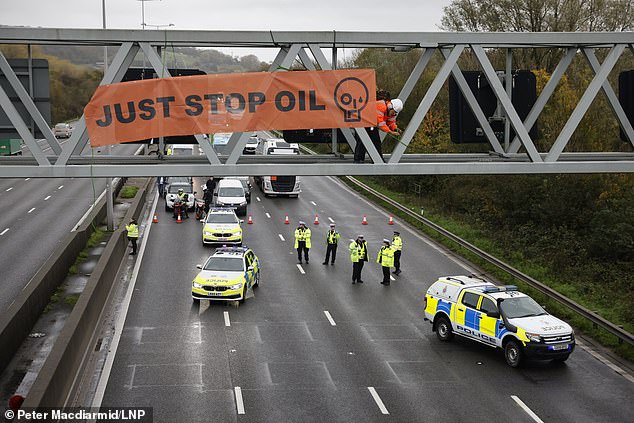 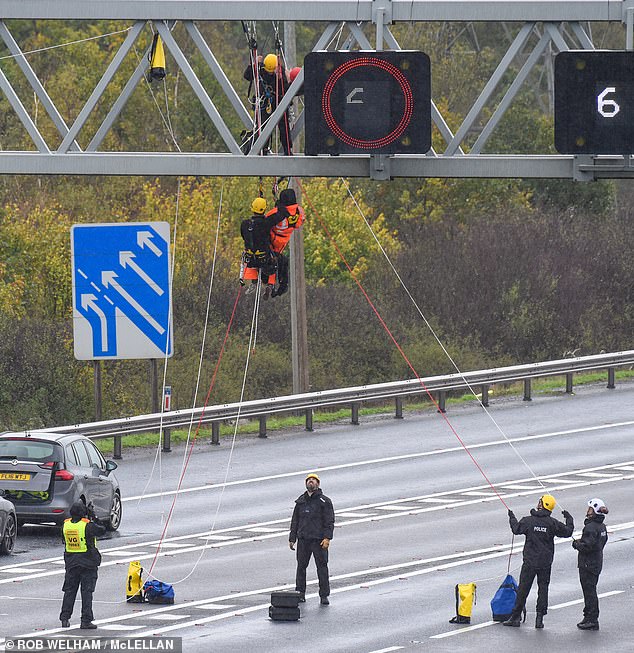 District Judge Joanna Evans told Springorum: ‘I accept entirely that this is a matter that you feel passionate about.

‘Climate change is a very live issue that the whole world must address, but you don’t need to give a 15-minute speech.’

When told to leave the dock, Springorum said: ‘I don’t understand the system, there are people going to jail. This is really important, I will respect this court, but I disagree with the way the court is dealing with it.’

Speaking outside court after pumping his fist and posing for photos, Springorum said: ‘I took all necessary precautions to prevent unnecessary harm to drivers and passengers in cars on the M25.

‘We had professional climbing training, we called the media and the police ahead and asked the public to avoid the M25, calculate extra time, asked the speed was reduced – all things were tethered by strings. There was no object on me that could have fallen.

‘I asked the police repeatedly not to climb up to me without climbing gear, to close down the remaining two open lanes.

‘My behaviour was not reckless, it was measured, deliberate and part of a well planned action designed to cause maximum disruption on the M25 while maintaining maximum safety for all people involved.’

Springorum said he feels ’empathy and regret’ for the people he disrupted.

But it is not the first time the Czech climate activist has found himself in court, however. 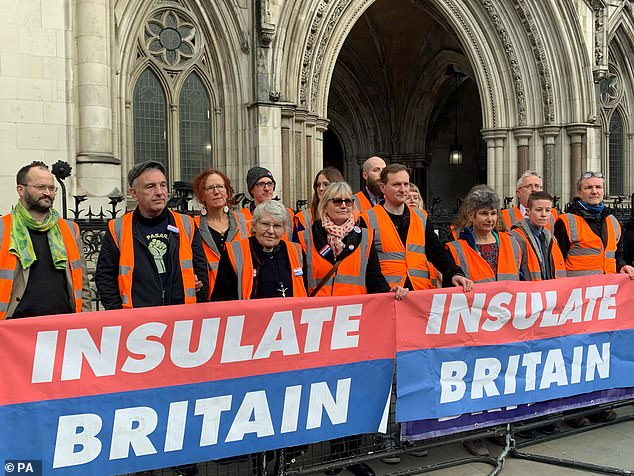 Insulate Britain protesters outside the Royal Courts of Justice in London earlier this year. Springorum is pictured far left 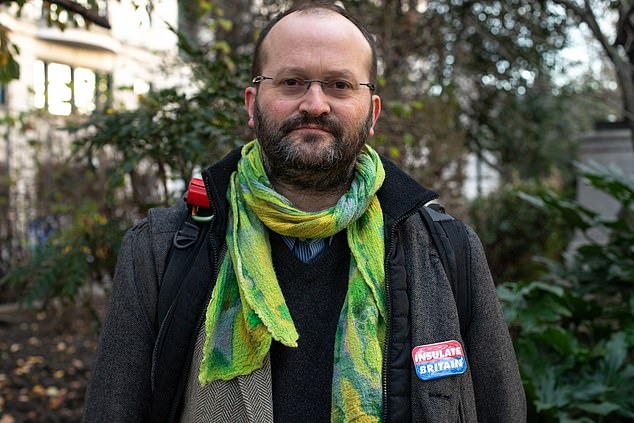 In February he was hauled in front of judges at the High Court after he joined an Insulate Britain protest on the M25, almost exactly a year before he clambered the motorway gantry for Just Stop Oil.

He was allowed to walk free from court on this occasion too after a judge ruled he and three other eco-mobsters had not breached an injunction during a demonstration at South Mimms roundabout by the M25 on November 2, 2021.

National Highways sought to bring contempt of court proceedings against Springorum, Liam Norton, 37, and Jessica Causby, 25, after they took part in a protest near the motorway.

According to National Highways’ written submissions, Mr Springorum and Ms Causby glued themselves to the pavement during their protest action, while Mr Norton allegedly ‘endangered the free flow of traffic’.

The demonstration was intended to block the M25 near Junction 23 at Bignells Corner, Potters Bar, but Lord Justice William Davis decided that area was not covered by the M25 injunction.

He said: ‘The application in their cases has been dismissed so there’s no further reference to them in these proceedings.’ The judge told the protesters that they were ‘free to go’.