Eight out of 10 supermarket chicken breasts show fatty white stripes that can increase fat content by 224 per cent, survey reveals

The birds have been bred to grow unnaturally fast, often in cramped sheds, with little opportunity or ability to move.

As a result, the normally lean breasts are becoming marbled with fatty white stripes, which run in parallel with the muscle fibres.

More than eight in ten packs of chicken breasts sold in leading supermarkets show evidence of the stripes, according to a new survey by animal welfare campaigners. 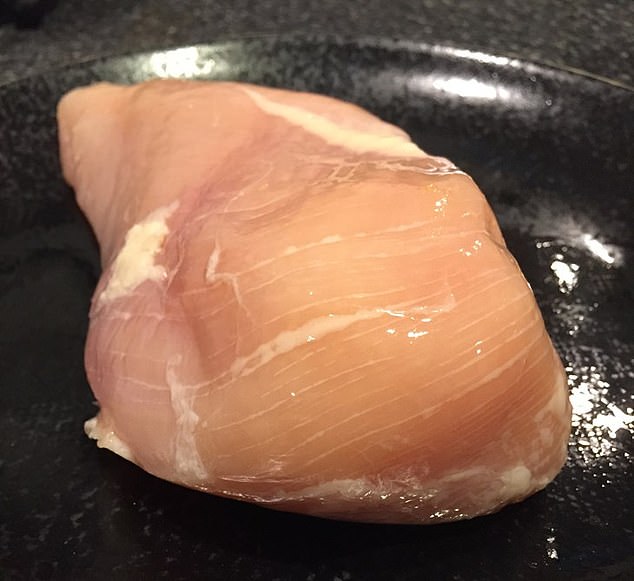 Normally lean breasts are becoming marbled with fatty white stripes, which run in parallel with the muscle fibres.

They say the stripes are evidence of factory farming, which leads to a miserable existence. And, for consumers, they say this affects the taste, texture and healthiness of the chicken.

Some studies have shown white striping can lead to a 224 per cent increase in fat content and a 9 per cent fall in protein – as well as reduced levels of nutritionally valuable amino acids.

An astonishing one billion chickens are produced in the UK every year. Most will grow from tiny yellow chicks to adult slaughter weight of approaching 2kg in just 35 days. This is around twice as fast as in the 1950s and puts enormous strain on their legs, bones, heart and lungs.

The rate of growth is so fast that their bodies struggle to cope and the birds have limited movement, creating the fatty deposits.

The survey of packs was carried out by The Humane League UK, which is calling on retailers to switch to slower growing chicken breeds under the Better Chicken Commitment (BCC). This scheme bans extreme breeding and is supported by a wide range of animal welfare groups, including the RSPCA and Compassion in World Farming.

Some household name companies, such as KFC, Marks & Spencer and Waitrose have already signed up, while others are under pressure to follow suit. 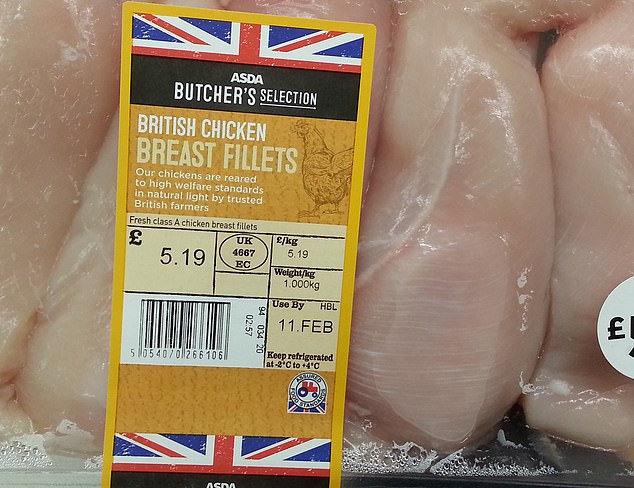 The survey found Aldi, Asda and Lidl were the worst offenders in a survey which measured white stripes on a scale of zero to three. The stripes appeared to be present in 94 per cent of Asda samples and 92per cent from both Aldi and Lidl.

The driving factor behind the issue is the desire for cheap chicken by supermarkets, restaurants and shoppers. And this could get worse under a trade deal with the USA, which opens Britain up to imports of chicken from farms across the Atlantic where welfare and rearing standards are less strict.

Managing Director at The Humane League UK, Vicky Bond, said: ‘Chicken is the most popular meat in the world, and people often choose it as it’s considered leaner and healthier. But with today’s factory farmed chicken, it’s not as healthy as it once was.

‘Add to that the severe animal welfare issues, and chicken is no longer looking like such an attractive choice.’

The survey found Aldi, Asda and Lidl were the worst offenders in a survey which measured white stripes on a scale of zero to three.

The stripes appeared to be present in 94 per cent of Asda samples and 92per cent from both Aldi and Lidl.

By comparison, only 11per cent of the samples of higher welfare chicken – including free-range and organic – showed any evidence of striping.

M&S became the first UK retailer to commit to the BCC in 2017, followed by Waitrose in 2019. In France, the majority of major supermarkets have committed to making the improvement.

Miss Bond said: ‘Next time people go to the supermarket, they should take a closer look at the chicken breasts on the shelf. I’ll bet it won’t take long to find several which are affected by white striping. It’s right there in front of our eyes, but there’s a lack of consumer awareness on the issue and that’s exactly how retailers want to keep it.’

Food Policy Advisor at the British Retail Consortium, which speaks for supermarkets, Elizabeth-Andoh Kesson, (correct) said: ‘Retailers expect their suppliers to adhere to all legal requirements and, if applicable, additional industry standards such as the Red Tractor assurance scheme.

‘They take their responsibilities to animal welfare very seriously and customers have a choice of free-range and organic chicken in addition to the standard range.’

The British Poultry Council, which represents producers, did not respond to requests for a comment.