Elon Musk has been named Time magazine’s 2021 Person of the Year.

The Tesla CEO saw his company’s market value soar to more than $1 trillion this year.

Mr Musk is also the founder and CEO of SpaceX and leads the brain-chip startup Neuralink and infrastructure firm The Boring Company.

This year he has overseen his electric car company become the most valuable carmaker in the world and his rocket company send an all-civilian crew to the edge of space. 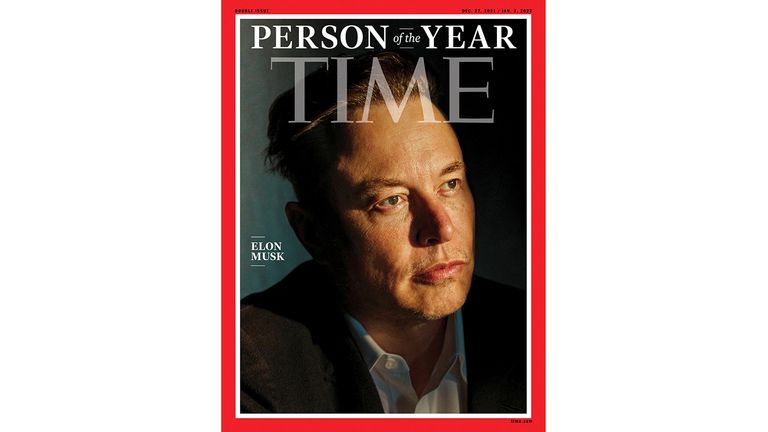 “For creating solutions to an existential crisis, for embodying the possibilities and the perils of the age of tech titans, for driving society’s most daring and disruptive transformations, Elon Musk is TIME’s 2021 Person of the Year,” the magazine’s editor-in-chief Edward Felsenthal said.

“Even Elon Musk’s spacefaring adventures are a direct line from the very first Person of the Year, Charles Lindbergh, whom the editors selected in 1927 to commemorate his historic first solo transatlantic airplane flight over the Atlantic.”

Musk has regularly featured in the headlines this year, from hosting Saturday Night Live to his tweets about cryptocurrencies and meme stocks to his 66 million followers on Twitter.

Time magazine said their Person of the Year is someone “who affected the news or our lives the most, for better, or worse.”

The magazine named teenage pop star Olivia Rodrigo its Entertainer of the Year, American gymnast Simone Biles Athlete of the Year and vaccine scientists were named as the magazine’s Heroes of the Year.