Taking Control: The Dominic Cummings Story, presented by Emily Maitlis, risked misleading viewers by taking quotes from a paper by his think-tank about migration out of context, the unit said.

The documentary reported from a paper titled ‘How Demographic Decline and its financial consequences will sink the European Dream’ published by Mr Cummings’ New Frontiers Foundation in 2005.

The extract included in the programme stated: ‘The consequences of economic stagnation coinciding with rising Muslim immigration cannot fill anyone familiar with European history with anything other than a sense of apprehension, at least, about the future of the Continent’.

According to the Editorial Complaints Unit (ECU), the quotation ‘tended to support the impression’ that Mr Cummings was prejudiced against Muslims.

Instead the ECU argued that the quotation from the think-tank paper ‘stood in a context which pointed to Europe’s relative difficulty in integrating immigrants, rather than anything connected with Islam, as the source of tension’.

The paper itself concluded that ‘there is little reason to be optimistic about Europe’s capacity to avoid a growth of extremist political activity, or its desire to avoid the traditional response of polities in crisis – blaming foreigners’.

In the ECU’s judgment, ‘the quotation would have conveyed a different impression in the programme if more had been done to reflect its original context’.

‘As this risked misleading viewers, there was a breach of the BBC’s standards of accuracy, and this aspect of the complaint was upheld,’ it added. 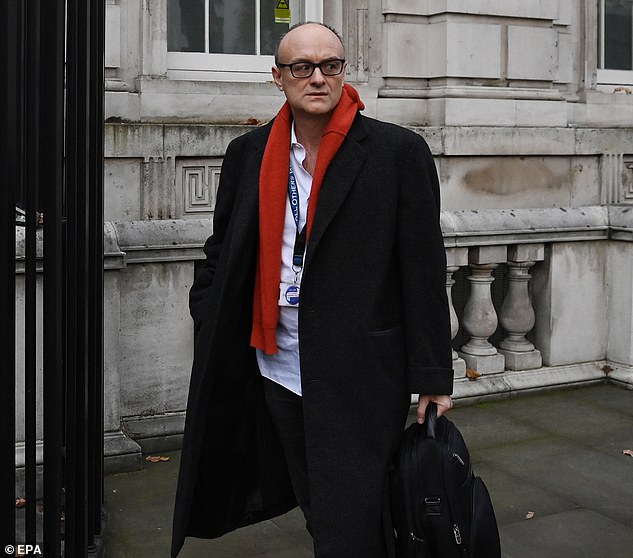 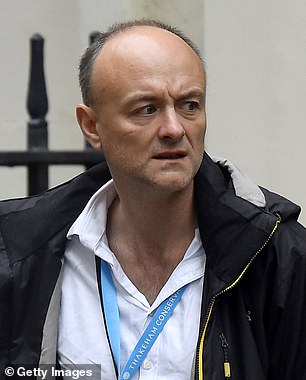 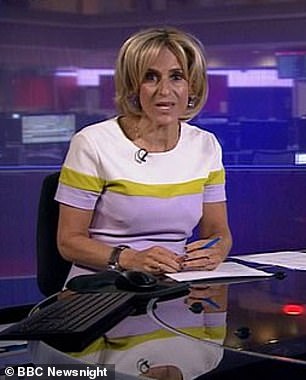 It is the second time this year an Emily Maitlis programme about Mr Cummings has been found in breach of the BBC’s editorial standards, after she reprimanded him for flouting lockdown

It is the second time this year a Maitlis-led programme about Mr Cummings has been found in breach of the BBC’s editorial standards, after she reprimanded the svenagli on Newsnight in May for flouting lockdown.

The BBC programme, first broadcast in March, was the corporation’s first in-depth look at the controversial architect of the Vote Leave campaign.

Featuring interviews with more than 20 people who have known Mr Cummings, it explored his meteoric rise to power from his origins as a strategist for the anti-Euro campaign in the 1990s to Westminster last year.

The BBC had received a complaint from a viewer that the programme gave the impression that Mr Cummings ‘was prepared to be recklessly violent towards political opponents; that he had ‘tribalist’ ‘neo fascist’ prejudice against Muslims; and that he was a liar who grossly misrepresented statistics in order to further his political aims’. 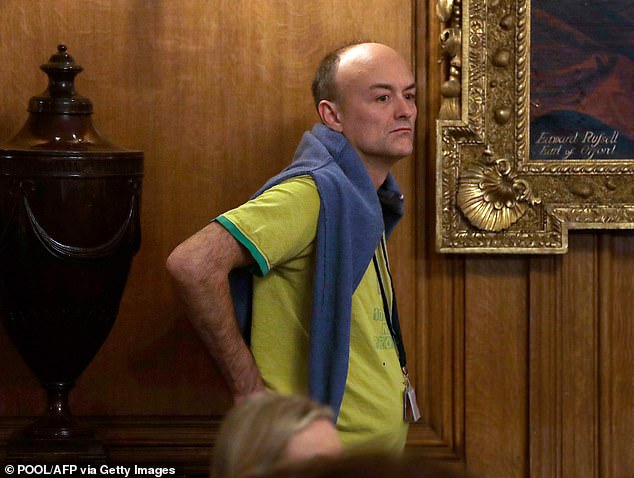 Taking Control: The Dominic Cummings Story, presented by Emily Maitlis, risked misleading viewers by taking quotes from a think-tank paper about migration out of context, the unit said 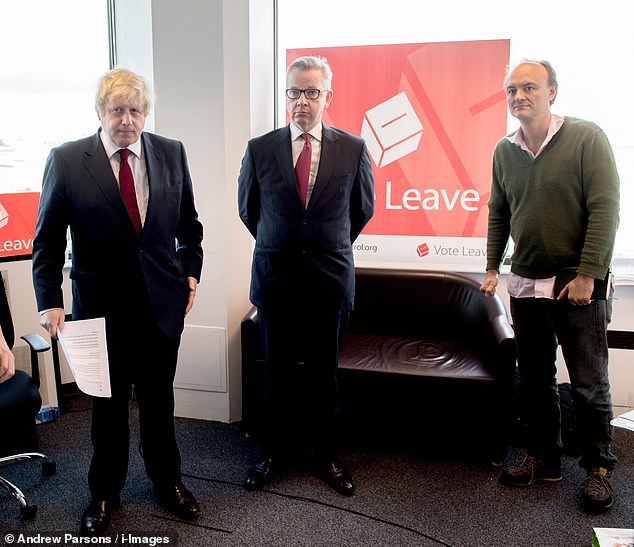 Ms Maitlis reprimanded Mr Cummings for flouting lockdown rules by driving from London to Durham and back.

She said the ex-chief aide had ‘broken the rules’ and ‘the country can see that, and it’s shocked the Government cannot’.

Ms Maitlis used Newsnight to hit out at claims that coronavirus is a ‘great leveller’ for society as she said the poorest Britons are less likely to survive the pandemic.

She claimed on BBC Two that those most at risk of catching the infection are in low-paid jobs such as bus drivers, nurses and care home workers.

BBC bosses found against Ms Maitlis after an internal investigation when viewers complained she was ‘sneering and bullying’ towards journalist Rod Liddle during a Brexit debate.

The executive complaints unit at the BBC determined that Ms Maitlis had been too ‘persistent and personal’ during the late night discussion on BBC2 on July 15.

The incident, where she told Mr Liddle to ‘get a grip’ and said his columns contained ‘casual racism’ left her open to claims she had ‘failed to be even-handed’, their report said.

Ms Maitlis said the BBC’s move to uphold a complaint against Naga Munchetty for calling out Donald Trump over racism looked ‘massively out of touch’.

She gave her full support to Munchetty, who had condemned the President’s call for four Democratic congresswomen to go back to their own countries.

The BBC criticised its own broadcaster Ms Maitlis about her performance in last week’s Conservative leadership debate.

A statement appeared on the BBC website saying that the Newsnight presenter was ‘not to everyone’s taste’. But the BBC quickly removed the comment, insisting it was a mistake.

The errant comment was a response to complaints about Maitlis’s performance in last week’s Conservative leadership debate.

Critics said the show turned into ‘an hour of men shouting inanely over each other’, while another said the BBC’s bar-stool format made the Tory MPs look like ‘a bunch of braying morons’.

The broadcaster is named as Newsnight’s new lead presenter and said: ‘I don’t have to be liked’.

She was caught on camera visibly losing her patience with Labour MP Barry Gardiner on Newsnight. The host is seen rolling her eyes and shuffling her papers as he spoke.

She urges male colleagues to join the gender pay gap fight – as women staff at the Corporation went into open revolt.

Ms Maitlis revealed she was once told by a boss at the Corporation she would have to appear on Strictly Come Dancing if she wanted to progress. She previously claimed it is harder for a woman to be taken seriously and be successful at the BBC.

The newscaster was spotted wearing a charity wristband in support of the Forces charity Help for Heroes while presenting the news – despite there being a ban on presenters wearing such accessories.

Dr David Starkey called her a ‘disgrace’ after he claimed that Britain had undergone a cultural shift and ‘the whites have become black’ during an interview with Ms Maitlis.

Ms Maitlis is named among a host of the BBC’s highest-paid presenters classing themselves as freelancers to avoid paying 50 per cent  income tax.

The reference to Mr Cummings as ‘prepared to be recklessly violent towards political opponents’ related to claims made by Colin Perry, formerly of the CBI, that after they had taken part in a radio debate in 1999 Mr Cummings had attempted to push him downstairs and had pinned him to a wall with a raised fist.

A formal complaint was made against him following the incident, but Mr Cummings kept his job at the anti-Euro campaign.

Mr Cummings hasn’t responded to the BBC’s request for comment but claimed at the time that the two men had simply ‘stumbled into each other’.

As the particulars of the incident were known only to the protagonists, the ECU took the view that the programme had done enough to observe due accuracy and impartiality here, and this aspect of the complaint was not upheld.

The complaint that the programme represented Mr Cummings as ‘a liar who grossly misrepresented statistics in order to further his political aims’ related to a section of the programme which discussed his work for Business for Sterling.

In this section, the documentary made clear that Business for Sterling relied on a survey which put the cost of joining the euro at more than £34billion, whereas another estimate, by a consultancy firm, put it at less than £12billion, and that Mr Cummings had had the idea of making a comparison with the cost of the NHS.

The ECU found the programme also made clear that Business for Sterling’s figures, in relation to both the euro and the NHS, were ‘strongly contested’ by critics, but this was no more than a statement of fact, and the programme offered no view on which figures were closer to the truth.

In the ECU’s judgment: ‘This section of the programme did not give the impression complained of, and this aspect of the complaint was not upheld.’

The ECU ruling was published on the BBC website on Christmas Eve, and discussed its findings with the programme-makers. No staff have been subject to a disciplinary action.

The documentary is no longer available on iPlayer and will not be coming back.

A BBC spokesperson told MailOnline: ‘We note the findings of the ECU’s partially upheld complaint in relation to accuracy and also note that complaints regarding impartiality were not upheld.’

It is the second time this year that Maitlis has come under fire for breaching the BBC’s impartiality standards.

She  used her opening address on an episode of Newsnight to state Mr Cummings, then Mr Johnson’s chief adviser, had ‘broken the rules’ and ‘the country can see that, and it’s shocked the Government cannot’.

In September, the ECU said the loaded rant did breach strict rules governing impartiality and accuracy.

However, following the verdict the ECU said the matter was closed and that it would not be taking any further action for the breach.

Broadcasting watchdog Ofcom has since received a complaint from an individual not satisfied with the BBC process.

More than 20 interviewees spoke to the programme about their experiences of the man who is said to have ‘masterminded’ Brexit, civil service reform and the Tory electoral win last year.

Mr Gauke said: ‘Greg Clark got a call from Dominic Cummings and was told in no uncertain terms, ‘you effing people need to learn that this is what we’re doing.’

‘Quite a few people sort of said well if that’s going to be the way you want to play it, I’m not going to be intimidated.’

Political strategist and former CEO of Vote Leave Matthew Elliott said: ‘It didn’t surprise me that Boris turned to him.

‘He can do the market research, he can do the comms like Alastair Campbell could, he can organise things based on his time at the Department for Education, so really his skill set spans all the different areas you need to run an effective machine.’

Former Tory MEP Lord Hannan said of Mr Cummings: ‘When it comes to understanding how the state is failing he is absolutely the best guy in the business.’

‘No half measures, no going so far and then stopping, it’s all the way. That is both the magic and the richness of the man as well as his horror.’