India’s ‘twin towers’ collapse in five seconds: Moment engineers detonate controlled blast beneath skyscrapers after court deemed them structurally unsafe and said they must come down

This is the dramatic moment India’s ‘twin towers’ were brought down in a seconds-long explosion after the country’s highest court ruled they were too unsafe to stay up.

The Supertech complex in Noida, Uttar Pradesh in northern India collapsed after a loud blast caused by 3,700kg of explosives wired into the structure, sending a cloud of smoke and dust high above the so-called ‘twin towers’.

Supertech’s 5,000 residents had been evacuated amid safety fears, with the explosion leaving an incredible 80,000 tonnes of debris.

Arrangements have been made for steel and concrete to be separated on-site, after which 21,000 cubic metres of the debris will be moved to the outskirts of the city in over 1000 lorries, according to Noida Authority’s Planning Manager, Ishtiaq Ahmed.

The remaining waste will be stored in the basements of the two towers, which will later be sold to recover costs.

British engineers from Derbyshire-based environment consultants Vibrock estimated vibrations from the explosion were significant, leading to a reading of four on the Ritcher scale.

Present in a seismic zone, the twin towers fell after a prolonged public campaign against its illegal construction. 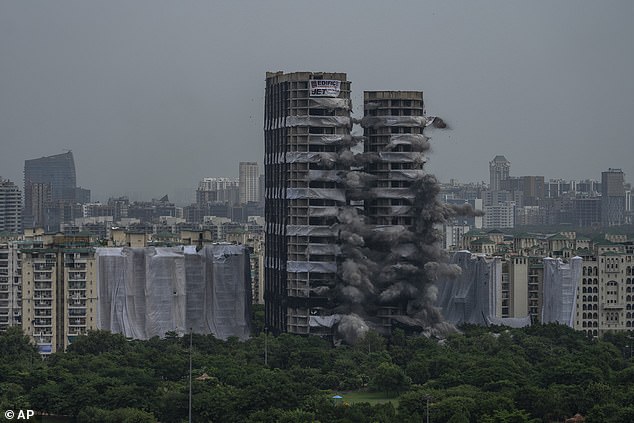 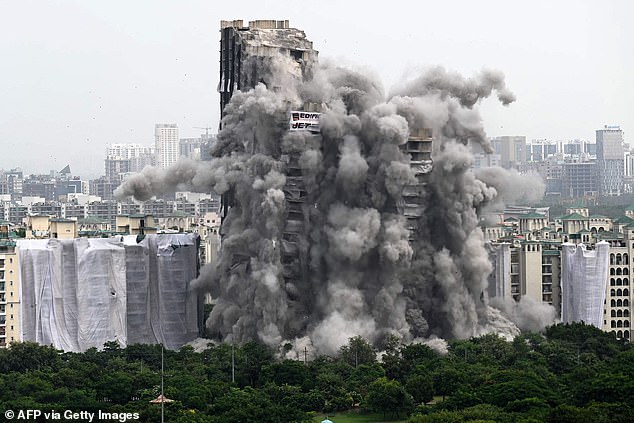 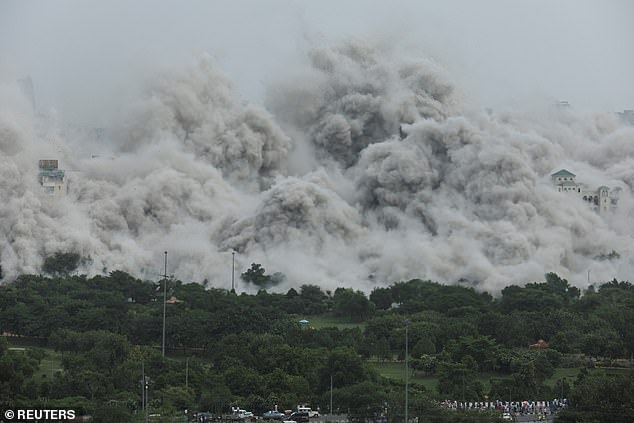 The operation saw 5,000 residents and their pets evacuated shortly before the demolition

Evacuated residents from the neighbourhood, who left with their vehicles and pets, will only be allowed to return in the evening once the dust has settled.

Medical personnel were present in the vicinity to deal with emergencies, while a nearby hospital reserved over 50 beds as part of a contingency plan.

The entire operation was carried out at a cost of £2million.

The structure consisted of two towers ‘Ceyane’ and ‘Apex’ that were being marketed as a luxury living housing community.

The 915 flats were expected to net builders over £127million after sales.

The scale of this action is unprecedented in India but comes two years after a high-end apartment block on Kerala’s coast, the Holy Faith H2O building was blasted to the ground in just five seconds after it was found to have been built in violation of norms.