A former member of the Islamic State group has been convicted of being involved in genocide and crimes against humanity, including the murder of a five-year-old Yazidi girl he bought as a slave and then chained to a window as he left her to die in scorching heat.

The defendant, an Iraqi man named only as Taha al J, who was arrested in Greece and extradited to Germany two years ago, was sentenced to life in prison by a court in Frankfurt.

It is believed to be first time a person has been found guilty of genocide over the persecution of the Yazidi religious minority by IS.

In the landmark ruling, he was convicted of involvement in the killing of more than 3,000 Yazidis and the enslavement of 7,000 women and girls by IS jihadists in 2014-15.

This, the court ruled, included the murder of a five-year-old girl the defendant had enslaved and chained to a window, leaving her to die in blistering heat in 2015 in Iraq. 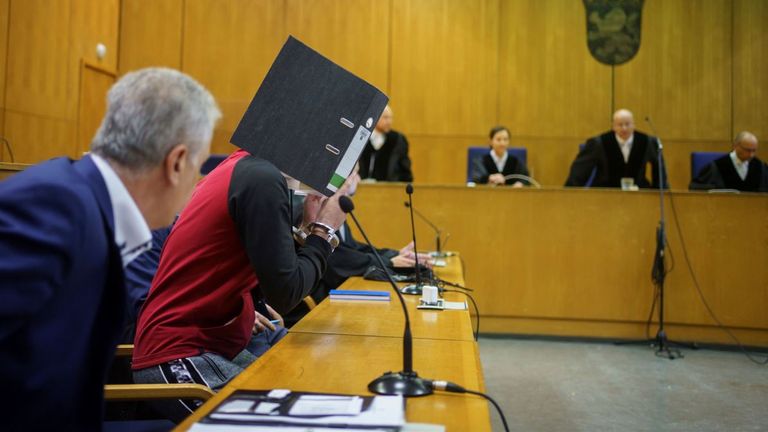 Al J, who is aged 29, bought a Yazidi woman and her five-year-old daughter Reda as slaves at an IS base in Syria in 2015, according to German prosecutors.

The pair had been taken as prisoners by the militants from the northern Iraqi town of Kocho at the beginning of August 2014 and had already been “sold and resold several times as slaves” by the extremist group.

The defendant took the woman and her daughter to his Fallujah home in Iraq and forced them to “keep house and to live according to strict Islamic rules,” while giving them little food and beating them often as punishment, prosecutors said.

They alleged that near the end of 2015, al J chained the girl to the bars of a window in the open sun where the temperature hit 50C (122F) and she lost her life.

The girl had allegedly been punished by the man because she had wet the bed.

The defendant’s lawyers denied the accusations against their client, who was ordered by the Frankfurt regional court to pay the girl’s mother €50,000 (£42,500).

Last month, his German wife, identified only as Jennifer W, was sentenced to 10 years in jail over the girl’s death.

The child’s mother, who survived captivity, testified at both trials and was a co-plaintiff.

Lawyer Amal Clooney, who was a counsel for the mother, said after Tuesday’s verdict: “This is the moment Yazidis have been waiting for.

“To finally hear a judge, after seven years, declare that what they suffered was genocide. To watch a man face justice for killing a Yazidi girl – because she was Yazidi.”

The Yazidis are an ancient religious minority in eastern Syria and northwest Iraq that IS saw as supposed devil worshippers for their faith that combines Zoroastrian, Christian, Manichean, Jewish and Muslim beliefs.

The United Nations described the IS assault on the Yazidis’ ancestral homeland in northern Iraq in 2014 as a genocide, claiming their 400,000-strong community “had all been displaced, captured or killed”.

Of the thousands captured by IS, boys had to fight for the militants, men were executed if they did not convert to Islam – and even if they did they were often murdered – and women and girls were sold as slaves.

German authorities handled the case under the principle of universal jurisdiction, where the country can try very serious crimes even if they happened elsewhere and there was no direct link to Germany.

Nobel peace prize laureate Nadia Murad, who has survived IS atrocities, called the verdict “a win for survivors of genocide, survivors of sexual violence, and the entire Yazidi community”.