Royal Navy officer is stripped of his MBE after he was jailed for forging his wife’s signature to steal £60,000 inheritance from stepson with learning difficulties 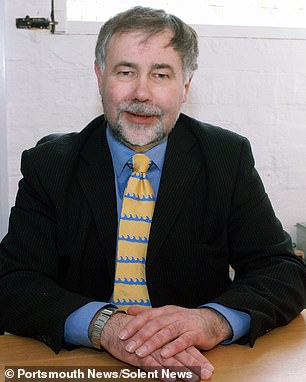 Lieutenant Commander Iain Shepherd (pictured above), 66, had his honour revoked after being jailed for fraud last year

A Royal Navy officer has been stripped of his MBE after he was jailed for forging his wife’s signature to steal almost £60,000 inheritance from his stepson with learning difficulties.

Lieutenant Commander Iain Shepherd, who advised the European Commission on the continent’s maritime strategy, had his honour revoked after being sentenced to prison for fraud last year.

The 66-year-old retired officer had received the honour from Prince William during a prestigious ceremony at Buckingham Palace in 2015.

But a notice in official public record The Gazette announced the Queen had approved the decision for the Falkland veteran to have his honour ‘cancelled and annulled’ and his name ‘erased from the register’.

His former wife Mary Shepherd, of Chichester, West Sussex, had campaigned for the disgraced officer to be stripped of the award.

Reacting to the Queen’s decision, she said: ‘I’m absolutely delighted his MBE has been taken away. He should never have been awarded it because he was an undeclared bankrupt, a liar and a cheat.’

Shepherd was convicted at Portsmouth Crown Court for siphoning £58,895 from his stepson Joshua Powell’s inheritance.

The ‘devious’ scheme first began in December 2006 when Joshua, who has learning disabilities, was aged just 10.

Shepherd, of Bognor Regis, West Sussex, had been bankrupt when he took charge of Joshua’s money, which amounted to £83,255. 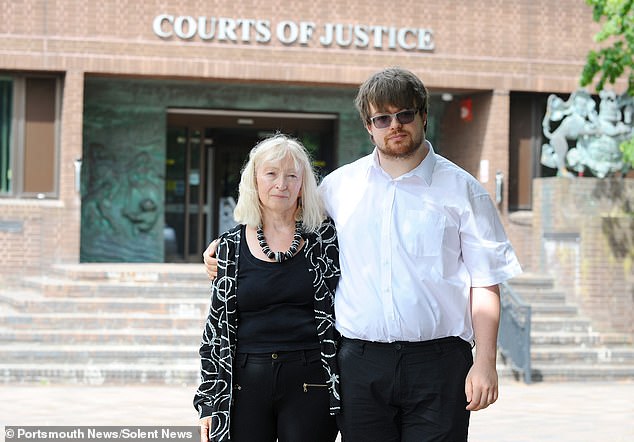 Mary Shepherd with her son Joshua Powell outside Portsmouth Crown Court. Shepherd was convicted for siphoning £58,895 from his stepson Joshua’s inheritance 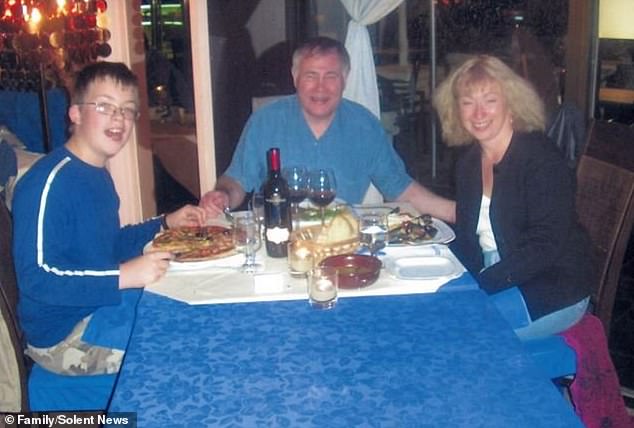 Shepherd (pictured centre), of Bognor Regis, West Sussex, with his stepson Joshua and Joshua’s mother Mary Shepherd. He pocketed the inheritance over a period of three years

The fraudster forged his wife’s signature to set up a secret bank account in a desperate bid to secure cash.

Over a period of three years, Shepherd pocketed Joshua’s inheritance, which he was given after the death of his father, Stephen Powell, who was a ‘close friend’ of Shepherd’s in the navy, in 2004.

The sailor’s scam was only exposed a decade later, in 2017, by Mrs Shepherd, after she became suspicious.

Joshua, a paleontology graduate, had hoped to use the cash from his late father to pay off his student debt, fund his ADHD medication and complete building work at his mother’s home in Chichester, West Sussex.

The veteran, who was in the navy for 21 years, pleaded guilty to fraud during a hearing at Portsmouth Crown Court last year.

Speaking just after Shepherd was jailed, his ex-wife had said: ‘He is absolutely despicable. What he has done is beyond words.’

Shepherd is currently serving his jail sentence of three years and eight months at Ford Open Prison, in West Sussex.

Who has been stripped of their British honours?

Anthony Blunt (1979): The leading British art historian was stripped of his knighthood after confessing to spying for the Soviet Union and being exposed by Margaret Thatcher.

Naseem Hamed (2007): The professional boxer was stripped of his MBE after being jailed for 15 months in 2006 for dangerous driving.

Robert Mugabe (2008): The Queen took away the Zimbabwean President’s honorary knighthood over his ‘abject disregard’ for democracy and ‘abuse of human rights’.

Jean Else (2011): The educator’s Damehood was revoked after she was banned from being head of a school following a misconduct hearing in 2009.

Fred Goodwin (2012): The ex-boss of the Royal Bank Scotland had his knighthood removed after the company’s near-collapse in 2008.

Vicky Pryce (2013): The economist’s name was taken off the Order of the Bath register after she was jailed for taking speeding points for her ex-husband.

James Crosby (2013): The former chief executive of HBOS asked to have his knighthood taken away after being described as the ‘architect’ of a strategy which led to HBOS’ downfall.

George Castledine (2014): The nursing professor’s knighthood was ‘cancelled and annulled’ after he was found guilty of ‘sexually and financially motivated’ misconduct.

Alan Davies (2014): The former head teacher of a school in London had his knighthood revoked after he pleaded guilty to six counts of false accounting and was given a suspended jail term.

Rolf Harris (2015): The entertainer was stripped of his CBE after he was jailed for 12 indecent assaults on four girls between 1968 and 1986.