A high pressure system will dome over much of the UK by the end of next week, sending temperatures back into the mid 20s for some parts of England. WX Charts forecasts that by Friday, September 23, the mercury will be sitting at 24C in Cambridgeshire, a place where thermometers often skyrocket amid warm weather. Nearer the south east coast a sea breeze will bring the mercury down at least three degrees. The steady incline will come after a colder weekend across Britain due to a low pressure system taking hold.

Jim Dale, senior meteorologist at British Weather Services said he felt temperatures would start to heat up from next Wednesday.

Speaking to Express.co.uk, he said: “It’s a steady climb from some rather cold weather this weekend. Bit by bit up during the course of next week with high pressure moving in.

“As far as the warmth is concerned (not hot) I’d expect Wednesday, September 21 to be the warmest at 20 to 21C in the south and east.”

This is in addition to September 23 – where maps suggest the mercury could intensify some more. 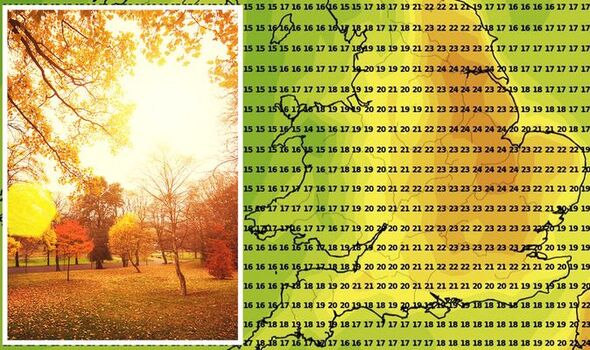 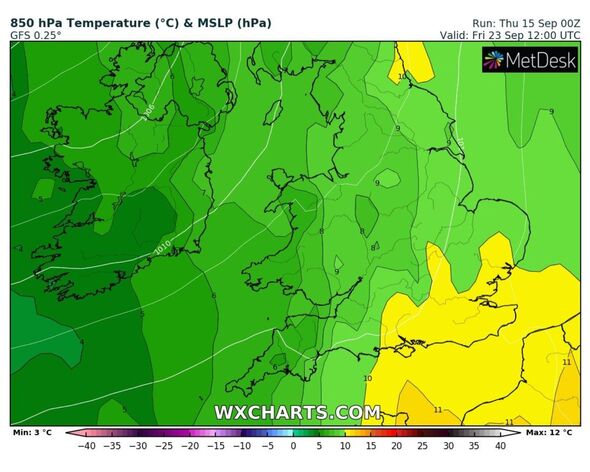 And the maps show that another band of hot air could come across the UK before the month is out.

By Wednesday, September 28 the south, east and midlands looks to be blanketed by dominant high pressure which appears to be more concentrated inland.

While this has the potential to indicate a second warmer spike – it’s worth noting that storm maps show intense thunder and lightning over Scotland and the north just the day before, which goes hand-in-hand with the Met Office’s prediction of a more unsettled October.

Both the storm on September 27 and the heat spike on September 28 look to be shortlived, with the weather stabilising again by the early hours of September 30. 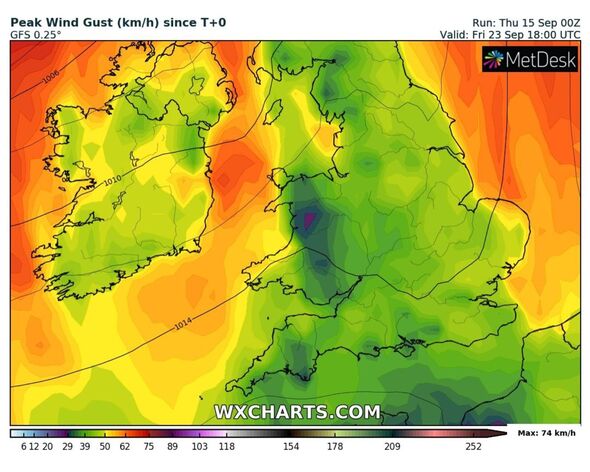 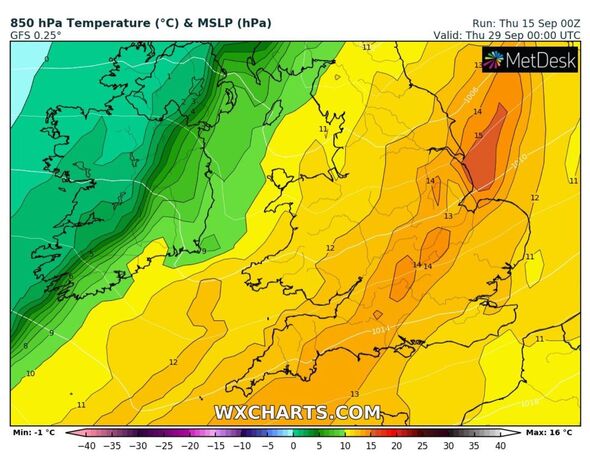 The top temperatures towards the end of the month are currently sitting at around 18C to 20C. The Met Office long range forecast for up until September 28 says: “Fine and dry for most with sunny spells at the start of this period, though perhaps cloudier in the east and parts of the northwest, where occasional showers and a few spots of rain are possible respectively.

“Winds generally light but still a little fresher along some eastern coasts. Temperatures rather cool initially but should return closer to average through the week.

“Mid-week, a band of thicker cloud and light rain may spread across northern and northwestern parts and then possibly edge slowly southeastwards, weakening as it does so.

“Wetter and windier conditions are likely at times in the northwest for the remainder of the period whilst the southeast sees more in the way of dry weather. Overnight mist and fog patches possible throughout but these should clear quickly.”

Looking ahead to October, the Met Office cites a divide in the country, caused by differing weather fronts, but temperatures will remain above average for the time of year.

It adds: “We are likely to continue seeing a northwest/southeast split through the end of September and into October.

“Temperatures generally above average for this period.”