A cloud of smoke was filmed billowing into the air as a terrorist bomb killed two cops at a Colombian airport – moments after another bomber accidentally blew himself up.

Norte de Santander officers David Reyes and Willian Bareño were responding to the initial explosion that killed one of the attackers at Camilo Daza International Airport in the border city of Cucutá and approached a suitcase before it exploded.

Defense Minister Diego Molano said the blasts were caused by ‘terrorist’ groups that operate in the city of half a million people, which is located on the border with Venezuela and is a hub for commerce and migration.

Drug and guerilla gangs are currently at war in the city over control of cocoa crops and drug trafficking routes, with attacks such as the airport blast a semi-regular occurrence for residents of the area.

Cucutá mayor Jairo Yáñez was awaiting to board a 5:15 a.m. flight to the Colombian capital city of Bogotá when the first bomb exploded at 15 minutes earlier as man carrying explosives tried to climb over a fence that separates the airport’s runway from one of the city’s neighborhoods.

The bomber, who has not been identified by authorities, died instantly in the blast. 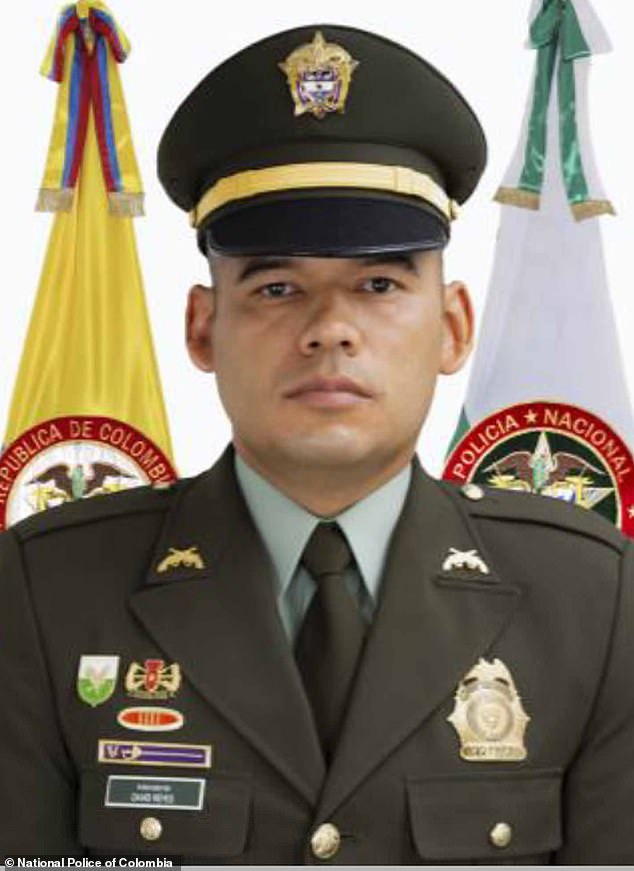 David Reyes (pictured) was one of the two police officers killed in Cucutá, Colombia, on Tuesday morning when a package he and his partner Willian Bareño encountered exploded near a tarmac at Camilo Daza International Airport. Bareño also died 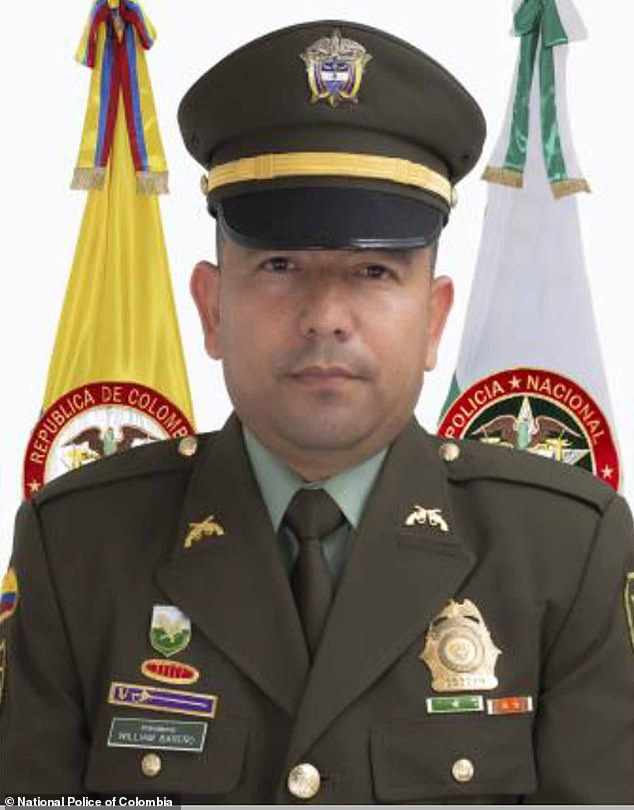 Willian Bareño (pictured) was a member of the Cucutá police department’s anti-explosives squad. Bareño and his partner David Reyes were both killed Tuesday at Camilo Daza International Airport while searching for explosives one hour after a man died when the explosives he was carrying were set off as he tried to climb over a fence that separates the airport’s runway from one of the city’s neighborhoods 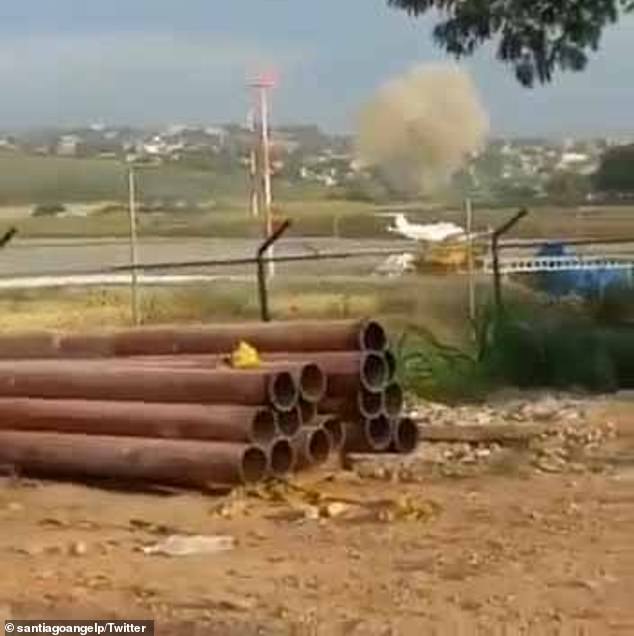 Two other men, who remain at large, left a suitcase filled with explosives on a grass area adjacent to the tarmac and exploded about an hour later as Reyes and Bareño, both members of the police department’s anti-explosives squad, were combing the area for additional explosives.

A resident outside the airport was filming as a military helicopter hovered over the tarmac before the package exploded and killed the cops.

Though the explosions took place near Camilo Daza International Airport’s runway, the passenger terminal was not affected. But flights were suspended and passengers were evacuated from the building.

‘They will not (make) us bend with these events that only seek to destabilize us and generate terror,’ Yáñez said. 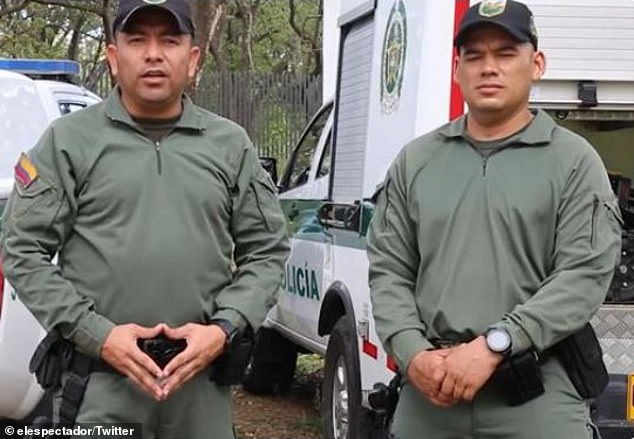 Police officers Willian Bareño (left) and David Reyes (right) were killed when a suitcase loaded with explosives exploded near a tarmac at Camilo Daza International Airport in Cucutá, Colombia, on Tuesday morning. The cops were searching the area for additional bombs after a suspect was killed when the explosive he was carrying was detonated as he attempted to climb over a fence separating the airport perimeter from a street 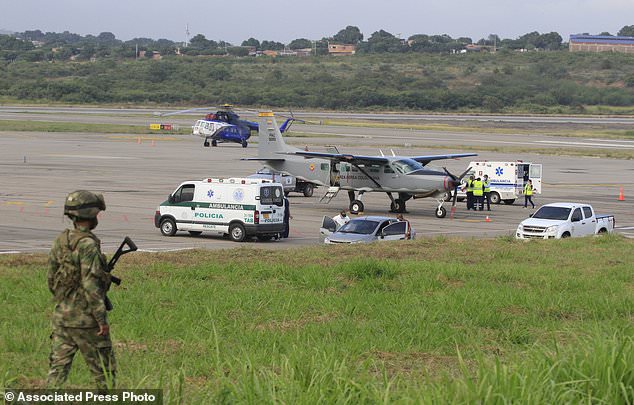 A soldier patrols near the runway of Camilo Daza International Airport airport in Cucutá Colombia, where an explosion occurred near the airport’s perimeter fence Tuesday 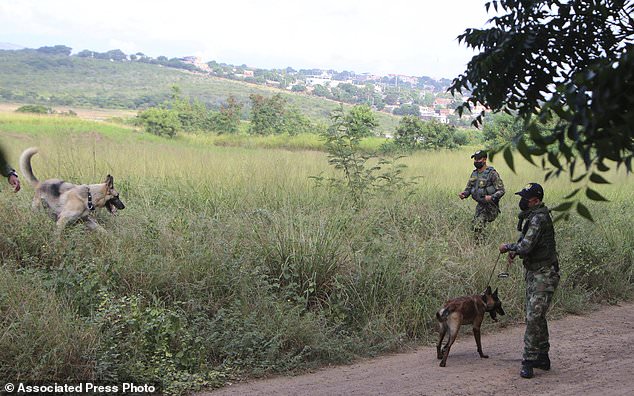 Cucutá is the capital of Norte de Santander, a border region that has recently seen a surge in fighting between guerrilla groups and drug trafficking gangs that are vying for control of cocoa crops and trafficking routes.

In June, a car bomb was set off at a military base in the outskirts of the city, where U.S. military advisers were working.

Then in August a bomb was set off outside a police station, injuring 14 people.

President Ivan Duque’s helicopter was also shot at during a recent visit to the city. The president emerged unharmed from the attack.

Armed organizations operating in Norte de Santander include the National Liberation Army guerrilla group, and dissident groups formed by former members of the Revolutionary Armed Forces of Colombia who refused to sign a 2016 peace deal with Colombia’s government.