The FBI is investigating an explosion and vandalism early Saturday at a Southern California church that has drawn protests over its controversial pastor and his anti-LGBTQ views.

A fire and explosion were reported shortly after 1 a.m. at First Works Baptist Church in El Monte, about 13 miles east of Los Angeles. Police responding to the scene saw smoke billowing from windows blown out from the blast and graffiti sprayed on the outside of the single-story brick building.

No injuries were reported, city officials said in a press release.

The FBI referred to the explosion as an “IED attack.”

Fourteen homes and eight apartments in the area were temporarily evacuated, as bomb technicians investigated. All residents had returned to their homes by 8 a.m.

Authorities did not immediately announce a motive, but protesters have repeatedly targeted the church headed by Pastor Bruce Mejia, who has condemned same-sex relationships. So far, there have been no arrests. 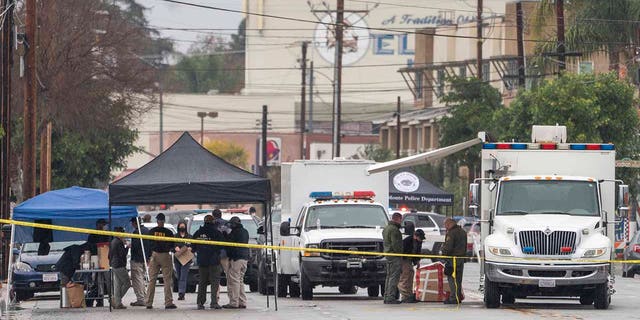 A command post is seen outside the First Works Baptist Church after an explosion in El Monte, Calif., Saturday, Jan. 23, 2021. The FBI and local police are investigating an explosion early Saturday at the Los Angeles-area church that had been the target of protests for its anti-LGTBQ message. (AP Photo/Damian Dovarganes)

“As to the question of whether this was a hate crime, that’s always going to be considered among the theories when a house of worship is attacked,” FBI Los Angeles spokeswoman Laura Eimiller said in a statement provided to the San Gabriel Valley Tribune. “But it would be premature to confirm any motive at this time, and we are not ruling any other motive out.”

The Southern Poverty Law Center, a nonprofit advocacy group that tracks hate groups, placed the church on its watch list of “anti-LBGTQ hate groups” in 2019.

A statement on the church website declares: “We believe that homosexuality is a sin and an abomination which God punishes with the death penalty.”

The church did not immediately return a Fox News request for comment Sunday.

In an interview with The New York Times Saturday, Mejia said the attack is “not going to really deter us from doing what we always do.”

El Monte Police Chief David Reynoso met with Mejia on Jan. 7, advising him not to react to critics or instigate violence.  Residents who spoke at a recent city council meeting described Mejia’s sermons and the church’s stances as hate speech.

Following Saturday’s attack, Keep El Monte Friendly, a group that has been organizing protests against the church, said in a statement on Instagram that their group “is rooted in love” and does “not condone or promote violence.” The post directed anyone with information to contact the FBI Los Angeles Field Office at (310) 477-6565.

An online petition started by Keep El Monte Friendly calling for the church to be kicked out of the city had more than 14,000 signatures as of Saturday morning, according to the Associated Press.

Los Angeles County Supervisor Hilda Solis, who represents the district where the church is located, condemned the IED attack in a statement, vowing that “violence is never the answer, even in response to hate speech.”

She said her office referred concers about the pastor’s “anti-LGBTQ+ and misogynistic sermons” to Los Angeles County’s Human Rights Commission, which has been working with the city of El Monte to “de-escalate the situation.”

“I value inclusivity, diversity and equality. I also support the right to peacefully protest; however, this attack is wrong and it is dangerous,” Solis wrote. “I urge city leaders, church leaders, and civic leaders to come together and work together to address hate issues in our community.”

“As your mayor, I will always ensure that the City of El Monte continues to be an example for civility, respect, and inclusion of all people across the nation,” Ancona said in a statement on Twitter. “We are a city that cares and protects all its residents and visitors.  We respect and uphold the laws that protect each one of us, regardless of who we are. At this very moment we must stand together to uplift one another in affirming the City of El Monte’s slogan, ‘Welcome to Friendly El Monte.'”