A five-year-old boy was among 30 to be rescued after an 85-year-old rollercoaster broke down at a popular tourist hotspot.

Staff at the popular attraction had to climb up the ride, which stands 62ft high, to escort nervous adrenaline junkies back to the ground. 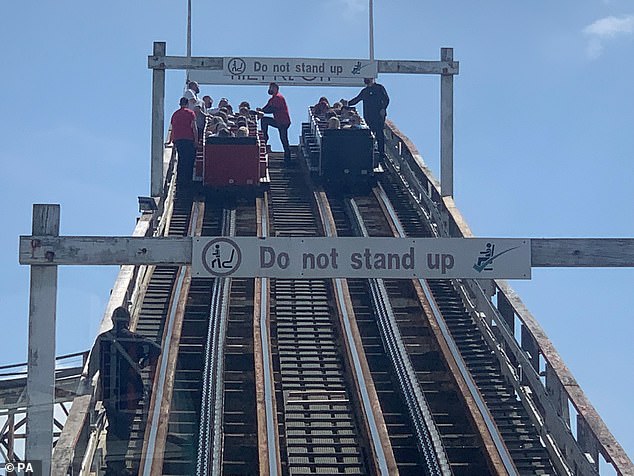 The wooden, twin-track Grand National ride at Blackpool Pleasure Beach (above)  built in 1935, broke down at midday – leaving thrill seekers stranded more than 50 feet above ground 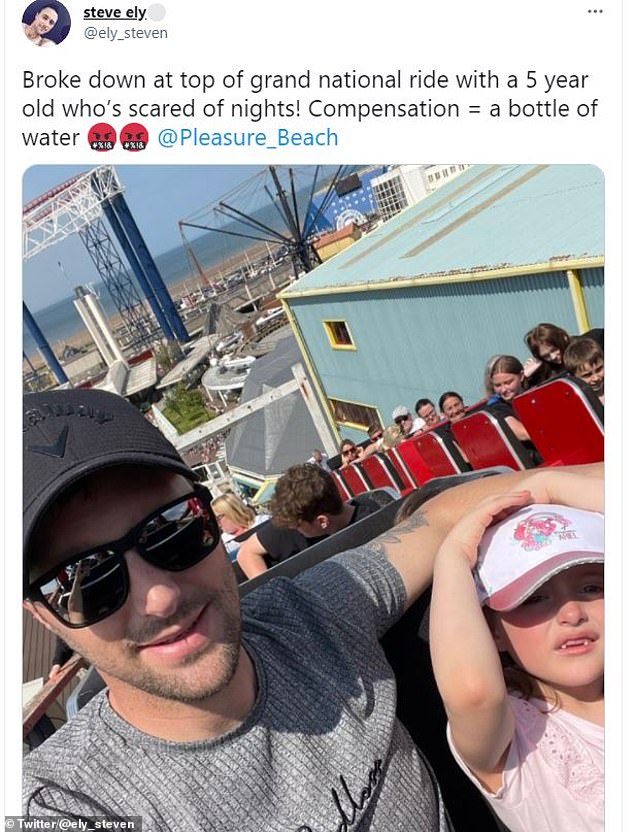 Steve Ely, from Sheffield, South Yorkshire, tweeted a photo of the stuck ride and criticised the Pleasure Beach

At about the same time, the UK’s tallest rollercoaster at the same amusement park, Big One, also suffered a temporary stoppage, but riders were able to remain seated and the ride continued five minutes later.

Steve Ely, from Sheffield, South Yorkshire, on the Grand National ride with his two children, tweeted a photo of the ride stuck at the top of an incline on the rollercoaster.

He also criticised the Pleasure Beach and said all customers were given in compensation was a bottle of water and tickets that could not be used.

An eyewitness waiting to get on the ride said his children were ‘devastated’ as the ride was stopped while the problem was dealt with.

A spokesman for Blackpool Pleasure Beach said: ‘At 11.55 am on Tuesday June 1 a stoppage occurred on the lift hill of the Grand National. 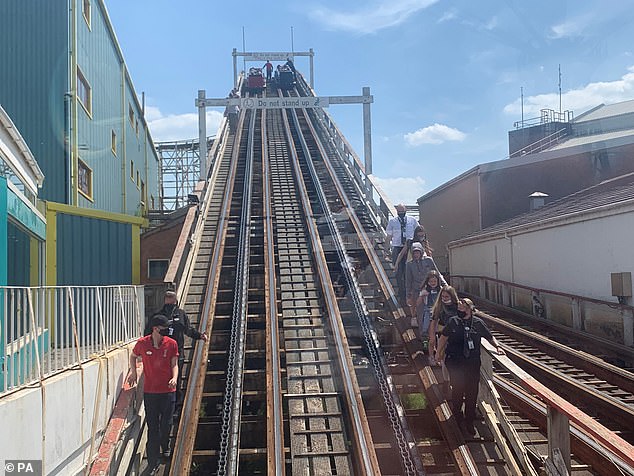 Staff at the popular attraction had to climb up the ride, which stands 62ft high, to escort nervous adrenaline junkies back to the ground

‘All riders were safely escorted down the lift hill, and the ride was checked and re-opened just before 1pm.

‘Shortly afterwards there was a very brief stoppage on the Big One lift hill, at 50ft, riders remained seated and the ride continued after five minutes.’

In April, riders on the UK’s tallest rollercoaster had to be escorted down after the amusement attraction broke down.

Adrenaline junkies were left stranded at the highest point of the 213ft Big One at Blackpool Pleasure Beach on Sunday, April 25.

Video taken from the park below shows park staff as they were forced to scale the rollercoaster before tentatively guiding nervous visitors to safety by making them walk down.