Pinkest flamingos are the most aggressive when fighting each other for food, scientists find

Flamingos that have bright pink feathers could be healthier and stronger and fight the most aggressively over food, a new study has found.

New research from the University of Exeter has found that lesser flamingos are the most aggressive when squabbling over food.

The study also found that bright pink plumage on a flamingo could be an indicator that they are healthier.

Whilst being observed flamingos fought over food less when they were fed outside in an open space.

Dr Paul Rose, a zoologist at the University of Exeter and lead author on the study, said: ‘Flamingos live in large groups with complex social structures. 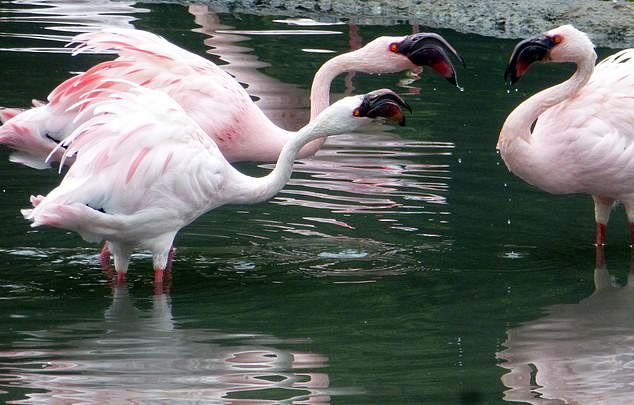 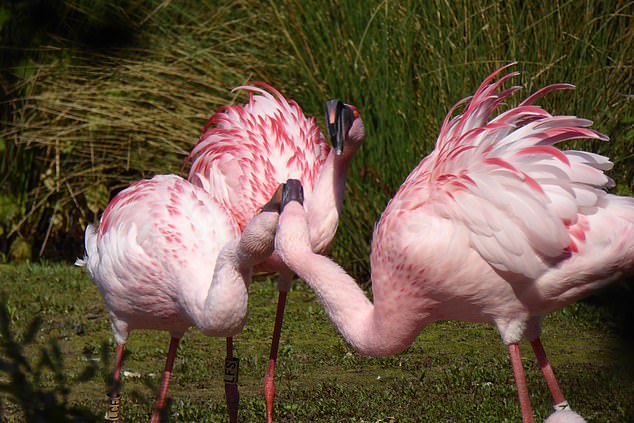 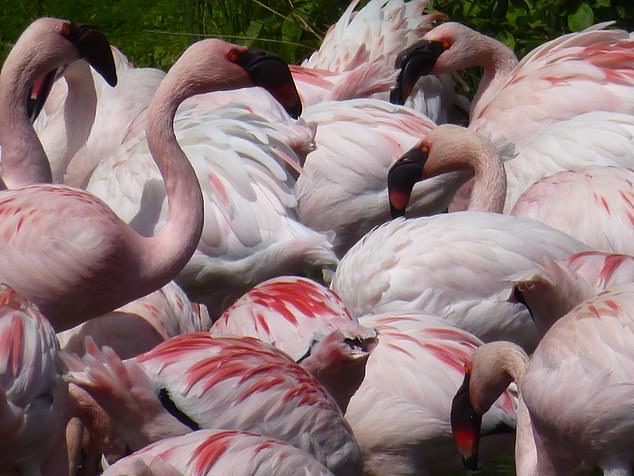 Zoologist at the University of Exeter and lead author on the study Dr Rose said: ‘When birds have to crowd together to get their food, they squabble more and therefore spend less time feeding’

‘Colour plays an important role in this.

‘The colour comes from carotenoids in their food, which for lesser flamingos is mostly algae that they filter from the water.

‘A healthy flamingo that is an efficient feeder, demonstrated by its colourful feathers, will have more time and energy to be aggressive and dominant when feeding.’

The team studied the lesser flamingo species at the WWT Slimbridge Wetland Centre in Gloucestershire.

They found flamingos pushed each other around while trying to get to the food, with brighter coloured birds appearing more aggressive than their paler rivals.

However, when it came to feeding in the outdoor pool, the flamingos observed spent less than half as much time displaying aggression.

No difference was found between males and females in rates of feeding or aggression, the researchers said.

According to the team, the findings published in the journal Ethology suggest captive birds should be fed over a wide space where possible.

Dr Rose said: ‘When birds have to crowd together to get their food, they squabble more and therefore spend less time feeding.

‘It’s not always possible to feed these birds outdoors, as lesser flamingos only weigh about 2kg and are native to Africa, so captive birds in places like the UK would get too cold if they went outside in the winter.

‘However, this study shows they should be fed over as wide an area as possible. 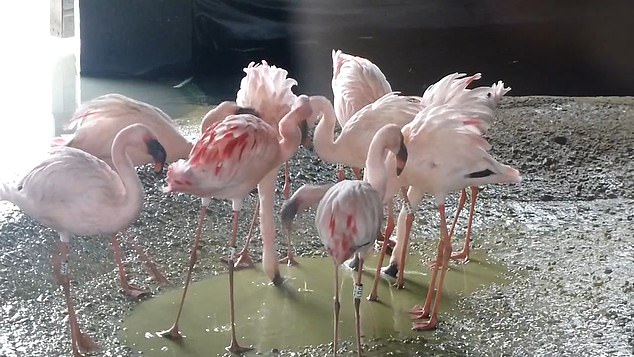 The team also found lesser flamingos to display a ‘flush of colour’ when they are ready to breed, only to regain their paler hues after becoming parents.

Dr Rose said that based on the team’s findings, he suggested some small changes to improve bird welfare at WWT Slimbridge, including providing more outdoor space to the flamingos.

He said that these tweaks resulted in ‘pinker, more relaxed flamingos’.

Previous research by the same team found that flamingos form long-lasting friendships and tend to spend time with close friends, despite being part of large flocks.