French officials vowed to speed up their vaccination campaign on Thursday, but warned that restrictions and curfews would remain in place in order to halt a rise in infections and hospitalizations.

“2021 will be the year of hope,” Jean Castex, the prime minister, said at a news conference, citing the vaccine, which has been administered to about 45,000 people in France so far.

But he added: “It is out of the question that we drop our guard in the coming weeks.”

Mr. Castex said that the number of new daily infections was still high — hovering around 20,000 — and pressure on hospitals was still acute, with nearly 25,000 Covid-19 patients hospitalized around the country.

Mr. Castex announced that cultural establishments that are currently closed, like museums, movie theaters and music halls, would remain shuttered until the end of January at least, and that bars and restaurants would not reopen before mid-February at the earliest — dashing the hopes of the service industry, which was still hoping to reopen on Jan. 20, as previously scheduled. 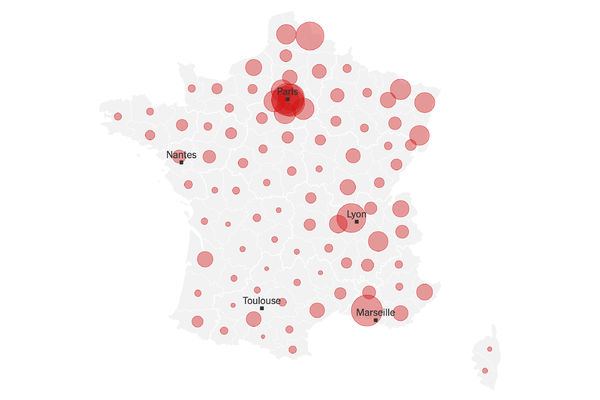 A detailed map shows the extent of the coronavirus outbreak, with charts and tables of the number of cases and deaths.

An 8 p.m. to 6 a.m. curfew will also remain in place for the time being, Mr. Castex said. In 15 areas of France, that curfew has already been tightened to 6 p.m., and could be similarly restricted in the coming days in 10 new areas. Mr. Castex said he could not rule out new nationwide restrictions, but he added that schools would only close again if the situation became particularly dire.

Mr. Castex also addressed a barrage of criticism over the government’s sluggish vaccination rollout, acknowledging that it had started slower than in other countries but attributing the delay to France’s initial focus on retirement and nursing homes.

Still, the government vowed to speed things up, promising that at least 1 million people would be vaccinated by the end of the month and announcing that all people older than 75 would be eligible for vaccinations starting Jan. 18.

“We are doing everything to enable you to get vaccinated in good conditions,” Olivier Véran, the health minister, said at the news conference, adding that vaccination centers would soon open around the country and that people would be able to go through a simplified sign-up procedure to get their shots.

Mr. Véran also announced that French health authorities had approved administering the second Pfizer vaccine shot up to six weeks after the first shot, instead of the recommended three-week interval.

France also announced on Thursday evening that health authorities had detected two clusters of the new, more transmissible variant of the virus that was first identified in Britain. The clusters were in the Ile-de-France region, where Paris is, and in Brittany. Overall, French health authorities have reported 19 cases of the variant in France, and three cases of a different one first detected in South Africa.

“We want to avoid the spread of this variant in France at all costs,” Mr. Véran said of the British variant, adding that health authorities were closely monitoring it.