“THERE WAS A BLOKE NURSING A GUN… THEN THE SHOOTING STARTED”

Masked bandits and a bank teller fought a running gun battle during an $84,700 bank robbery in Forest Hill last night. 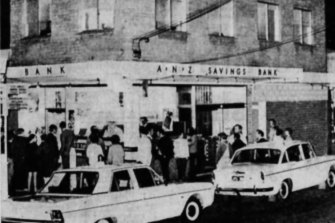 The outside of the ANZ branch involved in the robbery.Credit:The Age Archives

It was Victoria’s biggest bank hold-up.

The teller, Mr Alan Misson, 22, fired twice to stop them as they shot their way in with a sawn-off shotgun.

The robbers blasted the teller’s counter and then forced him to drop his revolver.

Then they forced the teller and the bank manager against the wall.

The bandits – wearing hessian masks – scooped up $84,700 in notes from a table near the main vault at the back of the bank.

A third bandit who stood outside armed with a pistol fired two shots through a side window as the other two robbers grabbed the money. The bullets smashed into the inside walls.

At least seven shots were fired in the two-minute battle, but nobody was hurt.

The bank’s security camera was not activated during the hold-up.

The three raiders wore overalls. One is thought to have had a dark beard.

They ran from the bank, firing as they left, and sped off in a stolen blue-and-white Holden sedan. 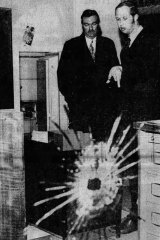 Teller Alan Misson points to a window that was shattered by a bullet during the hold-up.Credit:The Age Archives

They dumped the car about a mile away from the bank.

It was found about 15 minutes later in Marama Street, East Burwood.

Police sealed off the street and made a house-to-house search.

They believe the bandits jumped into another blue-and-white Holden sedan parked in the street.

Five employees, including two young women, were in the bank when the bandits crashed in at about 6.15 p.m. after smashing the front glass door with a fire hydrant cover they grabbed from nearby.

They were working late counting and sorting a large amount of money that had accumulated over the long weekend.

The bank manager (Mr D B McDonald) sand Mr Misson were counting takings ready for storage in the bank’s vault.

The two girls, both aged about 20, were in an upstairs part of the bank. One girl, Joan Gerecke, 24, telephoned police when she heard the first shot.

Only bank staff witnessed the robbery, which took place in the deserted Forest Hill shopping complex off Canterbury Road.

But two men working in a nearby hairdressing salon heard the bandits open fire and they dived for cover.

“There was a bloke in a coat and a woolly mask standing there nursing a gun.

“Then the shooting started.

“I dived face first under the counter and stayed there. I was scared to death.”

Last night bank officers were examining the extensive damage the robbers left in their wake.

Blasts from the raiders’ guns demolished a teller’s screen, blew a huge hole in a window of a manager’s office and blew out a set of glass louvres above the office. Shotgun pellets chipped woodwork in the bank counter.

The two shots fired by the teller smashed into the bank’s front windows.

The fire hydrant cover used by the bandits to break down the front door ended up against the bank counter.

Consorting squad detectives were searching for the bandits last night.

The ANZ Bank last night offered a “substantial” reward for information leading to the arrest of the hold-up men.

“It was lucky no one was killed tonight,” the ANZ Bank’s chief security adviser (Mr E. Hamilton) said last night.

“It was a desperate attack, with great danger to our officers.

The bandits stole the teller’s revolver before they left, but they left behind two spent cartridges from a sawn-off shotgun found later in the abandoned getaway car.

When the call to police came about 15 cars were rushed to the area to seal it off.