Grieving parents of Gabby Petito visit memorial for their daughter

The mother and stepfather of Gabby Petito visited a memorial on Long Island, New York, when a Teton Co. coroner announced the woman had been strangled.

Petito posted a photo of herself in front of the colorful mural to her Instagram page in 2019, and it has since appeared across various news outlets, as well as on posters and T-shirts commemorating the young woman’s life.

“It’s different now. For me, it changed,” Jaguart told Fox News of the meaning behind the mural he created for Valentine’s Day two years ago. “It’s … bittersweet, you know? My sensation now is honor … because the people love the mural, but for the first time, I was feeling very, very sad.”

The artist, who is originally from Argentina and moved to Colorado five years ago, “refreshed the mural” by adding “more intense color” earlier this week after it received renewed attention following Petito’s death. 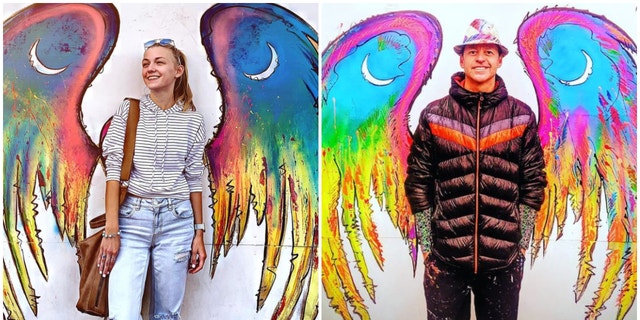 Jaguart has been an artist for about 40 years and has painted murals across South America in countries like Brazil, Costa Rica, Peru and others.

“My mother is a very visionary person,” he said. “She gave me support — a lot — to [take] classes for drawing,” he said.

Jaguart added that he loves the “quality of life” in Colorado and is grateful to live there and share his artwork with others.

Petito was traveling cross country in a Ford Transit van with her fiancé, Brian Laundrie, over the summer before her parents reported her missing on Sept. 11. Eight days later, the FBI discovered her remains in the Bridger-Teton National Forest in Moose, Wyoming, one of her travel destinations.

Laundrie returned home to North Port, Florida, in Petito’s van without her on Sept. 1. His parents reported him missing on Sept. 17. He is a person of interest in Petito’s killing and wanted on debit card fraud charges.