That’s a lot of Cleaning Windows! Six-bed Art Deco home where George Formby entertained guests during the Blitz can be rented for £3,995-a-month

A historic Art Deco house where George Formby stayed to escape the Blitz has been revealed.

Once the UK’s highest paid entertainer, George Formby gave al fresco performances to guests at the 1930s house by sitting on the balcony and playing his famous ukulele to the audience in the garden.

The singer-songwriter, famed for his comedy song ‘When I’m Cleaning Windows’, was one of the highest paid entertainers in the country.

Functions at the six-bed property in Oxford – dubbed a ‘party house’ – were a far cry from the devastation of the Luftwaffe bombing raids in London and other cities at the time. 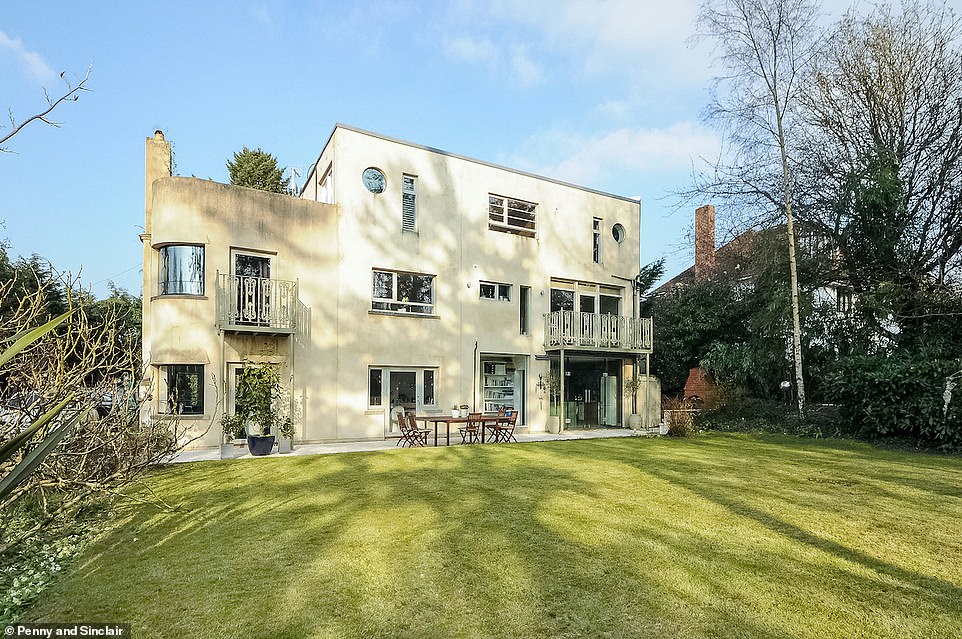 The six-bedroom property (above) where George Formby, once the UK’s highest paid entertainer, stayed during the Blitz 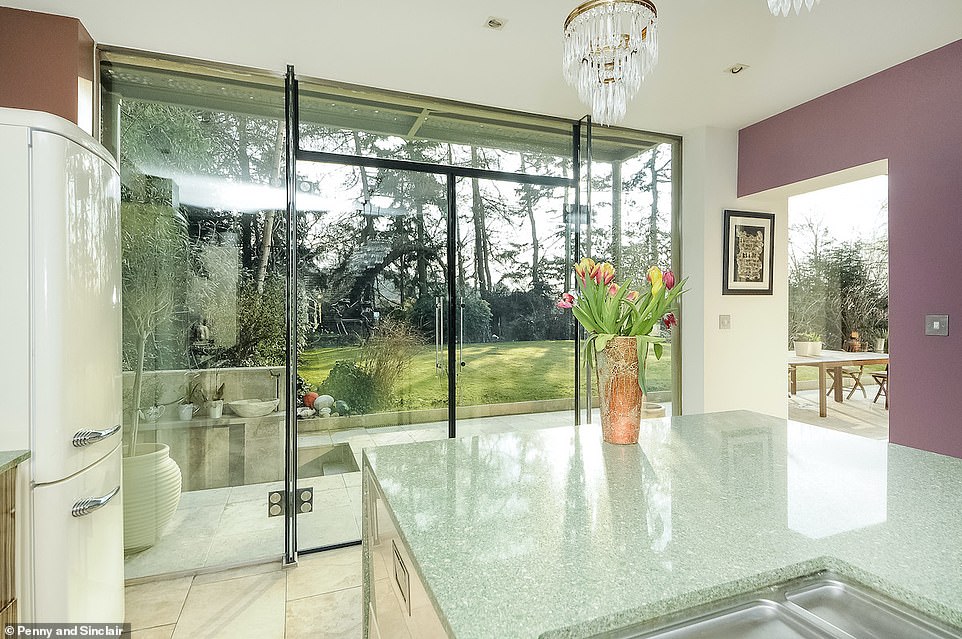 The 1930s Art Deco property has a wide glass-door in the kitchen, complete with a marble green tabletop and light brown tiled floor 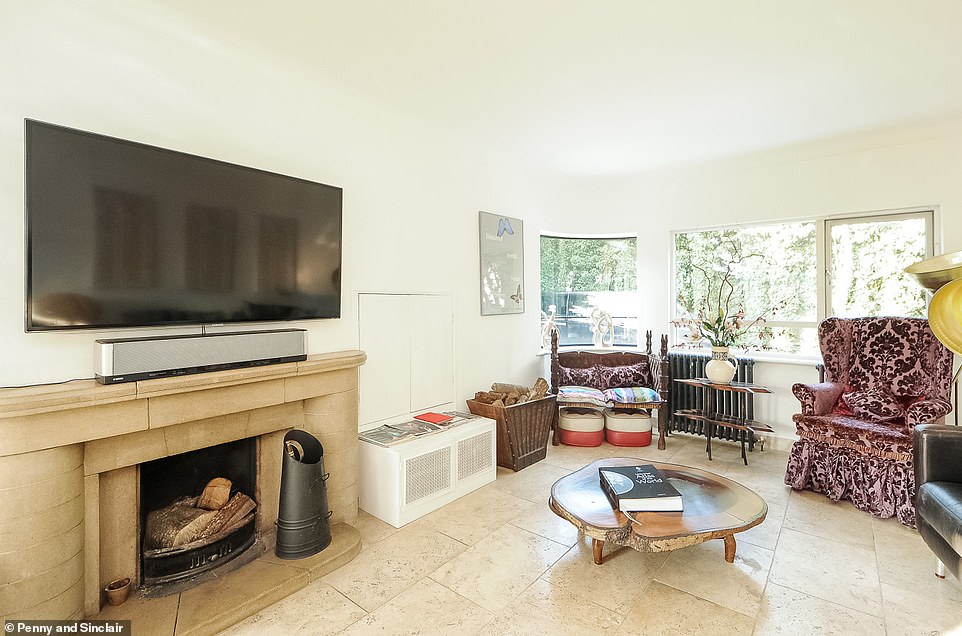 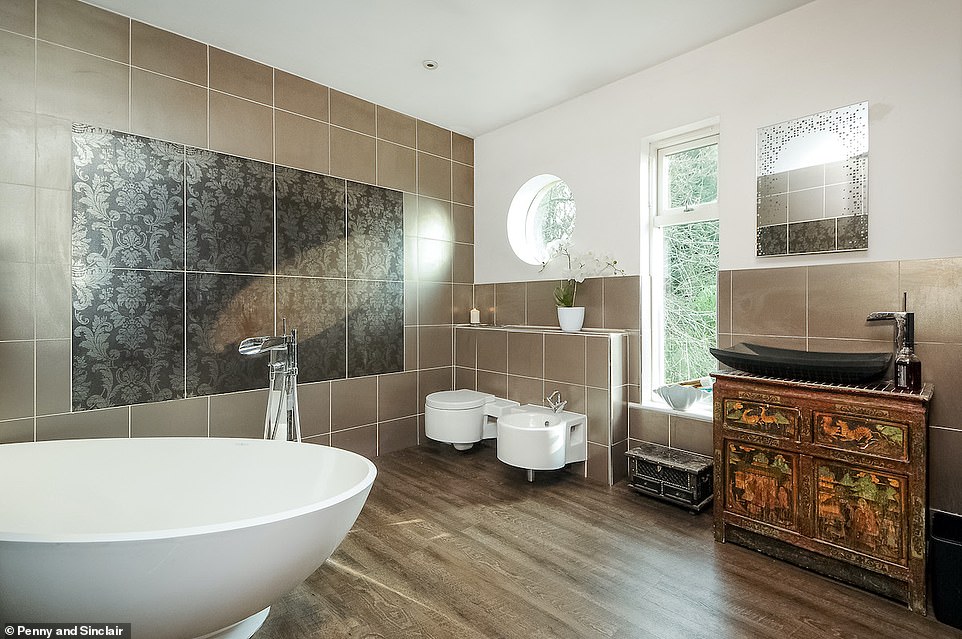 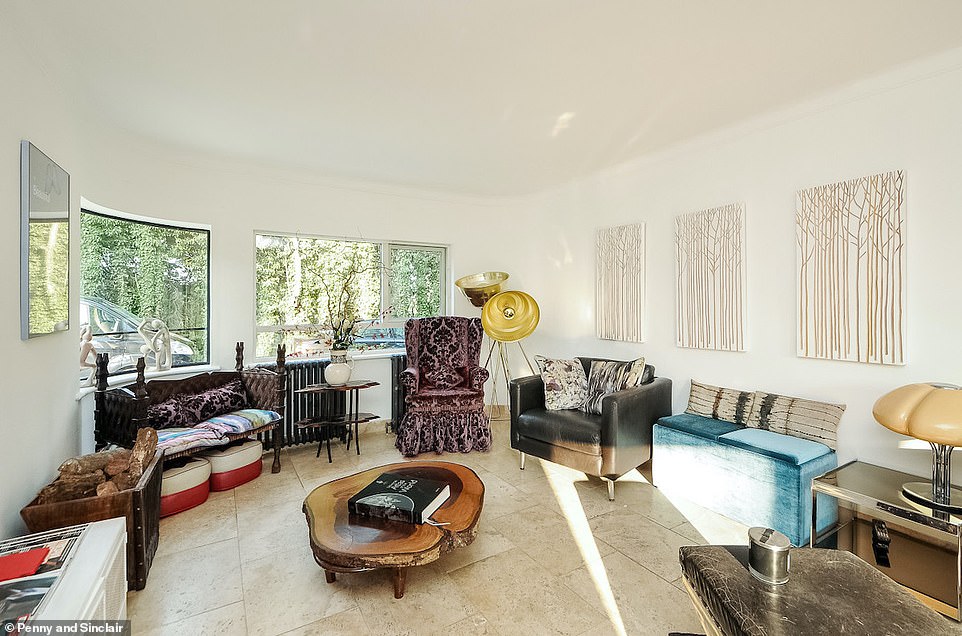 The renovated property in Oxford is now available for rent for £3,995 per month

Over 30 guests would arrive from the capital to escape the Nazi ariel campaign in 1940 and 1941.

The partygoers from the world of film and theatre would play croquet on the lawn and have dinner dances.

But then film star Formby – famed for entertaining troops during World War Two – took over with his outdoor solo performances to the delight of the guests.

The renovated property which boasts four bathrooms, a roof terrace and balcony is now available for rent for £3,995 per month. 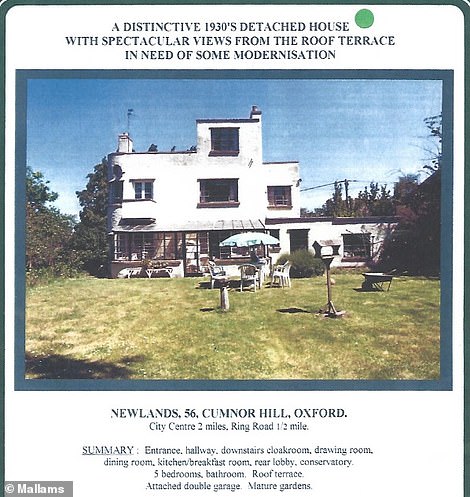 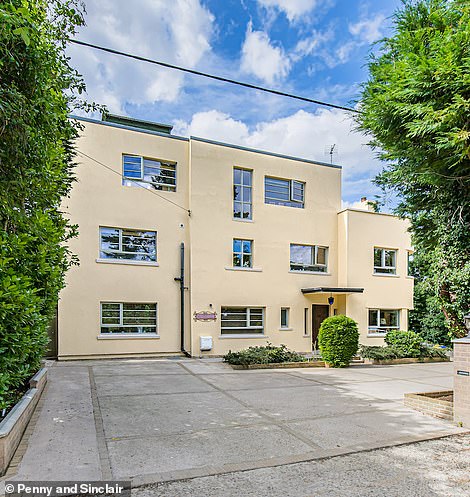 The property boasts four bathrooms, a roof terrace and balcony. It has previously been described as a ‘distinctive 1930s detached house’ 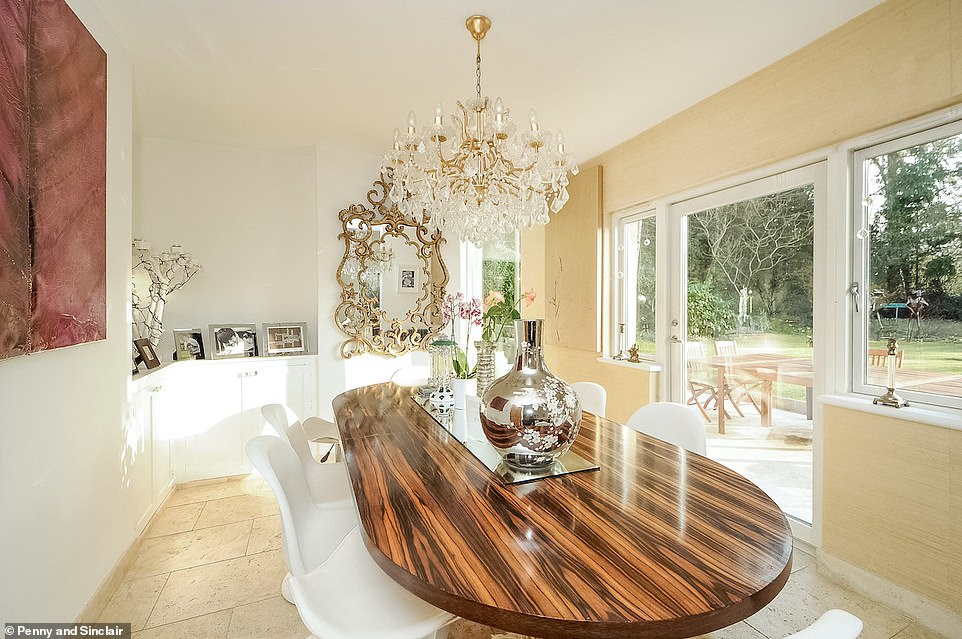 The property also features both an outdoor and indoor dining area, with a chandelier and intricately designed mirror 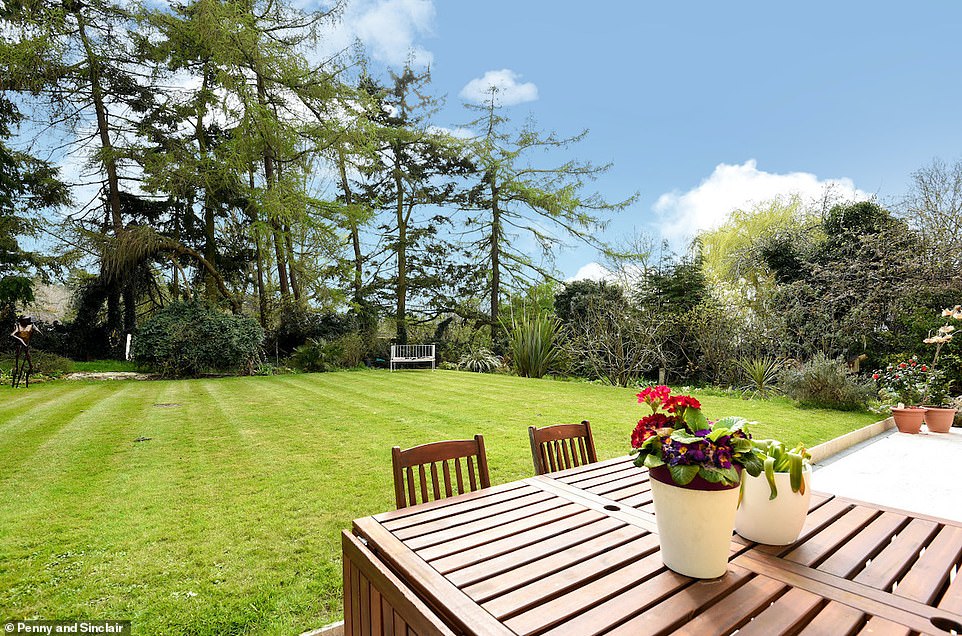 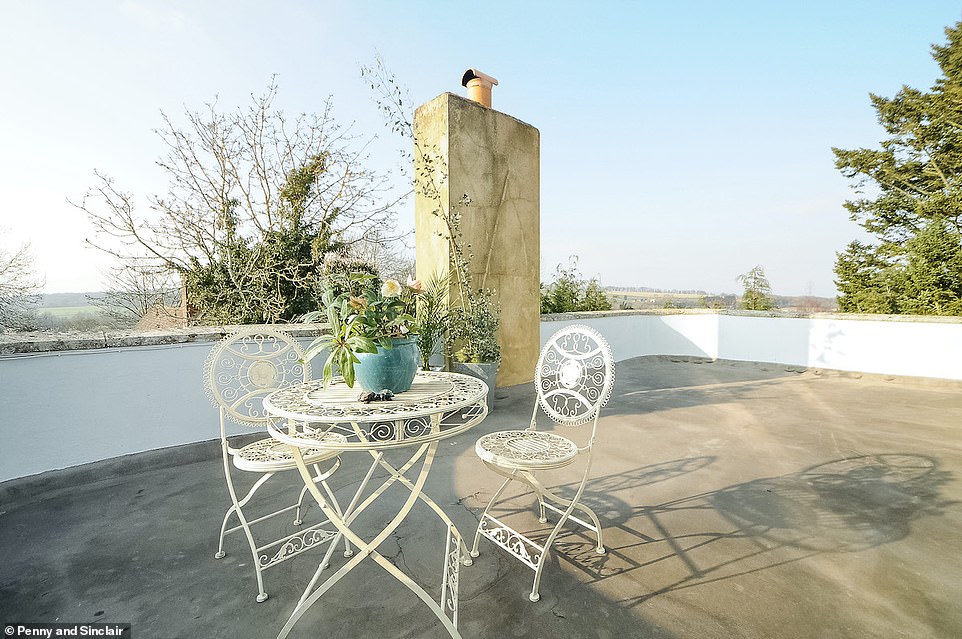 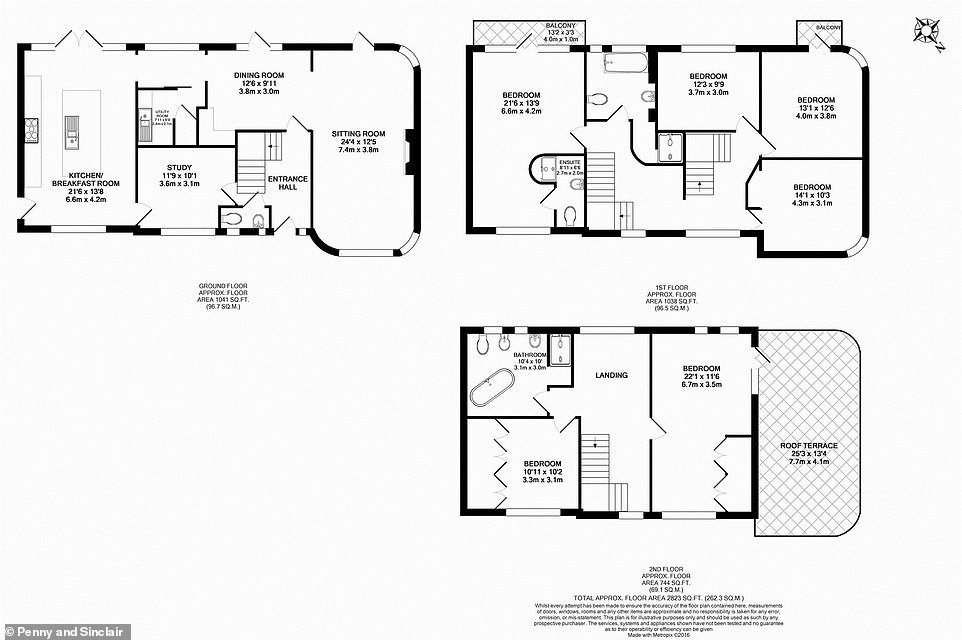 The floor plan details the layout of the six-bedroom property, which also contains a study and en-suite bathroom

Owner Percy Patti, 50s – who bought the house in 1997 – said: ‘It’s absolutely right that George Formby would have stayed at the house while visiting, which he did frequently.’ 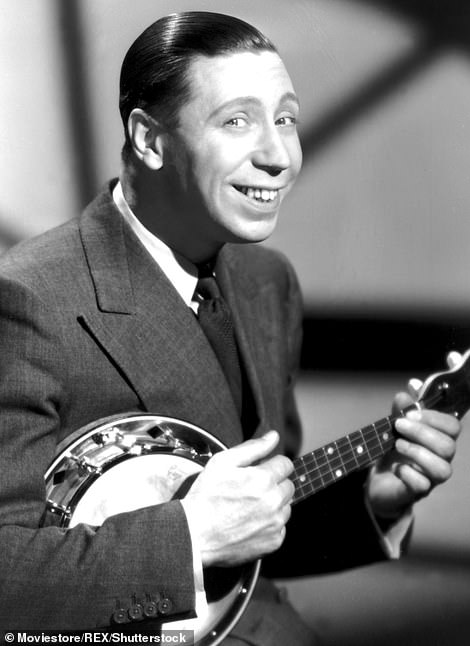 The house is up for let with agency Penny and Sinclair.

The listing reads: ‘The ‘secret’ lane where the property is situated used to be owned by the Earl of Abingdon.

‘Before the original section of the house was built in the 1930s, just before World War ll, the area was used as an apple orchard.

‘In the war years, the house was a popular hang-out for sections of the London film and theatre community, escaping the blitz – George Formby was a frequent visitor.’

It continues: ‘Even during the Second World War, the house was known as a ‘party house’.

‘Guests would arrive from London to play croquet on the law, dance and dine.

‘The famous ukulele player, George Formby, would sit on one of the balconies and play to an audience in the garden.

‘Guests could park up to 14 cars on the large drive in front of the house.’

The Blitz began on September 7, 1940, and was the most intense bombing campaign Britain has ever seen.

Named after the German word ‘Blitzkrieg’, meaning lightning war, the Blitz claimed the lives of more than 40,000 civilians.

London was attacked 71 times and bombed by the Luftwaffe for 57 consecutive nights.

The City and the East End bore the brunt of the bombing in the capital with the course of the Thames being used to guide German bombers. Londoners came to expect heavy raids during full-moon periods and these became known as ‘bombers’moons’.

More than one million London houses were destroyed or damaged and of those who were killed in the bombing campaign, more than half of them were from London.

In addition to London’s streets, several other UK cities – targeted as hubs of the island’s industrial and military capabilities – were battered by Luftwaffe bombs including Glasgow, Liverpool, Plymouth, Cardiff, Belfast and Southampton and many more.

Deeply-buried shelters provided the most protection against a direct hit, although in 1939 the government refused to allow tube stations to be used as shelters so as not to interfere with commuter travel.

Hitler intended to demoralise Britain before launching an invasion using his naval and ground forces. The Blitz came to an end towards the end of May 1941, when Hitler set his sights on invading the Soviet Union.

Other UK cities which suffered during the Blitz included Coventry, where saw its medieval cathedral destroyed and a third of its houses made uninhabitable, while Liverpool and Merseyside was the most bombed area outside London.

There was also major bombing in Birmingham, where 53 people were killed in an arms works factory, and Bristol, where the Germans dropped 1,540 tons of high explosives and 12,500 incendiaries in one night – killing 207 people.