Berlin: German Chancellor Olaf Scholz has decided to send Leopard 2 tanks to Ukraine and allow other countries such as Poland to do so while the US may supply Abrams tanks, two sources familiar with the matter has told Reuters.

The decision concerns at least one company of Leopard 2 A6 tanks that will be provided out of Bundeswehr stocks, said Spiegel magazine, which first reported the news. One company usually comprises 14 tanks. 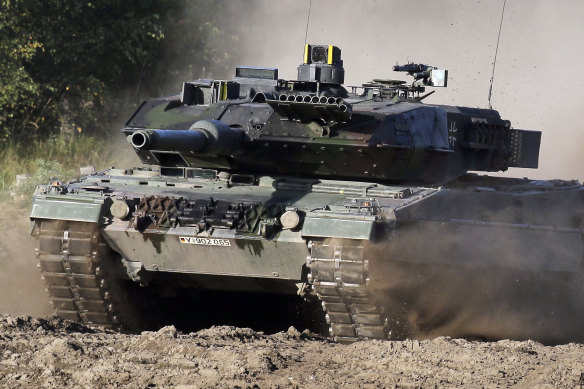 A Leopard 2 tank at a demonstration event near Hannover, Germany.Credit:AP

“Today the chancellor made a decision that no one took lightly. The fact that Germany will support Ukraine with the Leopard tank is a strong sign of solidarity,” Christian Duerr, parliamentary leader of the governing coalition partner Free Democrats (FDP) was quoted as saying by t-online news portal.

“The #Leopard’s freed!,” Katrin Goering-Eckardt, vice president of the Bundestag, tweeted, sharing a link of media report on the news.

Other allies, in Scandinavia for example, intend to go along with Germany in supplying their Leopard tanks to Kyiv, the magazine reported.

In the longer term, more tanks could be restored to be fit for use.

US officials also said that Washington were poised to announce it would drop its opposition to sending Abrams tanks to Ukraine, in a move designed to encourage Germany to follow.

They said details were still being worked out. One official said the tanks would be bought under an upcoming Ukraine Security Assistance Initiative package, which provides longer-range funding for weapons and equipment to be purchased from commercial vendors.

Defence “Secretary [Lloyd] Austin did have very productive conversations with his German counterpart when he was in Germany” for meetings last week, Brigadier General Patrick Ryder told a news conference.

The head of Ukrainian President Volodymyr Zelensky’s administration said the delivery of German tanks was necessary to restore the nation’s borders and described it as a powerful blow for democracy.

“A few hundred tanks for our tank crews – the best tank crews in the world. This is what is going to become a real punching fist of democracy against the autocracy from the bog,” Andriy Yermak wrote on Telegram shortly after sources said Berlin would approve the transfer of Leopard battle tanks.