Washington: Some of Fox News’s most prominent hosts have attracted attention, and even drawn praise from unusual quarters, for urging their viewers to take COVID-19 seriously and promoting the coronavirus vaccines.

The Murdoch-controlled channel has been coming under increasing criticism in recent weeks for promoting resistance to the vaccines among its viewers amid a surge in the Delta variant in the US.

Former News Corp executive Joseph Azam told The Sydney Morning Herald and The Age over the weekend that he believed Fox was costing lives by encouraging scepticism about the vaccines in conservative America. 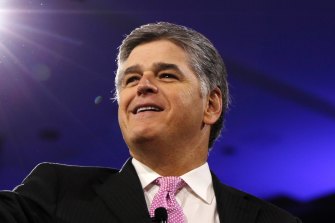 “I can’t say it enough,” Hannity said. “Enough people have died. We don’t need any more death. Research like crazy. Talk to your doctor…I believe in science. I believe in the science of vaccination.”

Hannity, who has previously said he had been vaccinated, has been noticeably more positive about the vaccines than fellow prime-time hosts Tucker Carlson and Laura Ingraham.

But the strength of his plea this week sparked suggestions that Fox personalities and executives were taking note of the mounting criticism of their most-watched hosts’ vaccine coverage.

Earlier in the pandemic, Hannity regularly downplayed the seriousness of the coronavirus in line with then-president Donald Trump’s rhetoric.

“If you have the chance, get the shot,” Doocy said. “It will save your life.”

Doocy was quickly countered by co-host Brian Kilmeade, who claimed that it was not the government’s job “to protect anybody” and said of those who choose not to get vaccinated: “If you feel as though this is not something for you, don’t do it, but don’t affect my life.”

CNN reported on Wednesday (AEST) that the Biden administration had held high-level talks with Fox about pandemic and vaccine-related programming, drawing an adamant denial from the network.

“CNN’s reporting is inaccurate,” Fox said in a statement.

“There have been no high level conversations between FOX News Media and the White House regarding our coverage.

“We had one routine briefing with the White House in early May on vaccination rates and our DC bureau personnel are regularly in touch with them on a variety of issues, as is the case with every other network.”

White House press secretary Jen Psaki told reporters earlier Tuesday that White House officials had “been in touch with every network and many, many media outlets about coverage of COVID-19” as part of their effort to “make sure people have accurate information”.

“I think you all know we’re never shy when we have an issue with a story,” she said.