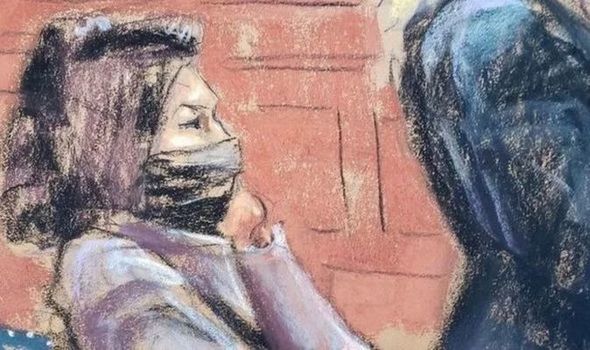 Annie Farmer testified as the fourth accuser of the British socialite, who stands trial in New York for recruiting, grooming and abusing girls for sex offender Jeffrey Epstein. Now 42, she described meeting the late paedophile and his alleged procurer when she was 16.

Ms Farmer, the only accuser in the case to testify under her real name, claimed the pair had lavished her with gifts and offered to advance her studies in a scheme to entangle her in their alleged sex trafficking ring. Before discussing Maxwell, 59, she told jurors how she was flown to New York by Epstein to be with her older sister Maria, who was working for him.

In Manhattan the paedophile took them to see Phantom Of The Opera, sitting between the two siblings.

During the performance Ms Farmer said Epstein “caressed” her hand and then her leg. “I felt sick to my stomach. It wasn’t something that I was at all expecting,” she told the court.

Ms Farmer then went on to recall being flown to the billionaire’s secluded retreat in New Mexico in 1996 where she first met Maxwell.

She went knowing Maxwell would be there, saying it made her feel “more comfortable” that an older woman would be present.

She said she got the impression the two were “romantic partners”.

Ms Farmer told jurors how she talked to Maxwell about her “life, my school, British authors”.

Later she said she was taken shopping and bought a $100 pair of cowboy boots before going to the movies with Epstein and Maxwell. She said: “Afterwards back at the ranch, Maxwell told me to rub his feet, that she’d show me how. Maxwell told me to get undressed and started rubbing my breasts. Once she pulled down the sheet I felt frozen. I wanted to get off the table, I wanted out of there. The door was open and I had the sense Epstein could see.”

Ms Farmer said Epstein later climbed into bed with her: “Suddenly he opened my door, bounding into the room in a playful way, saying he wanted to cuddle. She said Epstein “pressed his body into me”. Asked what she told her mother after the trip, Ms Farmer said: “I told her I wasn’t raped and I didn’t want to talk about it.”

She said she had struggled to step forward because it was a “shameful” memory, but she wanted “accountability” and “these people stopped”.

Maxwell has pleaded not guilty to eight counts of sex trafficking and other charges for her alleged role in recruiting and grooming teenagers for Epstein to abuse from 1994 to 2004.

The financier killed himself aged 66 in August 2019 in a jail cell while on sex abuse charges. The trial continues.