The exhibition in Saint Michael’s Square marks Russia’s attempt to take the capital city and their failure against Ukrainian defiance. According to Ukrainians who took selfies at the sight and brought their children to see the destroyed relics, the exhibition “makes us believe”.

The display in the city centre is placed directly in front of the Ukrainian foreign ministry.

Not only are the people of Ukraine taking an interest in the spoils of the conflict, but pet goats have also been seen climbing on some of the damaged equipment.

One goat called Myra even went as far to show her dislike of Russia by nibbling a hat that used to belong to a Russian soldier.

It features multiple forms of military equipment including a self-propelled howitzer, rusty tanks including a battle tanks turret which has been completely blown off. 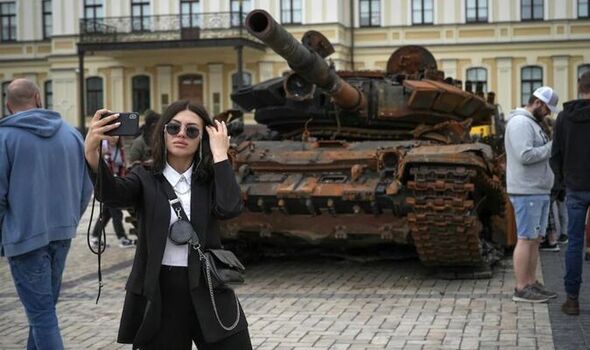 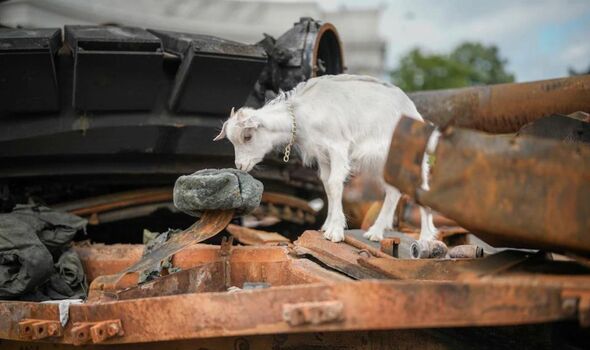 Another battle tank in the Square is rusty and its tracks have completely buckled following what is assumed to be an explosion.

According to Matthew Chance from CNN a wrecked T-72 Russian Tank is in the Square and has been “absolutely devastated of course by an anti-tank weapon”.

An anti-aircraft gun and missile casings are also scattered on the floor and many of the tanks featured writing scratched into it.

David Knowles from The Telegraph went to visit the exhibition alongside Anna, a local who featured as a guest on the Telegraph’s podcast ‘Ukraine: The Latest’. 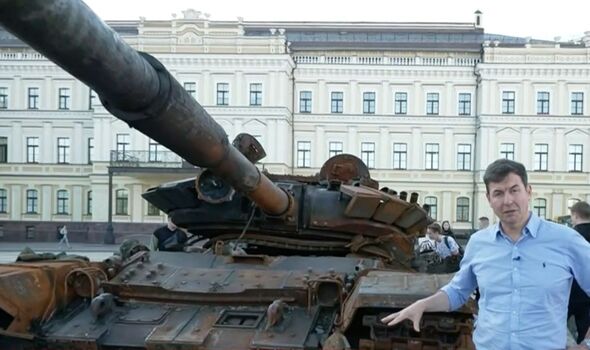 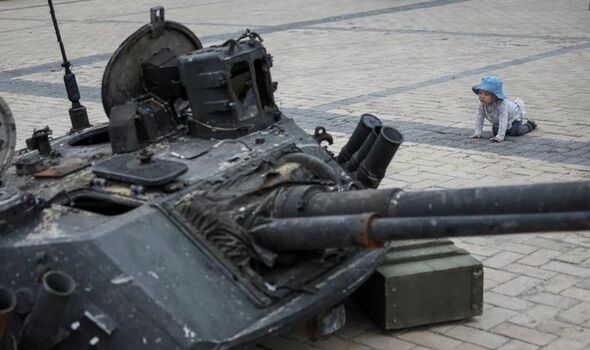 Mr Knowles said: “There is quite a lot of Ukrainian written on these so, Anna what do these say?”

The Ukrainian replied: “Basically lots of very very offensive words towards Putin and Russians in general, and also like right here, it says ‘For Mariupol’.”

Many Ukrainian families have brought the next generation of Ukrainians to the site including babies and children.

Such an exhibit is the first time people in Ukraine have an opportunity to see this equipment up close.

Mr Chance added: “It’s all here for the benefit of the people of Kyiv to show them the weaponry that has been essentially threatening their lives over the course of the last [five] months.”

A visitor at the site spoke with the CNN reporter and told him it is an important exhibition because “seeing this Russian weaponry destroyed in this way makes us believe that we can win.”