Gordon Brown warns that Joe Biden hates Brexit, will take Ireland’s side during talks because of his family links and says it’s ‘unrealistic’ to hope for a swift US trade deal

Gordon Brown today insisted Joe Biden will be a ‘great friend of Britain’ as he predicted the President-elect could visit the UK twice in his first year in the White House.

Mr Brown said he believed Mr Biden will come to the UK in 2021 to attend a meeting of the G7 in the summer and then again in November to take part in a UN climate change conference set to be held in Glasgow.

However, the Labour former prime minister warned the UK could have to wait to strike a post-Brexit trade deal with the new US administration.

He said negotiating a trade accord with Downing Street would ‘not immediately’ be a priority for Mr Biden who he warned is no fan of Brexit and is likely to be heavily influenced by Dublin in his dealings with the UK.

Mr Brown’s intervention came amid fears that Mr Biden and Boris Johnson may not get along after Democratic sources questioned whether the latter is an ‘ally’. 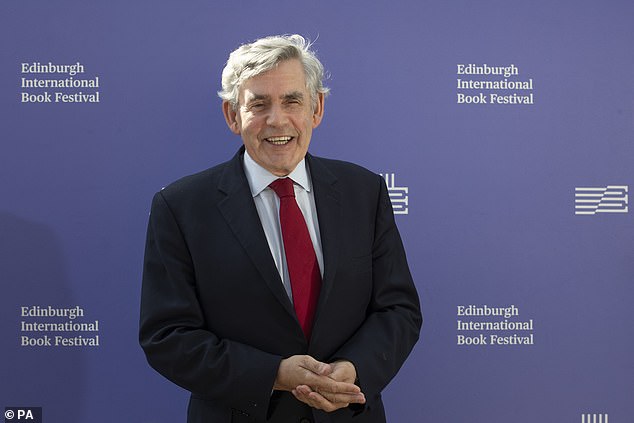 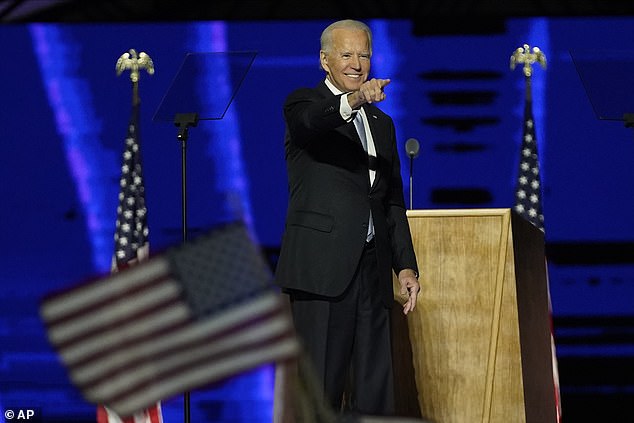 However, Mr Brown conceded that Mr Biden is no fan of Brexit and is likely to be heavily influenced by Dublin in his dealings with the UK

Mr Johnson yesterday tried to lay the groundwork for a strong relationship with Donald Trump’s replacement as he said there is ‘far more that unites us than divides us’.

Mr Biden previously described Mr Johnson as ‘a physical and emotional clone’ of Mr Trump and is believed to still be be annoyed at the PM over controversial comments he made about Barack Obama.

Mr Johnson lashed out at Mr Obama in 2016 for removing a bust of Sir Winston Churchill from the Oval Office and suggested it was a ‘symbol of the part-Kenyan President’s ancestral dislike of the British empire’.

But Mr Brown, who worked with Mr Biden when he was PM and the latter was vice president in 2009, said the new President will be good for the UK.

‘I think he wants to be a friend of Britain, I think he plans from what I know to come to Britain within the first six months of becoming President, probably to the G7.

‘I think he plans to come again for Glasgow, of course if it is not online.

‘So he could have two visits to Britain in the first year of his presidency.’

Mr Brown was adamant Mr Biden will want to ‘cooperate with Britain’ but he made clear the new occupant of the White House will disagree with Mr Johnson on the crunch issue of Brexit.

He also admitted the new President, who has Irish ancestors, is likely to be guided by Dublin in his dealings with the UK amid a rumbling row over Mr Johnson’s plans to override parts of the Brexit divorce deal.

Mr Biden warned during the presidential campaign that any trade deal with the US ‘must be contingent upon respect’ for the Good Friday Agreement.

Critics claim Mr Johnson’s Internal Market Bill, currently making its way through Parliament, would imperil the agreement but the Government insists it does the opposite.

Mr Brown told the BBC’s Radio 4 Today programme: ‘He would prefer us to be in the European Union, I know that.

‘That is why I think he is already speeding up the [post-Brexit trade] talks on Europe [between the UK and the EU] and we may reach a conclusion so that that triggering of the Internal Market Bill won’t happen and relations with Ireland will not be affected. But he generally wants to cooperate.’ 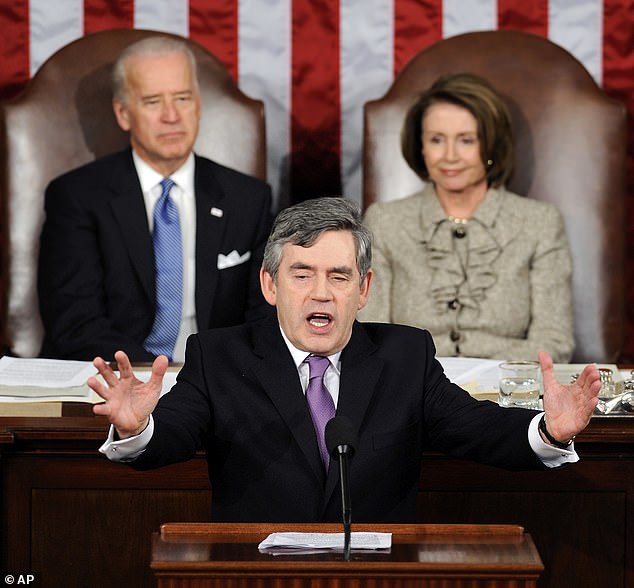 Mr Brown worked with Mr Biden when he was PM in 2009 and the latter was vice president. The former Labour premier is pictured addressing a joint session of Congress on Capitol Hill in Washington in March 2009

Asked if a swift trade deal with the US is realistic, Mr Brown said: ‘Not immediately, no. But I think over time that is a possibility.

Asked whether Dublin’s take on important issues will be key to what Mr Biden thinks about the UK, Mr Brown said: ‘Yes, I think that is important but look, Joe Biden will want to work with Britain.

‘I know he went to China, I have talked to people about that, and he said look, we will cooperate where possible, there will be competition or conflict even where necessary and I think his view of international negotiations is he tried to work as closely as possible with people for the aims you have in common and where you have differences you admit them and you are open about them but you don’t let that affect trying to get something moving that will help the international community.’