Greta Thunberg was filmed leading protesters in a chant of ‘you can shove your climate crisis up your a***’ at COP26.

Mr Johnson pledged to put another billion pounds into green finance – provided the UK economy performs as expected – and stressed that he wants global leaders to unveil steps on ‘coal, cars, cash and trees’ – the things he believes will make the most different in limiting temperature rises to 1.5 degrees.

Outside in Festival Park, Miss Thunberg gave a passionate and foul-mouthed speech, telling demonstrators: ‘Inside Cop, there are just politicians and people in power pretending to take our future seriously… No more blah blah blah, no more whatever the f*** they are doing inside there!’

As heads of Government from around the world discussed what could be done to save the planet from ruin, the Swedish eco activist appeared to lay the blame for looming natural disasters squarely on them as she riled up her fellow activists with a chant of: ‘You can shove your climate crisis up your a***’.

A Scottish attendee had appeared to suggest singing ‘you can shove your rules up your a***’  before Miss Thunberg put her own spin on the popular melody of ‘She’ll Be Coming ‘Round The Mountain When She Comes’. 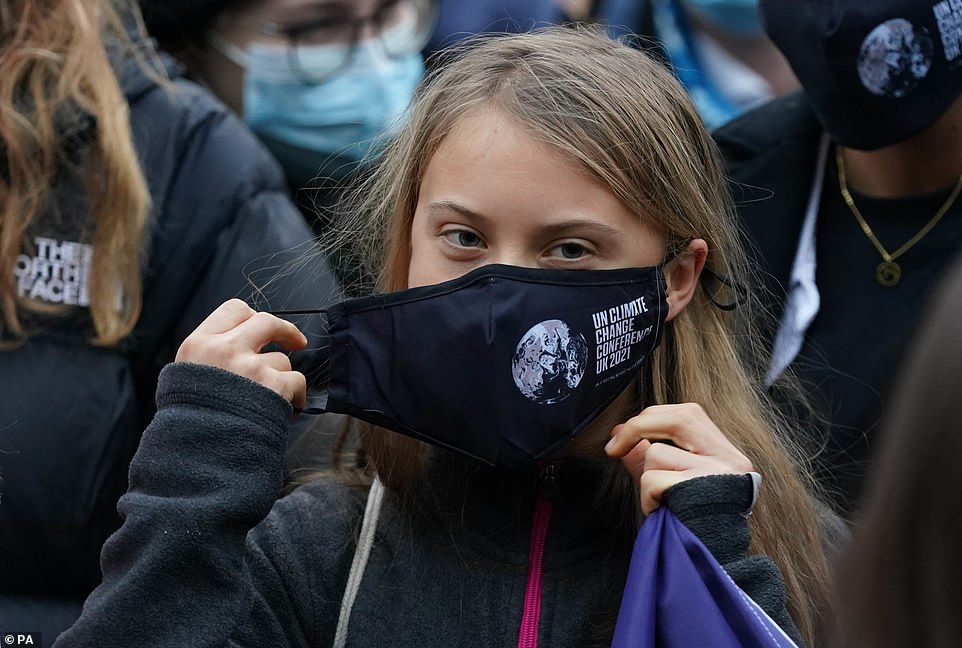 Greta Thunberg gave a passionate and foul-mouthed speech, telling demonstrators: ‘Inside Cop, there are just politicians and people in power pretending to take our future seriously… No more blah blah blah, no more whatever the f*** they are doing inside there!’ 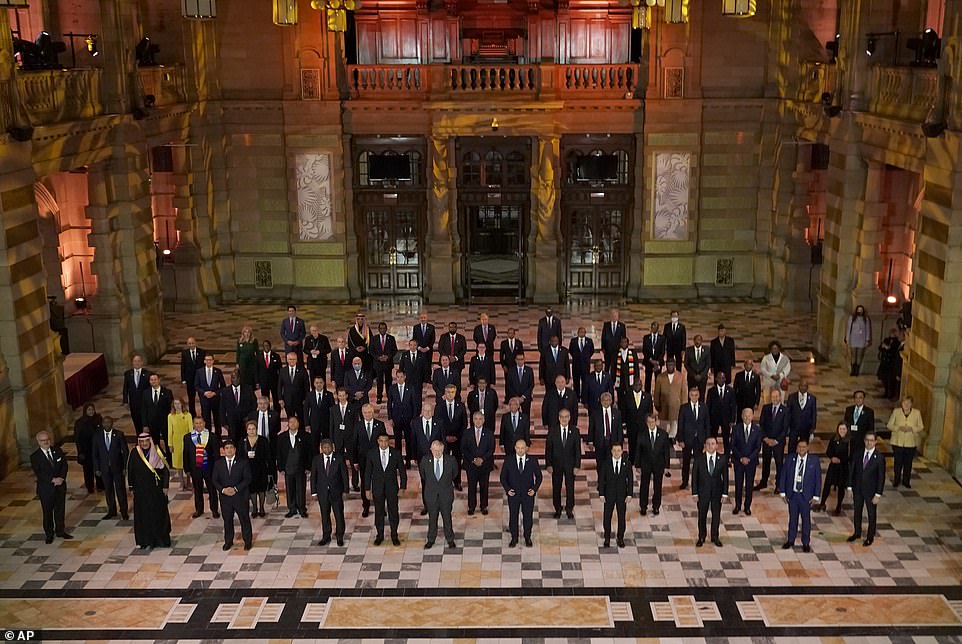 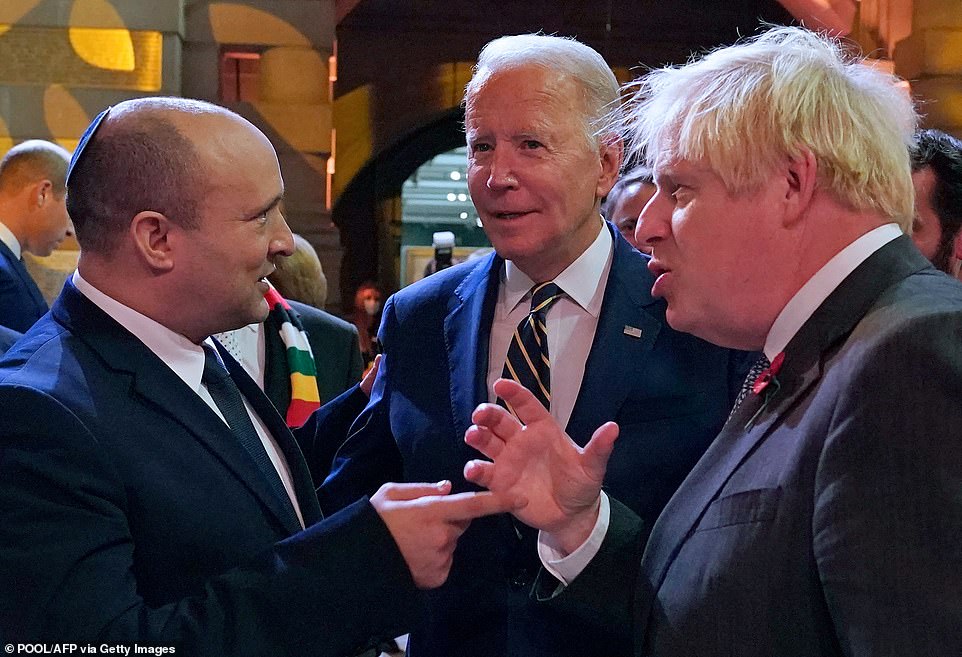 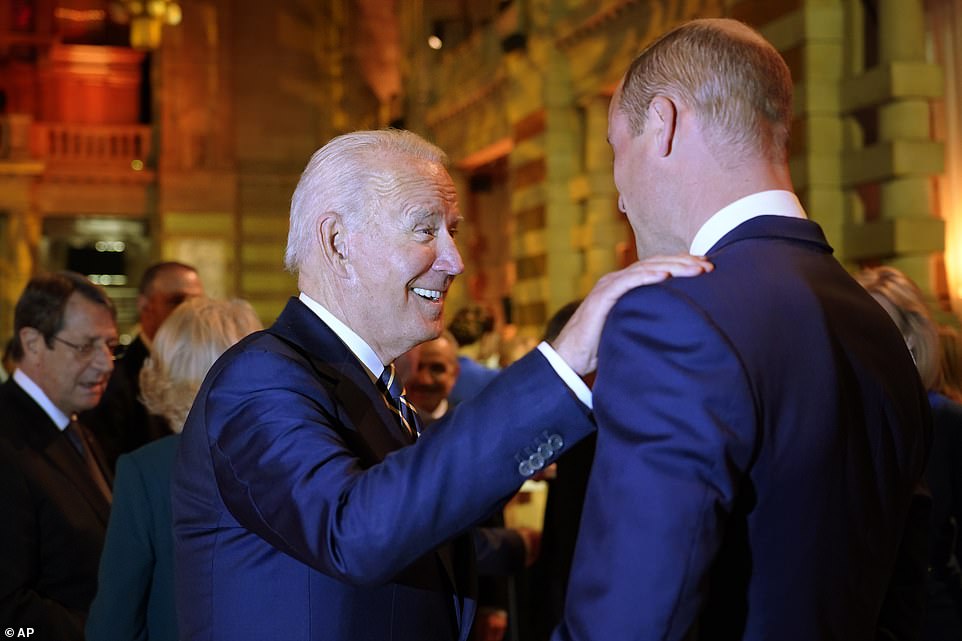 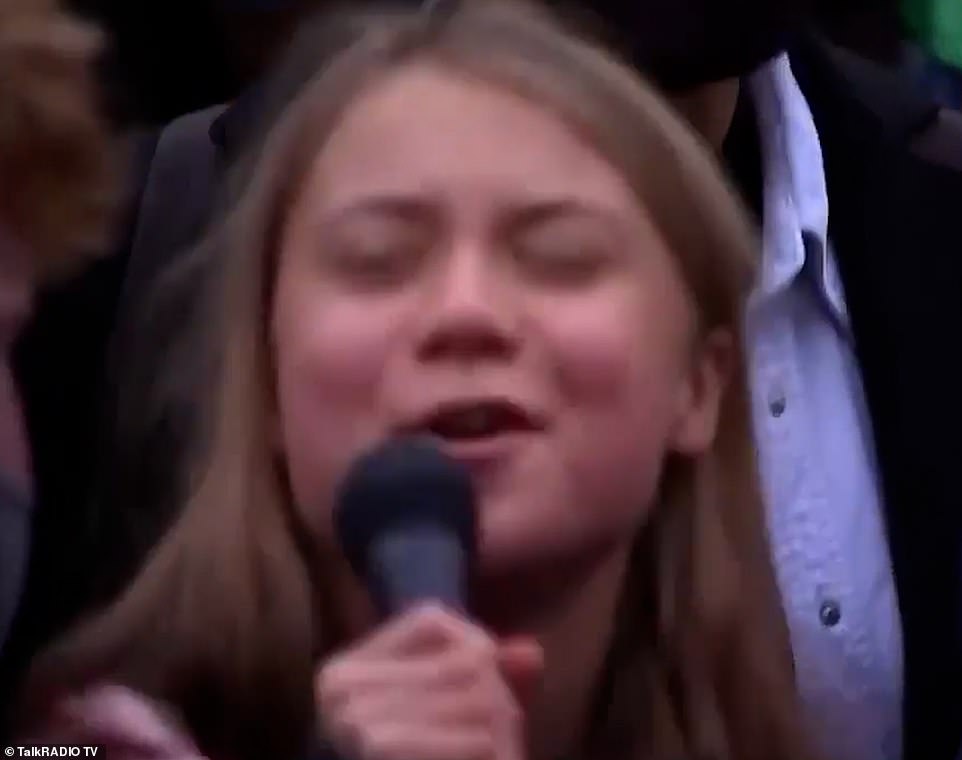 As heads of Government from around the world discussed what could be done to save the planet from ruin, the Swedish eco activist was also filmed riling up her fellow activists with a chant of: ‘You can shove your climate crisis up your a***’

What are the key aims at COP26?

Boris Johnson was keen to stress that time was ticking to tackle the climate emergency as he opened Cop26, and the irony will not have been lost on those waiting for him to deliver his speech, which started half an hour late.

Due to start at midday, the Prime Minister did not start his remarks until 12.30pm, with suggestions it was because US President Joe Biden – having landed at Edinburgh Airport in Air Force One at around 11am – had not reached his seat on time.

Once he did deliver his stark warning, Mr Johnson said: ‘It’s one minute to midnight and we need to act now.’

Mr Johnson was not the only one running late, as those in the vast queues to just get into the summit itself were also watching the clock.

Reports suggested it was taking those attending the conference hours to get through security checks at points on Monday morning.

Photos of the long lines appeared on social media, with journalists reporting they were being told by security not to tweet pictures and videos of the crowds.

Although maybe not on time, at least Mr Biden was in the right city, unlike veteran US news anchor Wolf Blitzer.

The CNN stalwart was roundly mocked on Twitter for broadcasting from Edinburgh, around 40 miles away, with the city’s famous castle in the background.

He tweeted: ‘I’m now reporting from Edinburgh in Scotland where 20,000 world leaders and delegates have gathered for the COP26 Climate Summit.’ 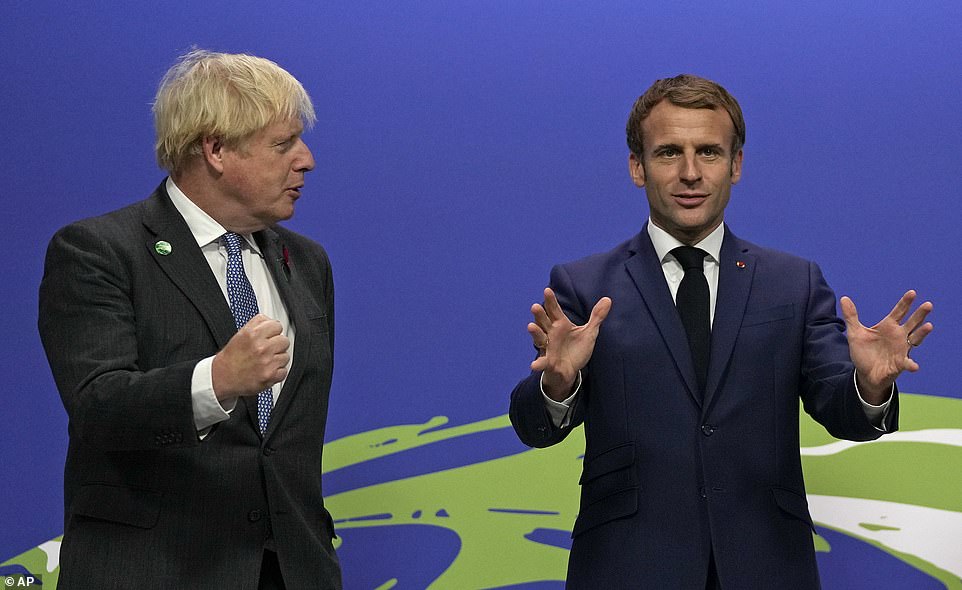 Back in Glasgow, the Archbishop of Canterbury was quick to apologise after suggesting in an interview with the BBC that failure to act at Cop26 could be graver than leaders who ignored warnings about the Nazis in the 1930s.

Justin Welby had told the BBC’s political editor Laura Kuenssberg at the Glasgow summit on Monday that world leaders ‘will be cursed if they don’t get this right’.

But teenage activist Greta Thunberg was not convinced anything would be achieved at the summit.

She criticised the ‘blah blah blah’ of world leaders at the global gathering, which she had ‘not officially’ been invited to despite being one of the most recognisable faces of the youth movement to prevent climate change.

Also not on the list and therefore not coming in – at least at first – was the Greenpeace vessel the Rainbow Warrior.

The ship was originally forbidden from sailing along the River Clyde, but port authorities changed their mind later in the day and allowed the boat to continue.

Activist Maria Reyes, 19 and from Mexico, was one of those who arrived aboard the famous Greenpeace ship. She warned the summit could not just be a ‘rich people’s conversation’.

Meanwhile, the Prince of Wales was painted as a James Bond-type character who could help fix the climate crisis by the PM. 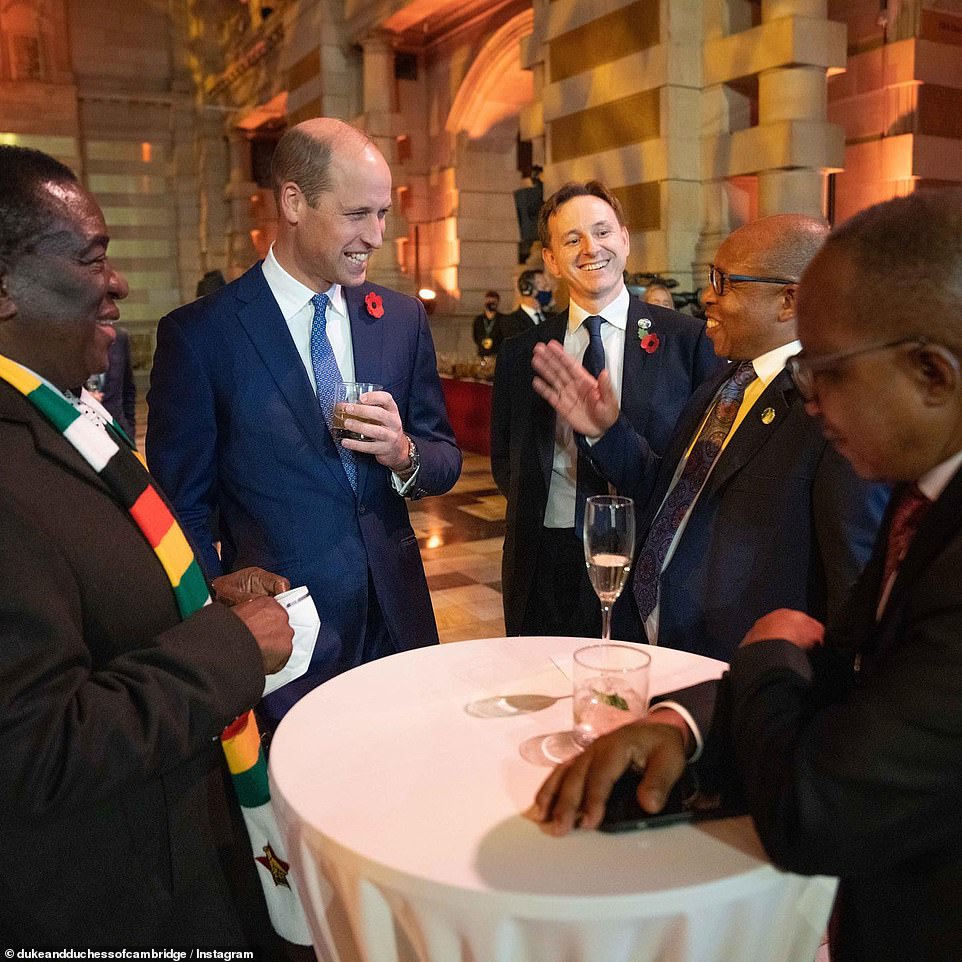 Earlier, Mr Johnson had likened the plight of the planet to the fictional British spy being strapped to a doomsday device and hurtling towards destruction.

And after listening to a message from the Queen, Mr Johnson is reported to have paid tribute to her son, who earlier delivered a speech to the summit.

The Prime Minister is reported to have said: ‘We have somebody luckily who drives an electric Aston Martin, as far as I know, and who has a plan that you will have heard earlier on to defuse the ticking time bomb and to get the private sector involved in greening the world, which I think was very very well set out today.’

A video appeared to show US President Joe Biden closing his eyes for around 20 seconds during the opening speeches in Glasgow.

While Mr Johnson was snapped at an unfortunate time with his eyes closed, but a No 10 source told The Mirror it was ‘total nonsense’ to suggest he was asleep and other photos showed him with his eyes open.

That did not stop shadow justice secretary David Lammy taking the opportunity to mock the PM however, as he tweeted: ‘Time to wake up @borisjohnson the world is burning. Sir David Attenborough is paying attention to the climate crisis, it’s time your Government did too #cop26.’

One Israeli minister was unable to attend the opening day of the conference because the summit was not wheelchair accessible.

Karine Elharrar wrote on Twitter: ‘To COP26 I came to meet with my counterparts around the world and promote a joint fight against the climate crisis. It is sad that the UN, which promotes accessibility for people with disabilities, in 2021, does not take care of accessibility at its events.

‘I hope that the lessons required to be learned tomorrow to promote green energies, remove barriers and energy efficiency will be the things I deal with.’

Her plight attracted a quick response from senior UK officials, with Foreign Office minister James Cleverly responding in a tweet: ‘I am deeply disappointed and frustrated that Minister @KElharrar could not access COP today.

‘The COP venue is designed to be accessible for all. I have spoken to the Minister about this and I look forward to meeting her tomorrow.’