Beloved actor Robbie Coltrane’s cause of death is listed as multiple organ failure on his death certificate, according to a new report.

The Harry Potter star died aged 72 on October 14. At the time of his death, he was reportedly suffering from sepsis, a lower respiratory tract infection, Type 2 diabetes, heart block and obesity.

These factors – combined with the organ failure – cumulatively led to his premature death.

Coltrane’s ex wife Rhona Gemmell registered his death in Glasgow, according to the Daily Star.

It’s understood he’d been unwell for some time leading to his death. 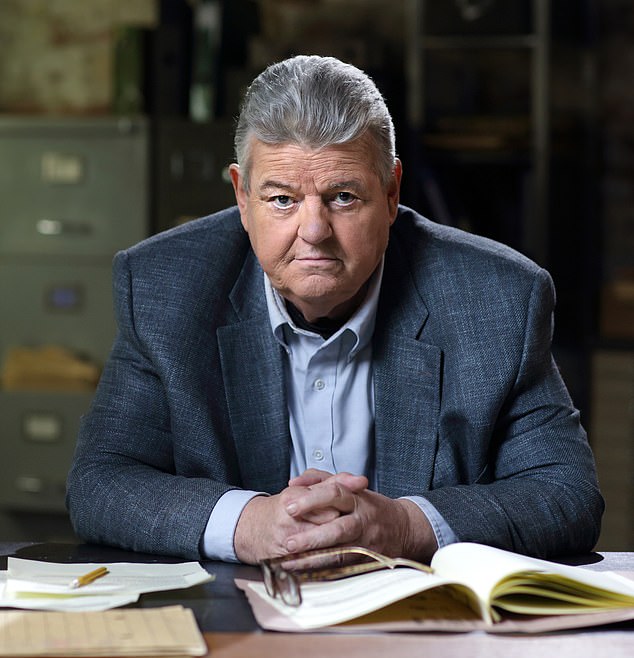 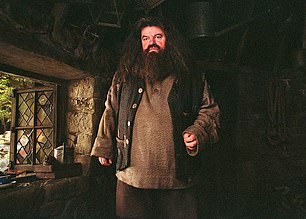 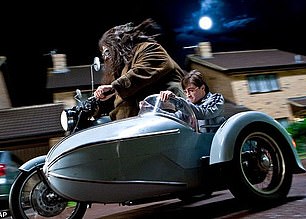 Coltrane played Hagrid, the Hogwarts Gamekeeper, in all eight of the Harry Potter films and was the first to be cast in the movies after JK Rowling personally picked him out 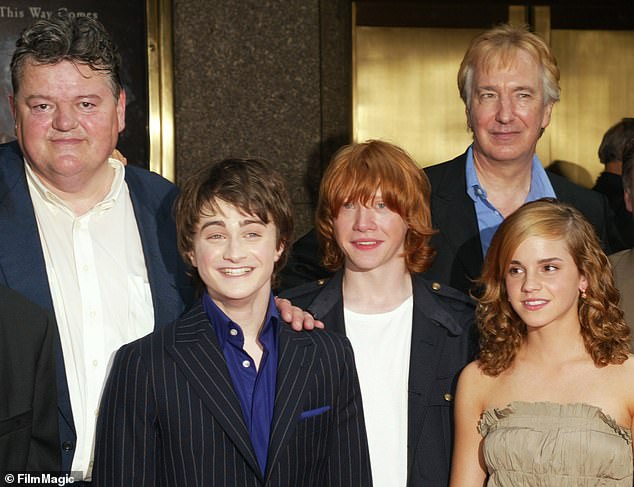 He was rumoured to have had serious health issues earlier this year after he was forced to pull out of London’s Comic Con in June due to medical reasons.

He won the Best Actor BAFTA three years in a row for his role as Dr Fitz as well as two BAFTA Scotland Awards. He even voiced the BBC adaptation of King Charles’ children’s book, The Old Man Of Lochnagar.

Coltrane leaves behind Ms Gemmell, who he married in 1999, sister Annie Rae and his children Spencer, who was born in 1992 and Alice, born in 1998.

He was one of the UK’s most-loved comedians before turning to acting, where his first major serious role was playing Fitz in ITV’s drama series Cracker. 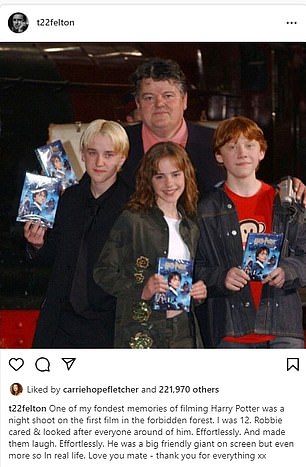 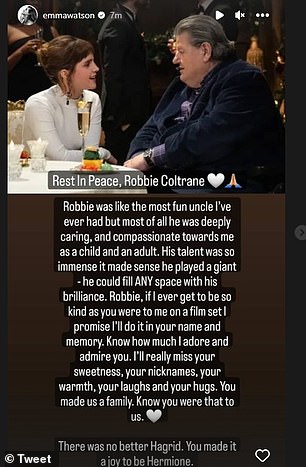 Tom Felton and Emma Watson were among the Harry Potter stars who paid tribute to Coltrane, who played Hagrid 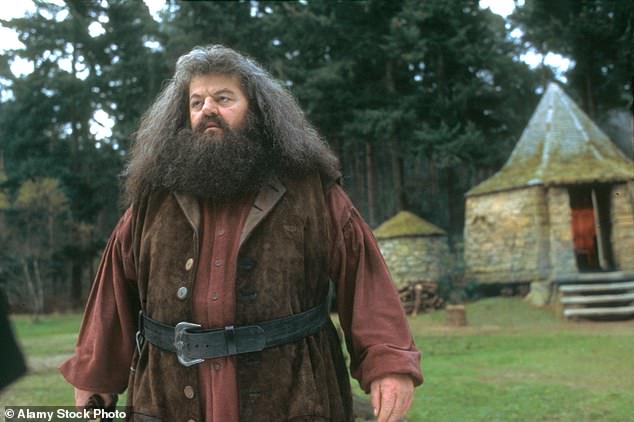 Coltrane’s agent Belinda Wright described him as a ‘unique talent’ and said the star died on Friday. She added: ‘Please respect Robbie’s family’s privacy at this distressing time.’

In a statement, she said: ‘My client and friend Robbie Coltrane OBE passed away on Friday October 14. Robbie was a unique talent.

‘For me personally I shall remember him as an abidingly loyal client. As well as being a wonderful actor, he was forensically intelligent, brilliantly witty and after 40 years of being proud to be called his agent, I shall miss him.

In his later years, he appeared less frequently in film and television, but returned to be interviewed for HBO’s Harry Potter 20th Anniversary: Return To Hogwarts – where he spoke of how his legacy as Hagrid would live long beyond him.

Speaking on the special, he said: ‘The legacy of the movies is that my children’s generation will show it to their children, so you could be watching it in 50 years’ time easy. ‘I’ll not be here sadly…but Hagrid will.’

After the shock news of his death, former co-stars and colleagues began paying tribute to the ‘one of a kind’ man.

Daniel Radcliffe remembered his Harry Potter co-star as ‘one of the funniest people’ and an ‘incredible actor’.

The actor, who starred in the lead role in the fantasy series shared fond memories from set in a statement, saying: ‘Robbie was one of the funniest people I’ve met and used to keep us laughing constantly as kids on the set.

‘I’ve especially fond memories of him keeping our spirits up on Prisoner of Azkaban, when we were all hiding from the torrential rain for hours in Hagrid’s hut and he was telling stories and cracking jokes to keep morale up.

‘I feel incredibly lucky that I got to meet and work with him and very sad that he’s passed. He was an incredible actor and a lovely man.’ 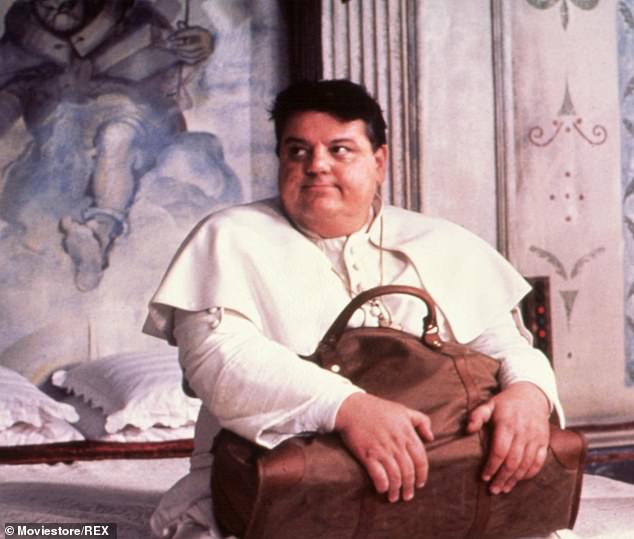 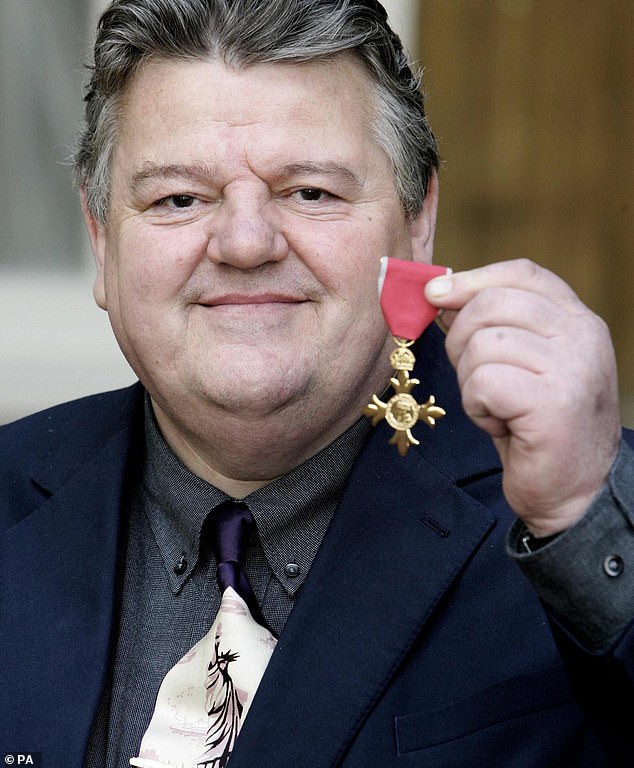 Emma Watson, who starred as Hermione in the franchise, released a heartbreaking statement on Instagram which said: ‘Robbie was like the most fun uncle I’ve ever had but most of all he was deeply caring, and compassionate towards me as a child and an adult. His talent was so immense it made sense he played a giant – he could fill ANY space with his brilliance.

‘Know how much I adore and admire you. I’ll really miss your sweetness, your nicknames, your warmth, your laughs and your hugs.

‘You made us a family. Know you were that to us. There was no better Hagrid. You made it a joy to be Hermione.’

Tom Felton, who played Draco Malfoy, said on Instagram: ‘One of my fondest memories of filming Harry Potter was a night shoot on the first film in the forbidden forest. I was 12.

‘Robbie cared and looked after everyone around of him. Effortlessly. And made them laugh. Effortlessly. He was a big friendly giant on screen but even more so In real life. Love you mate – thank you for everything.’

Warwick Davis, who starred alongside Robbie Coltrane as Professor Flitwick in the Harry Potter films, has paid tribute to the ‘always jovial’ actor who has died aged 72.

‘Always jovial, he brought warmth, light and laughter to any set he walked on to. RIP Robbie, Beloved Giant of comedy.’