The man portrayed in the film Hotel Rwanda as saving the lives of more than 1,200 people from genocide was ‘kidnapped’ while in Dubai, his daughter has claimed.

The appearance of Paul Rusesabagina, 66, in handcuffs in Rwanda’s capital on Monday prompted concern among some human rights activists who worried that the outspoken critic of Rwanda’s government was the latest example of the government targeting dissidents beyond its borders.

He had been living outside Rwanda since 1996, first in Belgium and then in Texas in the US.

Rwandan authorities have said they issued an arrest warrant for Rusesabagina to answer charges of serious crimes including terrorism, arson, kidnap, and murder, perpetrated against unarmed, innocent Rwandan civilians on Rwandan territory.

The authorities cited ‘international co-operation’ but gave no details. They did not say where or how he was apprehended.

Rusesabagina’s adopted daughter, Carine Kanimba, told the Associated Press she last spoke to him before he flew to Dubai last week but she did not know the exact nature of his trip. 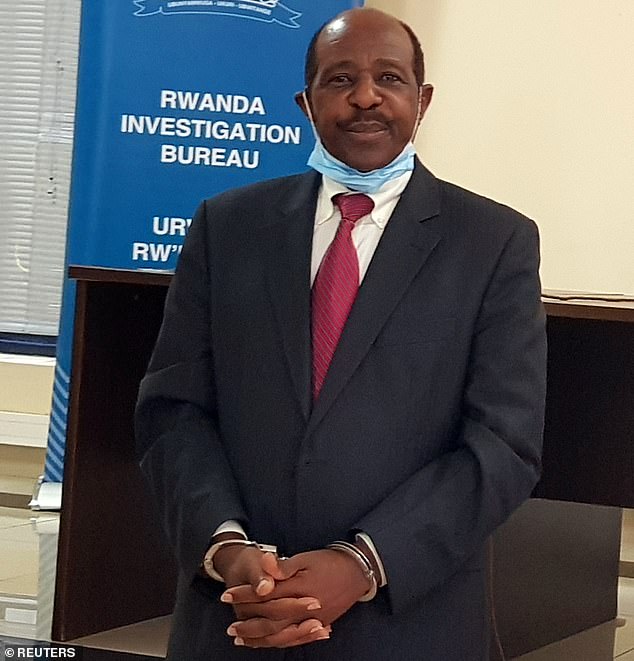 Mr Rusesabagina, was shown to the press in Rwanda’s capital, Kigali, on Monday by police wearing handcuffs and a face mask 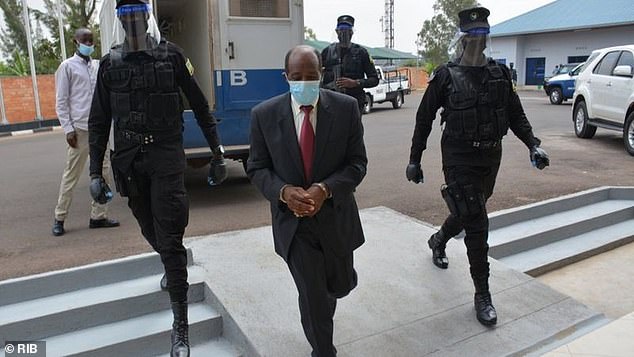 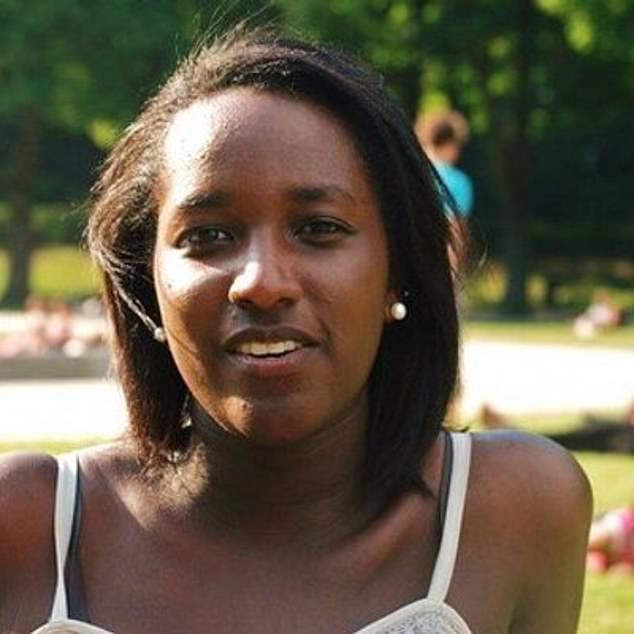 Pictured: Anaise Kanimba, the daughter of Paul Rusesabagina , who has been arrested on terror charges and is in custody in Rwanda

She did not provide evidence to support her claim that he had been kidnapped.

Ms Kanimba said his family was informed early on Monday that he was being held in Rwanda but they have not been able to speak to him.

They are worried the 66-year-old may not be getting his hypertension medication.

Rusesabagina is a Belgian citizen and a permanent resident of the United States.

She said her father has long been a target because of his criticism of the Rwandan government.

‘What they’re accusing him of is all made up,’ she said.

‘There is no evidence to what they’re claiming … We know this is a wrongful arrest.’

It was not clear when Rusesabagina would appear in court or what evidence Rwandan authorities have to support their charges.

Police said Rusesabagina is ‘suspected to be the founder, leader, sponsor and member of violent, armed, extremist terror outfits including the Rwanda Movement for Democratic Change (MRCD) operating out of various places in the region and abroad’.

The MRCD in a statement on Monday condemned the arrest of Rusesabagina, which it identified as one of its leaders.

It describes itself as a political platform.

Interpol did not immediately respond to questions from the AP. 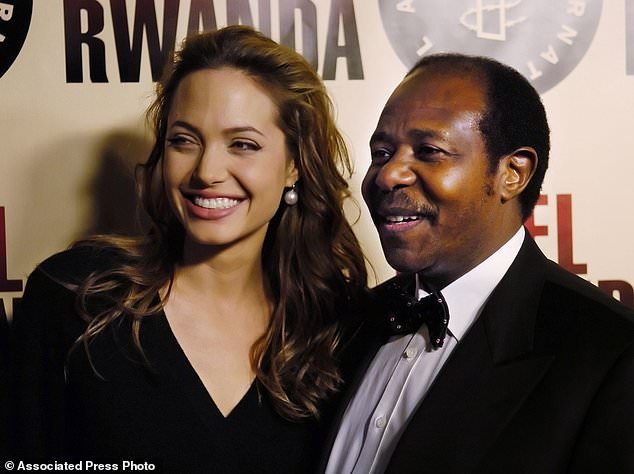 In the 2004 film ‘Hotel Rwanda’, Mr Rusesabagina used his influence as a manager of the Hotel des Mille Collines, to shelter more than 1,200 Tutsis in the hotel’s rooms 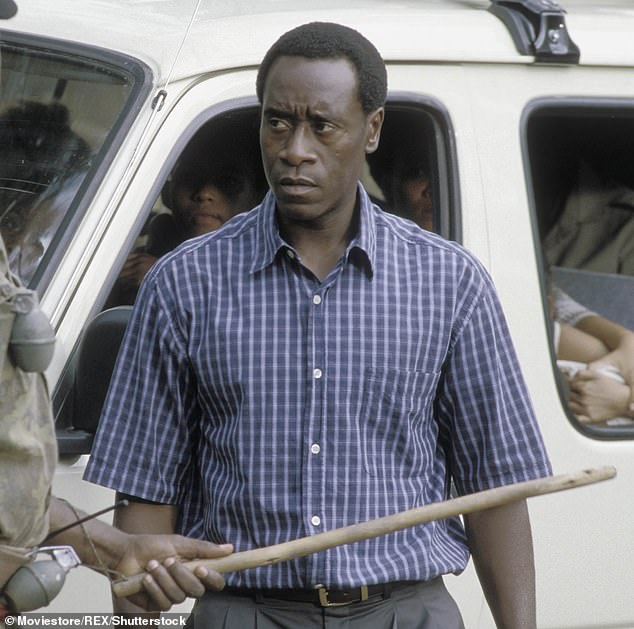 A hero who saved 1,200 lives during the 1994 Rwandan genocide and was played by Don Cheadle in the film Hotel Rwanda is arrested on terror charges

Police and authorities in Dubai, a city-state in the United Arab Emirates, did not immediately respond to a request for comment. However, Rwandan President Paul Kagame maintains a close relationship with Dubai, turning up often to the World Government Summit it hosts and other events in which moderators largely avoid discussing his government’s targeting of dissidents.

The state-owned RwandAir has direct flights between Dubai and Kigali.

While experts believe Dubai is among the most surveillance heavy cities in the world, state organised kidnappings have happened there.

Most recently, the family of an Iranian leader of a militant dissident group says Iran kidnapped him from a Dubai airport hotel just weeks ago and brought him back to Tehran to face charges that carry the death penalty.

In Belgium, authorities had no information about the circumstances of Rusesabagina’s arrest and said they were not involved.

In Washington, the State Department said that ‘we are aware of the arrest of Paul Rusesabagina, and we are monitoring the situation. We refer you to the Rwandan government for additional information’.

Rwanda’s government has in the past been accused of hunting down dissidents overseas.

South African investigators have said the government was directly involved in the killing of Colonel Patrick Karegeya, an outspoken critic, in Johannesburg in 2014.

‘Any person still alive who may be plotting against Rwanda, whoever they are, will pay the price,’ Mr Kagame said after the killing.

He has called Mr Kagame’s government a dictatorship and urged Western countries to press the government to respect human rights.

Rusesabagina has won numerous international honours including the United States Presidential Medal of Freedom, which president George W Bush awarded him in 2005, and the Lantos Human Rights Prize in 2011.

‘I believe it is a travesty that a human rights champion like Paul Rusesabagina should be captured, detained and held in the way he is being held,’ said Katrina Lantos Swett, president of the Lantos Foundation for Human Rights and Justice.

‘This should raise a lot of deep concern and scepticism on behalf of a lot of people.’

The 2004 Oscar-nominated film Hotel Rwanda showed Rusesabagina, a Hutu married to a Tutsi, as using his influence as a manager of the Hotel des Mille Collines to allow more than 1,200 Tutsis to shelter in the hotel’s rooms.

But the Rwandan government disputes Rusesabagina’s story about saving people during the genocide, in which more than 800,000 Tutsi and Hutus who tried to protect them were killed by Hutus.