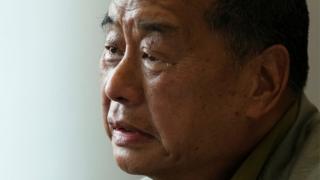 He was 12 years old when he fled his village in mainland China, arriving in Hong Kong as a stowaway on a fishing boat.

Like a number of the city’s famed tycoons, he went from a menial role, toiling in a Hong Kong sweatshop, to founding a multi-million dollar empire.

But unlike others who rose to the top, Jimmy Lai also became one of the fiercest critics of the Chinese state and a leading figure in Hong Kong’s pro-democracy movement.

He was born in Guangzhou, a city in southern China, to a wealthy family that lost everything when the communists took power in 1949.

From working odd jobs and knitting in a small clothing shop he taught himself English, eventually founding the international clothing brand Giordano.

The chain was a huge success. But when in 1989 China sent in tanks to crush pro-democracy protests in Beijing’s Tiananmen Square, Mr Lai began a new journey.

He established a publishing house, launching a string of pro-democracy titles that now include Next, a digital magazine, and the Apple Daily newspaper.

In a media landscape increasingly fearful of Beijing, Mr Lai has became a persistent thorn for China both through his publications and personal columns and their open criticism of the Chinese leadership.

It has seen him become a hero for many residents in Hong Kong. He is a rare rebel tycoon who dares to stand up to Beijing. But on the mainland he is viewed as a “traitor” who threatens Chinese national security.

In recent years masked attackers have firebombed Mr Lai’s house and company headquarters. The 71-year-old has also been the target of an assassination plot.

But none of this has stopped him from airing his views robustly. He has been a prominent part of the city’s pro-democracy demonstrations and was already arrested twice this year before Monday’s arrest under the new national security law.

“I’m a troublemaker. I came here with nothing, the freedom of this place has given me everything,” he told AFP in an interview in June.

“Maybe it’s time I paid back for that freedom by fighting for it,” he said.