Against a backdrop of daily protests, Chileans are organising neighbourhood gatherings to discuss a way forward. 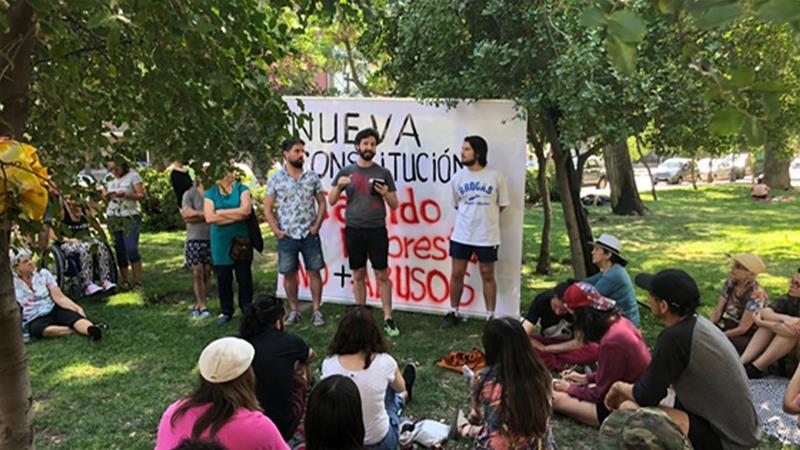 Santiago, Chile – As the smell of tear gas lingered in the air, the remains of the previous night’s barricades still blocking the roads, bookseller Daniel Gonzalez sat with dozens of other Chileans in Santiago’s central park, Parque Forestal, on a recent Sunday afternoon.

“We are sharing opinions and ideas, as we don’t want to go back to where we came from before,” Gonzalez told Al Jazeera as he and his neighbours discussed a way forward in the country, which is experiencing its worst unrest in decades.

For three weeks, Chileans have taken to the streets, protesting against rising inequality and demanding the resignation of President Sebastian Pinera. More than 20 people have died in the unrest, including several killed by police or military officials. Looting, vandalism and arson have also caused billions of dollars of damage to businesses and crippled parts of the capital’s public transport system.

Against this backdrop, however, small gatherings like the one in the Parque Forestal have popped up, with residents seeking to constructively build upon the unity seen on the streets.

Some of these meetings focus on set topics: From support groups on mental health and human rights, to lectures on political reforms. Gonzalez’s group shared lunch and talked about general issues. They also planned workshops to analyse, understand and propose policies, to collect their ideas and submit them to local council members. 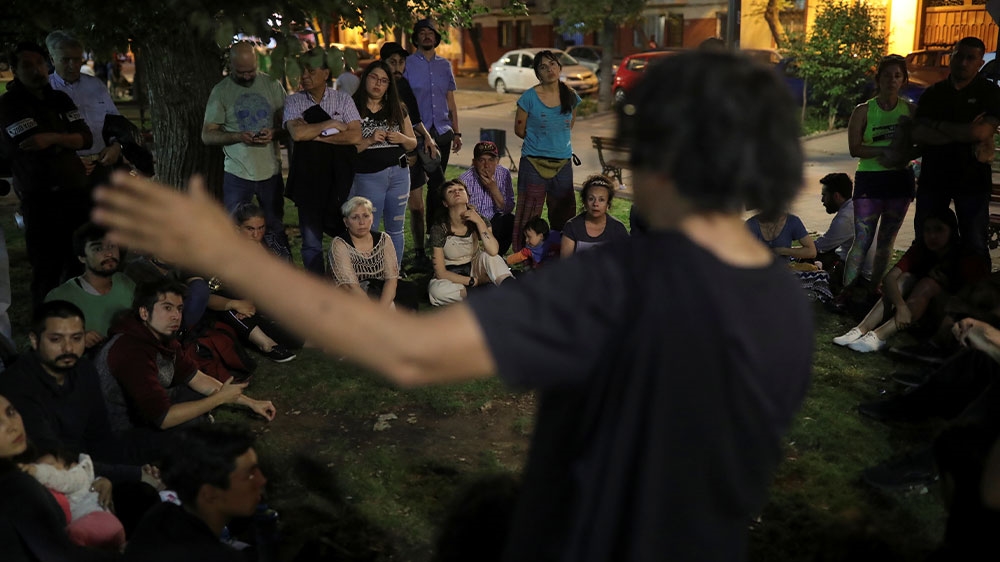 One of Gonzalez’s neighbours, Pablo Venegas, said he believes that reclaiming public areas to create platforms of discussion is important.

“These spaces disappeared during the dictatorship,” Venegas said, referring to the 17-year military dictatorship of Agusto Pinochet, which ended in 1990.

“Now, we have to take them back,” he told Al Jazeera. “As a community, this is the time we need to come together and participate in these types of activities. This is an opportunity to rebuild.”

The Parque Forestal group now has more than 100 members, who meet every Sunday. They also have a WhatsApp group used to alert each other of disturbances, and to announce plans to attend protests together.

While the Parque Forestal group deliberately formed to reflect and progress on the protests, other communities grew out of sheer necessity. 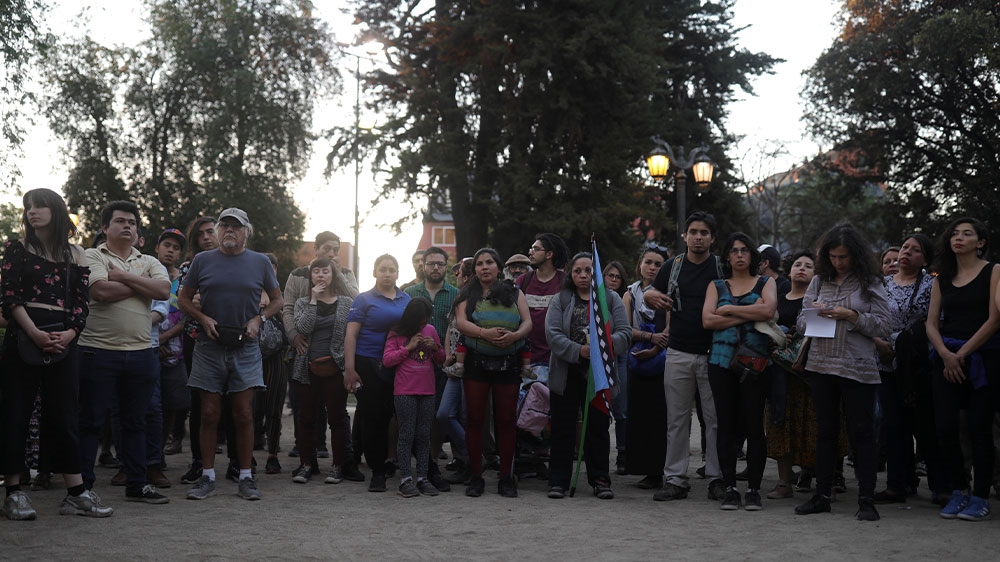 The residents said the military, who had been deployed as part of a now-lifted state of emergency, failed to adequately respond to the fires.

“They weren’t doing their job. We were left alone,” said Alejandra Meza, a 48-year-old teacher who lives in the area.

Meza and her neighbours decided to take it upon themselves to guard the area.

They spent the first week of protests defying curfew and patrolling the streets at night to protect local shops from vandalism.

Having grown up during the Pinochet dictatorship, Meza said she was unsettled by the military presence and curfew obligation. She said she found security in the presence of her neighbours, who supported the protesters, despite the initial violence. 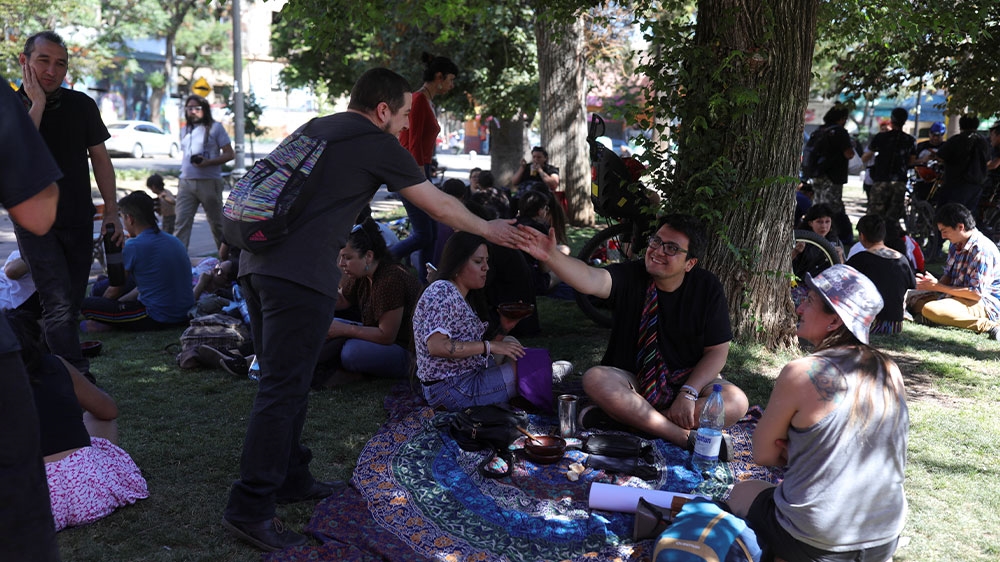 Even though the nightly patrols are no longer needed, Meza and her neighbours continue to meet.

“Without this movement, we wouldn’t have achieved this,” she said, adding that the neighbours never spoke to each other before the protests. “This is the best thing that’s come out of it, we have become less individualistic and we are taking the time to care and look out for one another.”

Meza said her community has already arranged a carpool to help those who are affected by the closure of the San Jose de Estrella metro station, which is not expected to reopen until next year.

Back in the city’s centre, Gonzalez, the bookseller, walked a few blocks to set up his stall after the Parque Forestal meeting.

He crossed a busy junction with caution – all the traffic lights have been destroyed during the unrest. Broken glass and rubble from barricades have been swept into the curbs.

The street where he works is a central point for clashes between protesters and police, which has prevented him from working. He has only recently been able to set up his stall, but he must stay alert in case of further disturbances.

It has been a difficult time for Gonzalez, but he remains positive about the changes taking place.

“If the future generations do not have to live with the same problems that we have had, it will all be worth it,” he said.