CHINA once chillingly boasted its nuclear submarines could strike the US, wipe out four cites, and kill 12million people.

And its shameful brag is more terrifying than ever as the world waits with bated breath to see if the Communist Party state will invade Taiwan. 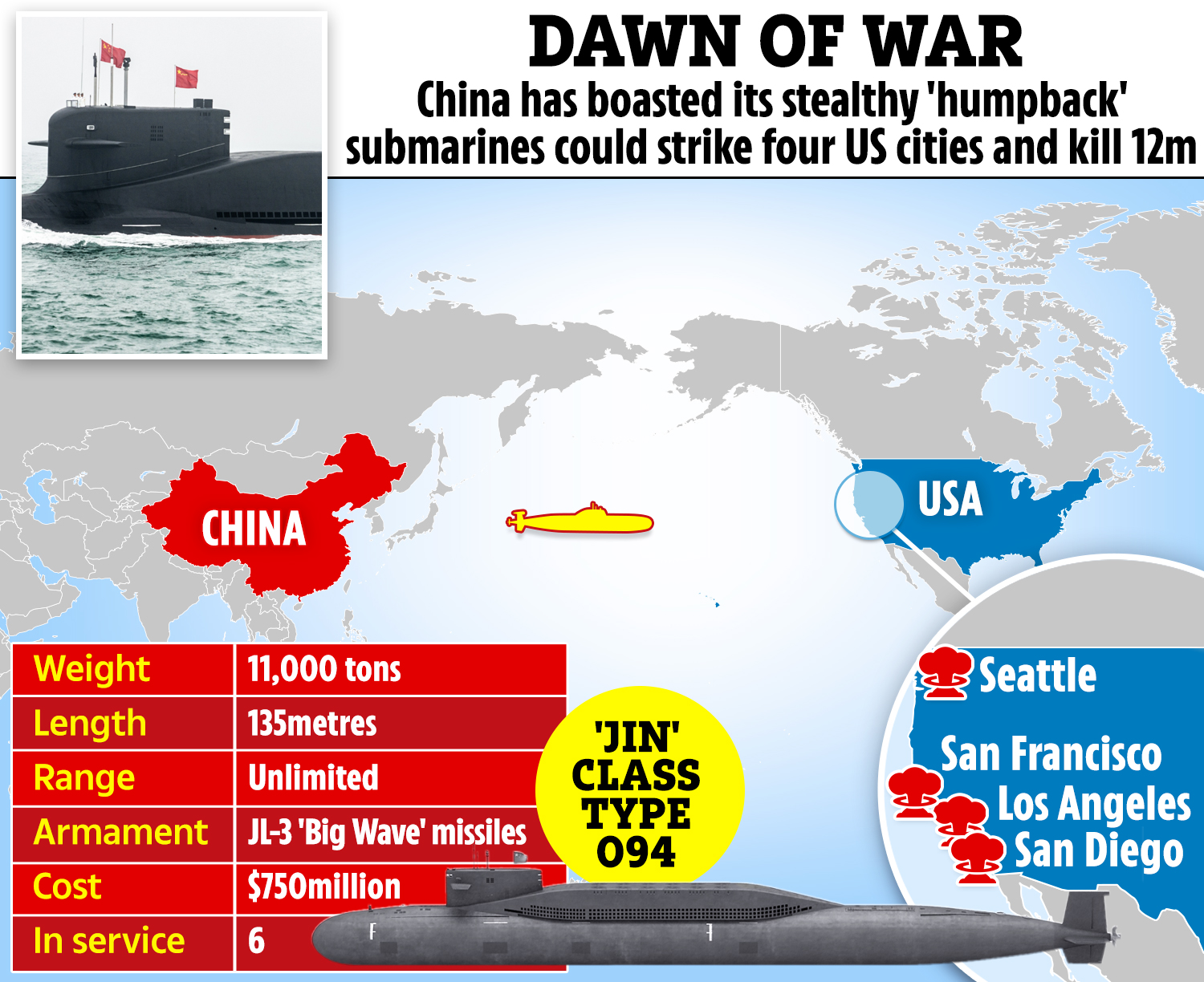 China attacking the small separatist island could potentially set the dominoes falling for a conflict that could spiral into World War 3.

US forces have pledged to defend Taiwan, even as last week Chinese leader Xi Jinping insisted he would have his way and succeed in "reunification".

And a full scale conflict would likely become nuclear as the world sits on what experts warned The Sun Online is the "precipice of war" and faces the "realistic" possibility of military action.

China is also believed to have been quietly upgrading their distinctive "humpback" submarines – the Type 094 Jin – to make them more hard to detect and to conceal their numbers.

Each potentially packing 12 of China's latest "Big Wave" nuclear missiles into their distinctive "hump", the nuclear-powered boats are a weapon pointed squarely at one enemy – the US.

Communist Party officials made this clear with a series of disturbing and brazen boasts about the submarines – and how they would be used in a war with Washington – in state media back in 2013.

The twisted article – alongside a nuke map fantasizing about a strike on Los Angeles -was included in a dossier compiled by the US-China Economic Security Review Commission, an agency tasked with monitoring Beijing.

The report notes that the Jin submarines give China the ability to strike against Alaska, Hawaii and the West Coast from deep in the Pacific, or to hit "all 50 US states" if launched from east of Honolulu.

And in the article published in a Communist Party newspaper hailing the "humpback" subs, four cities are named as "main soft targets".

They were Seattle, Los Angeles, San Francisco and San Diego – which have a combined total population of 7.7million.

And perhaps expanding out the destructive power of the Jin to other cities, the article boasted just one vessel could "could cause the destruction of five million to 12 million people".

To increase the destructive effect, the main soft targets for nuclear destruction in the United States will be the main cities on the west coast, such as Seattle, Los Angeles, San Francisco, and San Diego

Alongside the feature ran a graphic displaying the devastation of five warheads dropping from one missile on the city of Los Angeles.

The five strikes are focused on downtown – potentially maximising the loss of life.

And it estimates within the first day after the strike, there would be nearly 400,000 fatalities in the City of Angels and almost 650,000 injuries – with the rest of the deaths coming from radiation, injury and societal collapse. 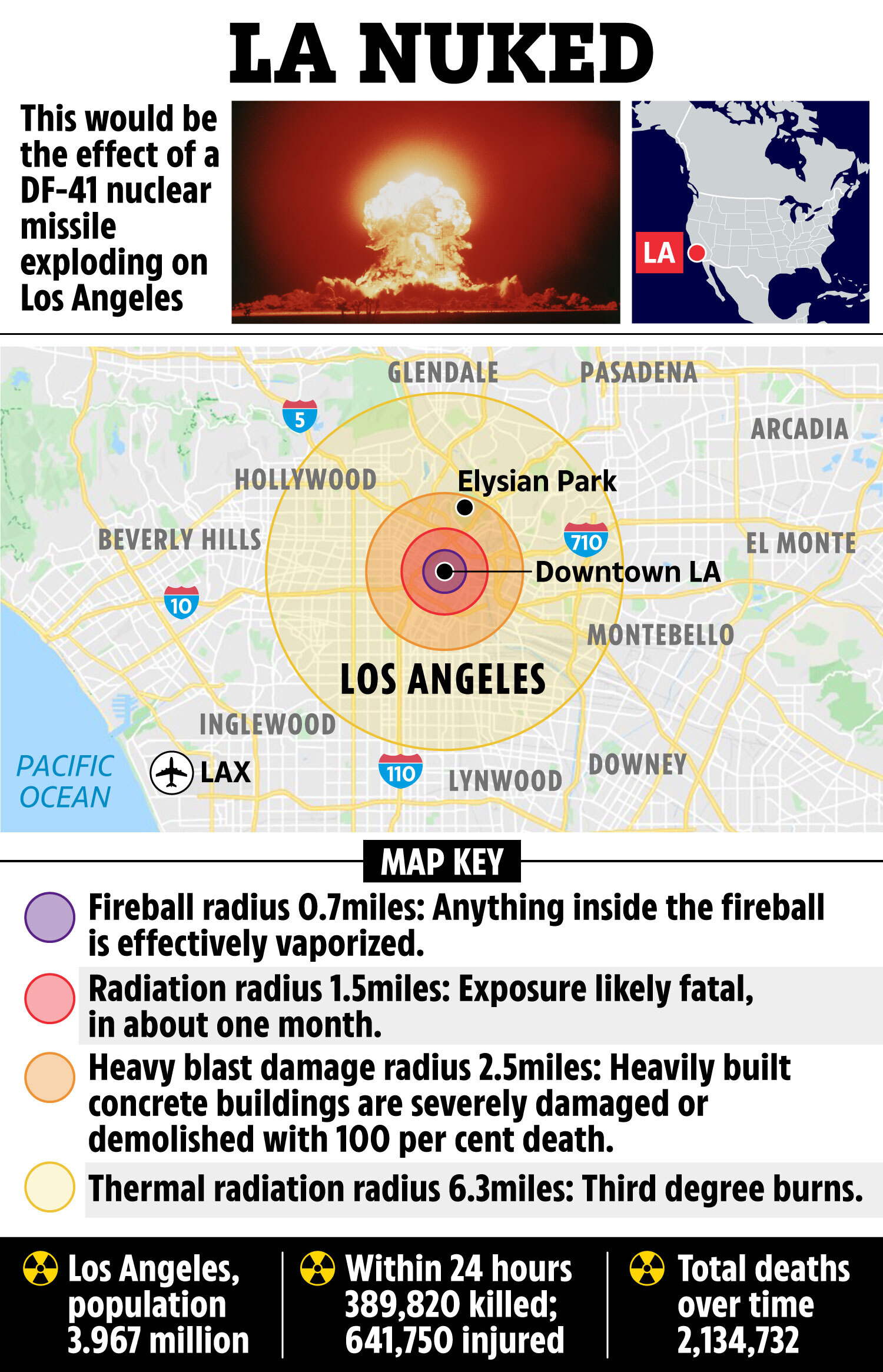 Chinese state media is often seen as the unfiltered mouthpiece of the Communist Party, striking a more fiery tone even as the regime attempts to be more measured in its rhetoric.

Last week one of China's leading newspapers threatened to "strike any time" on US troops which were revealed to be training soldiers in Taiwan.

The US has always pledged to defend the island from China.

But should Beijing launch an attack, Washington will face a devastating choice about sticking to its guns about Taiwan or risking a potentially global war with China.

Taiwan insists it is a independent nation after splitting from mainland China in 1949 – something that has always enraged the Communist Party.

China is believed to have been preparing for a total war situation against the US – while Washington has been bogged down learning how to battle small scale insurgencies in the Middle East.

And meanwhile, some analysts have suggested that China could find itself bogged down in a Vietnam War-esque conflict should it invade Taiwan.

Barbara Kelemen, Associate and the lead intelligence analyst for Asia at security intelligence firm Dragonfly, believes some type of Chinese military action against the island is becoming a realistic prospect.

She told The Sun Online: "Some type of Chinese military action against, or affecting, Taiwan is becoming a more realistic prospect.

"This is because the US has taken several steps to strengthen its relationship with the island.

"US President Biden’s latest actions seem to indicate that he sees supporting Taiwan as a pillar of a broader geopolitical strategy to counter China’s growing power in Asia, and his stance has been interpreted by Beijing as being increasingly aggressive." 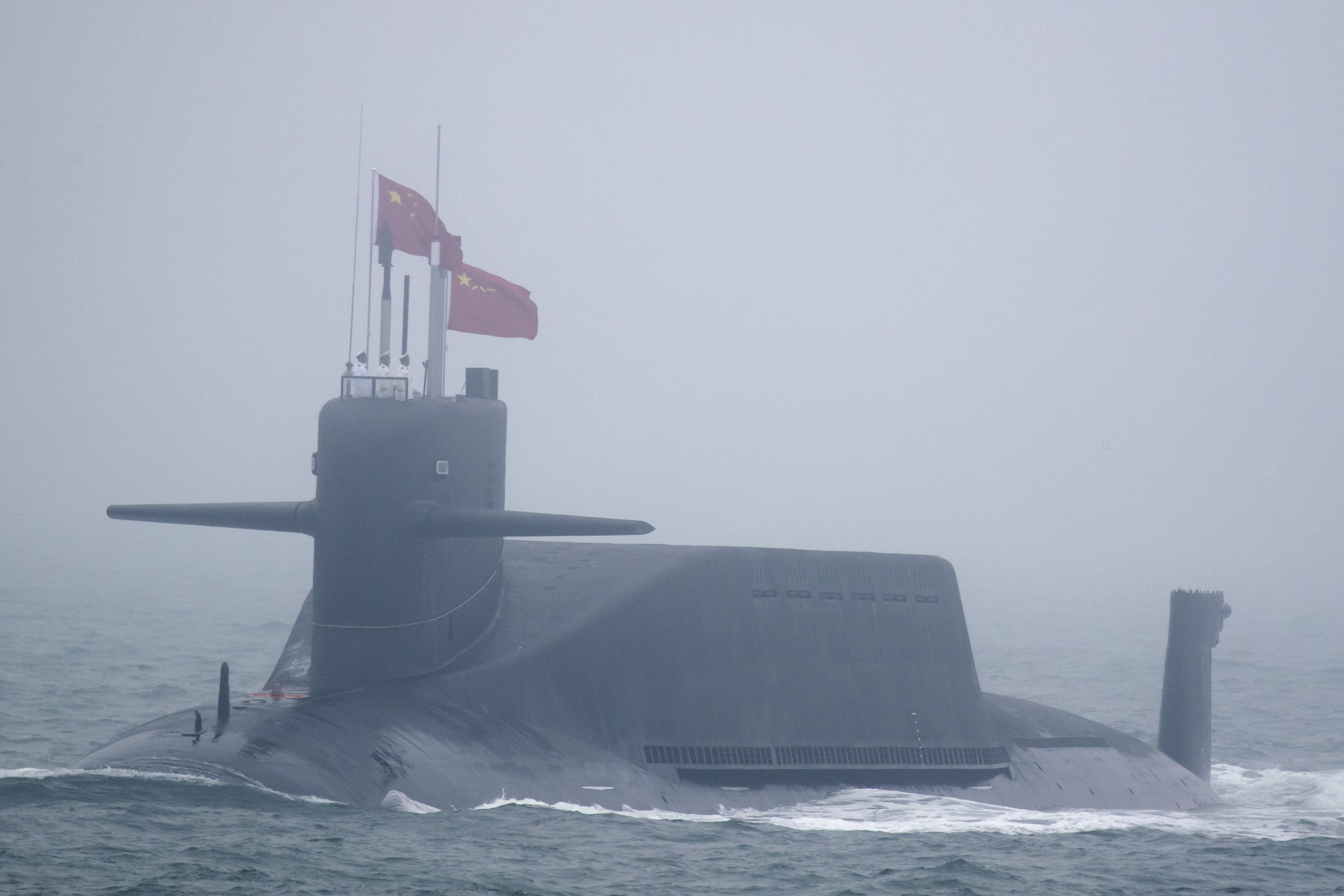 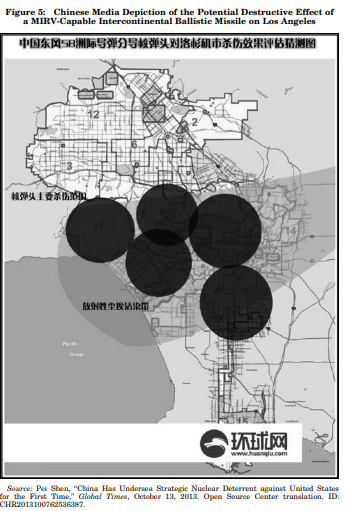 Among the potential scenarios, Ms Kelemen said China could move to seize outlying islands either in the Strait or South China Sea as well as carrying out cyber attacks on critical state infrastructure.

And previously, Sam Armstrong, of the Henry Jackson Society,told The Sun Online relations between Washington and Beijing have "never been worse".

He said: "What China is doing right now is irresponsible, it’s dangerous and it threatens to spill over from what is a localized conflict into a massive and deadly armed war.

"The very real risk of conflict isn’t just a threat in or around Taiwan, but to the people living in the US, its allies, and Europe.”

He added: "The moment that China makes a nuclear threat, the world is standing at the precipice of a nuclear war. A conflict between China and the United States would be the most devastating conflict we’ve ever seen.”

China is also focused on ramping up its nuclear weapons arsenal – with its own worrying arsenal of around 350 weapons dwarfed tenfold by the US stockpile of 3,750.

The Communist regime is also busy constructing nearly 300 new nuclear missile silos, while it is thought to possess around 320 nuclear warheads,

In another article, Hu Xijin, the editor of the Global Times, said "the number of China's nuclear warheads must reach the quantity that makes US elites shiver".

"We must be prepared for an intense showdown between China and the US,.

"In that scenario, a large number of Dongfeng-41, and JL-2 and JL-3 (both intercontinental-range submarine-launched ballistic missile) will form the pillar of our strategic will.

"The number of China’s nuclear warheads must reach the quantity that makes US elites shiver should they entertain the idea of engaging in a military confrontation with China."

Last month UN Secretary-General Antonio Guterres warned humanity was on the brink of "nuclear annihilation" with the threat reaching its highest boiling point in forty years.

He urged nations that have "stockpiled nearly 14,000 nuclear weapons" to sign the Comprehensive Nuclear Test Ban Treaty to avoid an international crisis.